I've been brute-forcing sprite flag numbers for a while and I gave up after like 2000..

To understand sprite flags, it's easiest to learn how binary numbers work. Each place value in binary is double the place value before it. Like this:

I guess im just being a idot? I thought you could test for multiple flags at ounce by saying fget()==the sum of your flags. but am I thinking of how you can draw the map useing map() with the sum of your flags? I thought I could of saved some tokens by testing both so if ethier was right I would work.. Am I doing it wrong or you can't test for muliple flags with fget()?

I just realized that I was being a Derp.
I had a if statment:

and I had map tiles some with flag 7 on, and some with flag 6 on. And I was testing if both of the flags were on even though that would never be the case..

Like I said before I was thinking about how map() automaticly will print it if it has any of the flags aslong as it's the right sum it becomes a or statement (I think if I remebred hopefully.) but here I was using it for a if statement and of course that won't work :/

thought I could save some tokens not having to use a or. sigh...

I never thought about just testing it as a boolein even though that's what im doing every time I test with fget, once again thanks for the help.

Im making a game where there's shading on the bottom of tiles and it needs to add it in if there's flag 7, or flag 6 beneath a tile. 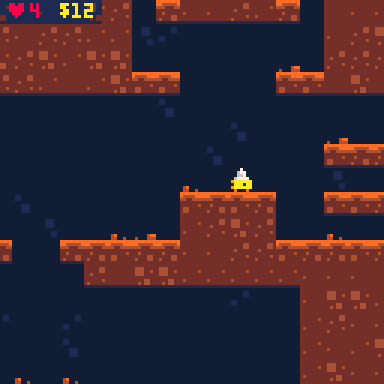 That makes sense what you're using it for. Glad you figured it out!

Also, looking at your sample code, one thing you might notice that a lot of people do is when they have a for loop inside another for loop, they'll often use i for the first counter variable and then j for the second one. Like this:

Of course what you're doing works perfectly well, so don't change it if it's doing the job for you! :D I only mention it because you will see other programmers using that style a lot and doing it yourself means other programmers can quickly scan your code and that style will be familiar and very readable to them.

You can also use band(), bitwise AND, operator to determine if more than one needed flag is flipped.

Working off of the binary representation @MBoffin provided lets work up an example:

What we do with band() is apply a logical AND to two numbers.
To see if a sprite has those two flags set you use band() with the flag value you are looking for and your sprite's flags value. You will get your desired value back if the flag(s) you are looking for are set.

This is especially useful for when you are using many flags on your sprints and need to check a subset of them being set. 1 flag is easy, it's built in to fget(), but 2 or more is a bit more of a pain.

--It seems inline code formatting isn't working in the bbs

Thanks guys, Im just trying to compress my game as much as possible because I'm going to need every token I can get