Venture through 8 levels trying to collect as many coins as you can!
Coins are really useful because not only between levels can you buy power-ups,
But there also your life and the more you start dying the more you lose..

You can also try to go for good scores as well,
Do do you want to try and collect every coin? Or try and march through enemies as
fast as possible?

When in a level

When in a menu

Restart (Sets you back to after title)

These shiny collectables are worth 1.

Red Coins are a bit rarer and they are worth 8.

Power-ups can be bought between levels. But you might not want to
always buy them because then you will have less lives for later..
Once you buy a power-up you can find it in the next level.

This Power-Up is 8 coins and instead of dying when you get hit,
You will tank it like a boss and keep on going!

For 16 coins you gain the ability when you press z to shoot
energy blasts! use this to snipe enemy's out of your way!

Lastly for 16 coins you can ignore damage for a while!
(Comes with free bopping jam.)

The main protagonist of the game!
Can jump, Climb, Run, and most importantly:
Be cute. Go get them!

This is the most basic creature in the game,
So basic that they don't even look both ways before
jumping off a ledge. just look at those eyes..

These sprouts seem a little bit smarter than their more basic form.
Before they jump off a ledge they turn around like the true warrior they are!

These grotesque creatures are what happens when a sprout lives in a cave
for too long.. (Best not to think about it.) They are more aggressive than sprouts,
So aggressive that they will chase you down!

I don't even know how this creature was made..
They have a blaster on their face and they seem to be part machine...
Watch out!

Kill these suckers for some coins!
Instead of trying to kill you they seem to want to run away..

These random birds will fly out of nowhere, Just to relive them selfs on your
corpse.. ooooof.

Here's some helpful notes to explain how scoring is kept.

Score is equal to highest coin count before death,
BestTime is not saved.

(Combined time is time spent playing, siting in the menus like the shop
or shop prompt does not count. this makes sure that you don't have to mash
through menus and more time strategizing if you want a powerup!)

This is my first game and thanks for playing it!
Im well aware that it's very wonky but hopefully it's still fun.
Feel free to remix it, Just make sure it's cool! :D 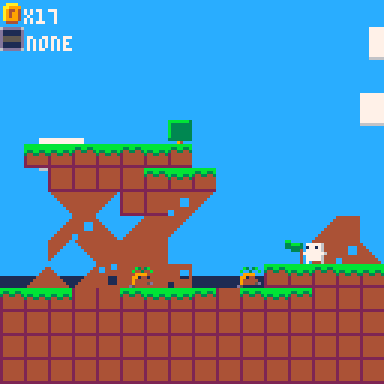 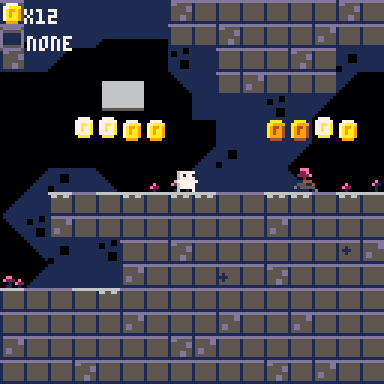 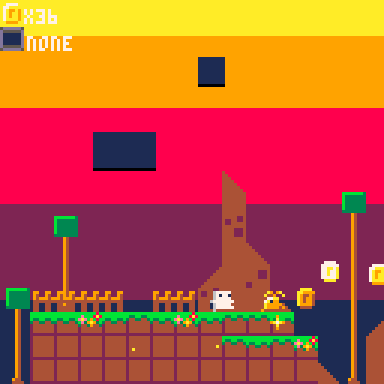 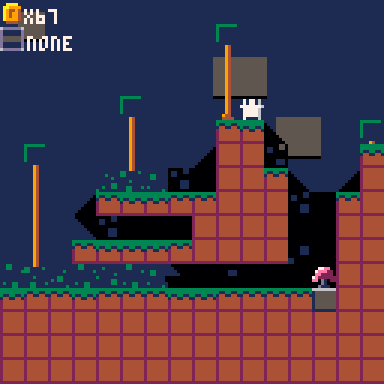 Jumping is a little wonky. Look to see how Super Mario does it in his game.

Also cannot scroll left once you have scrolled right.

Suggest button (O) to jump as it is not being used for anything else. Using up arrow can interfere with fine movement player is making with LEFT and RIGHT arrow.

Looks good so far for a platformer.