I discovered Pico-8 because I ordered a PocketCHIP, so in my mind, I'm making games with a handheld in mind...but that's just me, for all I know.

How and where do you most often play Pico-8 games?

On your living room TV with controllers?
On your PC?
Just using the keyboard?
Some custom housing you've made for your Pi with joystick and buttons?
...?

Just wondering so that I might be able to do some testing with alternative devices and setups.

It seems like the Pico-8 will get to other platforms at some point so it's good to think about where people when designing your game.

Good question! I play on a laptop at a desk with a fake NES controller, or with the keyboard if I'm in a hurry/in the browser.

I should totally put PICO-8 on my HTPC though; why haven't I thought of that before??!

UPDATE from years later (because this thread got bumped again and hey why not): I now prefer to play on a Raspberry Pi I have hooked up to my TV, using a wireless imitation SNES controller. The Raspberry Pi is running RetroPie so everything is controlled via the SNES controller; I don't even have a keyboard hooked up to it. This works great with the -splore startup option, but there is one thing still missing in PICO-8 to fully accommodate this: gamepad hotplugging; if I step away and the wireless controller turns off after inactivity, PICO-8 doesn't recognize the controller being "plugged in" again and I have to ssh in to shut it down properly :D

I play exclusively on PC with the keyboard. I am not used to controllers at all and I simply think that PC is the handiest platform of all!! : )

I've always loved the fantasy console thing and for me that means controllers so I use two fake NES controllers as well :D Works a treat with the pi plugged into a big tv as it really feels like it has its purpose :) I also just bought the pocket CHIP and am really excited to use it but I got it for on the move Dev :D just out of interest has your chip come yet? Mine hasn't even shipped I don't think :(

I don't think my PocketCHIP has shipped. I got charged for it but haven't gotten any notice for anything...kinda weird, actually. Usually there's a "Thanks for ordering" receipt or something.

I'll have to look into how to get P8 into something that I can hook into the TV. Sounds like a great way to play!

the pocketchip has composite out for tv! you can also buy addon boards for hdmi or vga out

im so excited for my pocketchip i can hardly contain myself

@Eduardolicious Oh that is awesome to hear! I'm so hyped to be sitting on the train making a game ;) probably end up emailing myself the cartridge and testing it on the pi with the controllers :D
@morningtoast I did get two emails confirming my order of the chip but I ordered it last week, were you a kickstarter backer?

@podfish - I wasn't a backer, just went to the site and pre-ordered. I'm sure backers get their's first. As long as mine comes in June, I'll be happy. That's a long wait but hopefully worth it. At least I should have a few games made by then.

@morningtoast I think they are making them all at once? I got the impression they had to buy in huge bulk and this is the first batch being released? I'm not sure. Found a super awesome 5" notebook laptop thing today but the battery on it is dead, would have been such an awesome portable pico-8 machine :( Had 2 USB ports too, perfect for the NES controllers.

p.s do you know if the pico-8 can support 4 controllers now? Someone posted something about it the other day but I can't find the post now.

I'm going to use my PocketCHIP... once they start shipping next month.

My Picade fits really well for Pico-8, I'm really happy with it, but it's only for playing that's also why I've configured the RetroPie interface to either launch pico-8 with a cart or in Splore mode, which is great because you can do everything with just 4 buttons and 4 directions. For programming and testing new release I mostly use my laptop as it's my main computer, but I have a secret project, I hope to make it before the end of the year, but it's going to be fun :)

I also discovered Pico via pocket chip. When I went to buy pico-8, imagine my delight when I discovered that my purchase of voxeltron (a long time ago!) entitled me to Pico for free!

I play on my laptop but want to get a pocket chip (or maybe GameGirl). I'm posting this from my phone and wish there was a native way to play, haven't yet experimented with the bookmarklet mentioned in another thread, but would love to play on my phone.

I was planning on playing some games on my GameShell from ClockworkPi, backed it a few months ago on Kickstarter. It's gonna be great for playing and sharing my games with friends who aren't computer-savvy, but I haven't looked into seeing if I can edit code on the fly. If anything, I'd have to connect a BT keyboard since it doesn't have a QWERTY.

Just bought a PocketCHIP though based on the glowing reviews above :D

Mostly on the computer, but more often than I'd like to admit on this site on phone's browser.

I'm mostly a PC player at this point. The PocketCHIP turned out to be a big disappointment. The form factor just didn't lend itself to playing games long term. Still a cool little gadget, though...just need to find a good use for it.

The games I play through the phone browser are only the ones I've converted myself so the controls are better. Since the output for web is just normal JS, you can bend it to your will pretty nicely.

I "ported" a few of my own titles over to use nice, big control buttons. And better yet, those buttons adapt to the need in the game. So if you don't need 4-way dpad, it just shows 2 buttons...and so on. Just visit these on your phone. But know that audio support seems wishy washy. On my iPhone everything works great but have gotten reports that Android is less than stellear.

I've scripted the rotary encoder to send Left/Right keypresses to PICO-8 upon turning it, allowing me to quickly browse things in my custom PICO-8 apps.

I'm planning to make a DIY PICO-8 handheld with my Raspberry Pi, and also on using PICO-8 on art installations we're working on with my wife.

I really like to play my dedicated PICO-8 pi in the living room. It's just a raspberry pi with a 3d printed PICO-8 logo on it. Configured to boot straight into PICO-8. Love it.

I like to use SNES style controllers with a button configuration of (talking about the four action buttons on the right side of a snes controller):
XO
OX
(or the opposite)

to emulate the keyboard's configuration of: oxox = zxcv.

Lets me just move my thumb to swap o with x depending on the feel of the game. 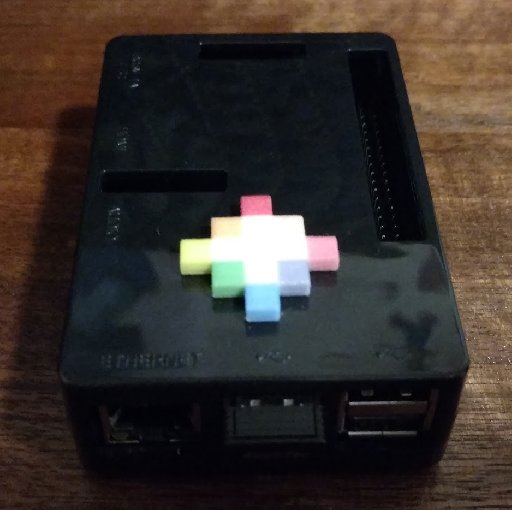