Hey! Here's my first cart. The code is ugly and cryptic as all heck. Enjoy!

Hey scgrn, this is great! I was able to make it past the first dungeon, and died in the second on my first playthrough. Nice work!

This is absolutely awesome. I've died a bunch of time and haven't reached the boss yet but I will. Oh I will.
The rotations are actually fairly smooth and the fat pixels look suits the game really well! Great job!!!

Thanks! I'm really glad you like it. Have you found any save points yet?

@TRASEVOL_DOG The gameplay runs in 128x64 mode, but the renderer blits two adjacent pixels at a time, so the world rendering is effectively 64x64. It just made me realize that this engine would be good for #lowresjam.

Awesome!! Make something for #lowrezjam then maybe? It'd be so cool!! :D

Hi. I don't know what to do. How can I get of the first island?

@car4000 Not sure what you mean. The entire game takes place on one large island on which you'll find three dungeon entrances, explore! Or...

The procedural map generation will occasionally create tiny, isolated islands off the main island. The player is always started at the most southeastern walkable point of the map, so it's possible that you could be spawned on one of these small islands and be unable to get off it.

I've generated a new game approximately three billion times during development and testing, and I've run into this problem exactly once. I wanted to write some code guard against this case, but tokens. If you happen to run into this situation just reboot the cartridge. *shrug

Anyway, thanks for checking it out!

played through to the end. good work.

This game looks really cool so far, I haven't been able to finish it yet. Really nice graphics, good job!

Hi, I wanted to add this game to a couple of wikis and had some questions just to make sure I get things right:

*Do you have any proper names for things? Like the green crab-like creatures in the first dungeon and what appear to be (annoying!) black-robed magic users in the last two. And also what's the red stuff that raises your health meter back up when you kill the occasional creature?

*Are there two save points in the last dungeon? I thought there was, but couldn't find the second one, but then I didn't feel like starting over and going through the whole thing again.

*What's going on in the room with the statues? Is your character lighting torches to gain entrance? Are those some kind of trays of water or something?

This has been a unique experience for the Pico! I like the atmosphere to it, especially when the music ends right during the last few rooms, then changes once you get to the boss...

Thanks! I'm glad you enjoyed it.

No, I don't really have names for things. I thought of the green guy as some kind of monster or ghoul or something. The robed jerk is just a generic evil mage. I kind of thought of the red stuff as the enemy's life essence that could be absorbed.

The dungeons are procedurally generated so they'll have a different layout every time a new game is started, but yes they should always be generated with two save points.

I have no idea what the statues are about. That's completely open to interpretation!

I was very pleased with how the last few rooms materialized. Fading the music out is a really simple trick to convey tons of atmosphere!

Pretty impressive gameplay-wise. The atmosphere is fantastic, and I love the little details, like waves crashing on a shoreline. Though, admittedly, the graphics are a bit lacking. Everything looks sort of... messy.

Good game though, looking forward to whatever you do next. 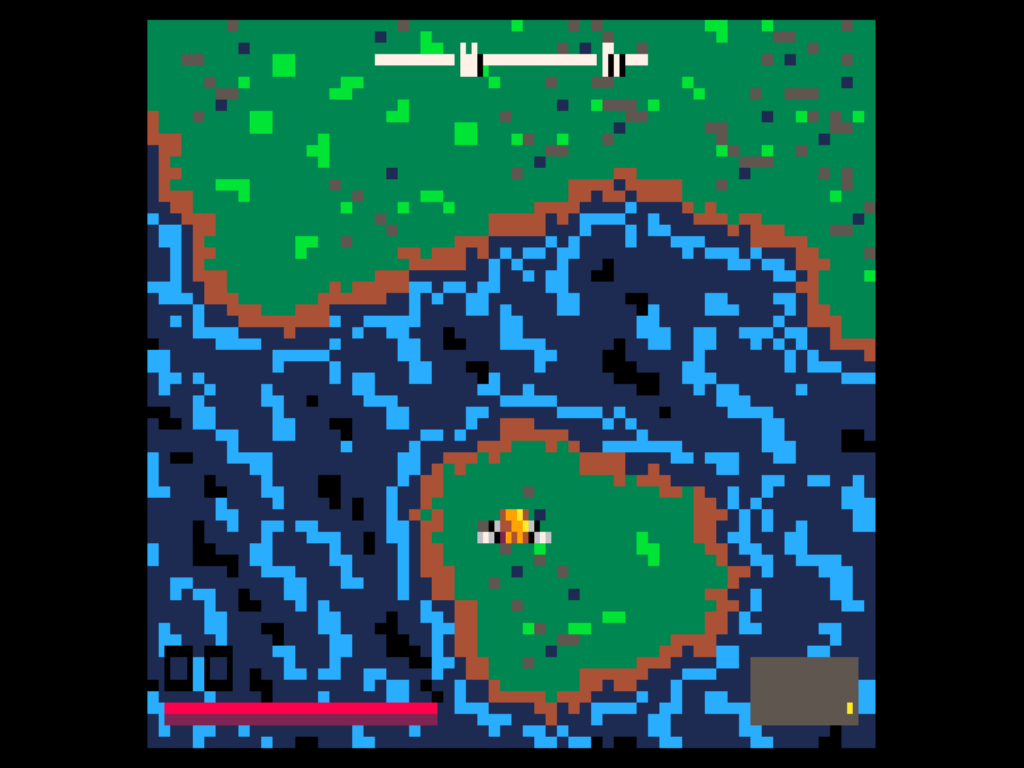 Scgrn, thanks for the quick reply and info!

Funny that you don't know exactly what the deal is with the statues :) It's cool to hear about though with this stuff, behind the scenes-wise.

Just edit to change anything you feel needs fixed or state it here and I'll go do it.

You're welcome, and here's another!: I also enjoyed the music and sound effects.

What a fun game! I expected it to be a Gauntlet clone, but was pleased to find that it's more innovative than that.

Great game! I'm going to be coming back to this one again and again.

Yeah, no kidding! My thoughts too, exactly, plus I think the size of the thing also did the trick :)

I posted a small update that fixed a bug that didn't surface until a bug in Pico-8 itself was fixed in 0.1.8. Namely, per the manual changelog:

I was writing outside the bounds of the map and corrupting the first row of the third page of the sprite sheet. The bug would only appear at save points and in the statue room. It took a long time for me to even notice the bug and it was a tough one to figure out! It felt really good to squash this one.

First of all, thank you!

Hmmm, that's odd. I'm not able to reproduce it. The game save is stored in cartdata rather than RAM, so if you've found a save point you should be able to continue from there. Just reboot your Pico-8 or refresh the page or rip the cartridge out and blow in it.

I did my best to balance the game and make it challenging but not completely unforgiving. I wanted it to be 'NES hard' but fair. Difficulty levels was a feature that I really wanted but had to cut because of token limit. I would only need one variable for the drop rate, but there's the overhead of creating a menu for difficulty select, along with keeping track of it in saved games. You could also download the cart and edit line 1451 :)

That is a good game you got there , I liked the rotation a lot ,I wasn't able to find the first dungon so I went for the scenod dungon and got wrceked.