I seem to recall prior art in this regard... 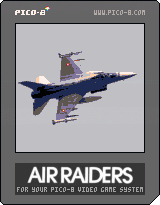 Anyway, this is definitely very cool, even if a little "wrong"