Picoball is a deck-building game.
Manage your own football club and lead it to victory in an 17 round competition.
Your progress will be saved automatically after each round. 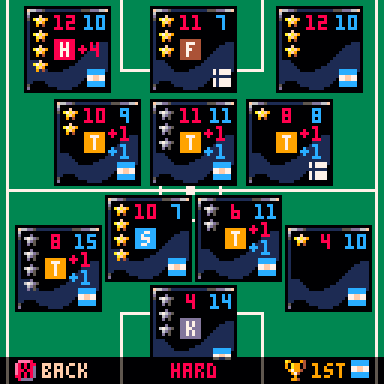 I like this game a lot, but damn if it isn't difficult. At first I thought the problem was that I did a run as Manchester. But even starting as Seoul, opponents seem to have top tier defense and attack and just go up from there.

This really is a fun, very-well-put-together game. It's quite hard, but not so hard I don't feel I can't 'git gud'.

In a modern game, I might suggest to you that you have it do a little more hand-holding. For instance, if you can detect that the player just did something incredibly ill-advised, you could tell them and suggest what they might have done instead, or roll it back and let them try again.

However, this is not a modern game. Games of the era PICO-8 emulates don't hold your hand, not even as much as you already do with your existing tutorial screens, which are well done. So... I'm mentioning it, in case it interests you, but I'm not really suggesting it. I think the game works as-is.

Anyway, great work. I salute your efforts. :) I especially like your intuitive, attractive UI. Also, nice work on making recognizable flags with so few pixels! :)

OH! I almost forgot. I did have a real suggestion. If you have room and you're willing, it might be nice to use the mouse as an alternate input method.

Not at all necessary, though; it'd just be cool. :)

Oh wow. Am I right that the game picks up where I left off last time?

thanks for the suggestions! you are right, it automatically saves your progress after each round, and in the menu you can restart.

Also I made easy mode a bit easier just now ;)

@enargy: Manchester is the hardest mode, I recommend starting with an 'EASY' team

I normally don't have any interest in soccer/football, but this game is fun! Love the interface and "card game" feel. The tutorials, continuing state, and visuals all make it even slicker, but the basic game seems well balanced (and tough!) and is pretty addictive.

Only thing I wish it had was some sound. Doesn't need to be anything fancy, but just something to go with card selection or goals and any other major events would be nice. The silence is deafening. ;-)

This is brilliant. Really.

I have a feature to propose about the players arrangement screen, that is useless now. Changing the layout (3-3-4, 3-2-5,...) can be used to affect the cards distribution during the match. e.g.: more change to get more defender early-game and more attacker end-game.
What do you think?

Also, be able to change one players at half time, can allow to adapte against the opponent deck.

Keep up the good work. This game is already my favourite of all pico-8 games.

@mise: I noticed on my second play that Manchester was hard mode. What I meant is that after I tried again playing as Seoul, it didn't feel like the difficulty had changed at all.

I don't have many tokens left, but suggestions are still very welcome. Unfortunately had to drop the neural network AI, because of the storage limit, but that mind still come back.

That would make it easier to adjust the AI power.

What's your main limiting factor at the moment? Tokens or source size?

And how much do you need back?

Whittling away stuff like tokens, effectively turning a lot of very small wins into a useful victory, is something I tend to be good at.

I glanced over your code, which is already pretty optimally structured, but I did see a few things I could make suggestions on. The thing is, I don't want to waste either of our time if you need far more space than I could possibly find. I don't imagine there's more than a hundred or so tokens to be recovered, barring some kind of major restructuring I haven't even considered.

I won't go down the rabbit hole too much here, and I don't see a way to PM, but I would need about 300 tokens maybe, and I already stretched it quite a bit :) It can be done, but first I'll see if more important thing come up.

Yeah, I think that's more than I could find. I'll take another look at some point and see if there's anything pervasive that you could change, but I think you've already done most of what can be done.

The only thing that really stood out was your help text, which exists as a lot of lists of lists of entries. With one token per entry and one token overhead per list, that would definitely add up. Writing a function to split a single "all text" string into those lists at runtime might result in fewer tokens overall. Maybe a very simple/limited json-like parser. If you assume you control the input string and can be sure it's valid, you can write a very simple parser with little or no error-checking. Could be useful in more than just this app, too.

Anyway, I think it might just be one of those times that PICO-8 is simply saying to you, "You are trying to write an epic poem as a haiku; please stop hurting yourself." :) 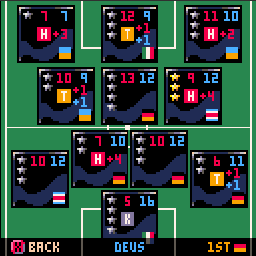 Very entertaining little game! Doesn't feel a lot like football, but it does feel good to play :)

Unlike others, I didn't find it too hard on the tougher difficulties - in fact, I haven't found much difference between playing Barcelona and Munchen.

I like the team building, and you definitely get a lot of mileage from the simple mechanics! The special skills hit the right spot - they are simple, but matter a lot and give a lot of individuality to the otherwise self-same players. I especially like the keepers and the "header" skill, which might be evident from the screenshot ;). I'd probably try to add (at least randomly generated) names to them to give them more personality, but that's a nit-pick.

The team-building draft is very addictive, nice choice of a mechanic. The matches do get a little repetitive, but that "will I get a new awesome player?" vibe is enough to keep one playing.

I feel that some of the skills are a little unbalanced - teamwork seems quite a bit weaker than the rest, and "lucky" gives similar-sized bonuses to "header", while being a lot harder to trigger. I know I'm the guy writing about depth being paramount, but the skill selection could also use a little more breadth. I think there is still a lot of space to mine here that would be cheap token-wise and would let you underline team synergy even more - e.g. a "playmaker" skill that adds bonuses to the next player's attack if you keep the ball. Broadening the skill selection would do a lot for replayability, in my opinion.

Had fun playing - keep up the good work!

@krajzeg
To be fair to us whiners early adopters, we played a harder version. :)

I need to give it another run, now that it's tweaked. I hate to admit my strategies are so poor, but on the old difficulty, I really struggled to prevail even on the easiest tier. I'd kind of hope that's more of the middle tier now.

(I figure if a game is really hard for me on "normal", and impossible on difficult, that's probably about right, because I suck at actually playing games.)

By the way, a sort of workaround for giving names in limited space/tokens would be just to give them initials instead. Like, J.L., B.N., etc. That might even let them fit on the cards.

It's pretty easy just to pick two letters at random from a string. Maybe take worrisome letters like "F" out of the string so you don't end up with "F.U." or something. Or, heck, leave them in for laughs. No reason not to pick the low-hanging fruit. ;)

I'm amazed that you beat the game with only one rare player, you must have executed extremely well. With three sets of Teamwork and 4 Headers going on that was a bit of maneuvering I can imagine.

And you're right, there is a lot of specialty space to explore still. We stuck with only self buffing players for the first version, for complexity reasons, but there's definitely new ideas.

Thanks for posting, you showed me a strat I've never tried :)

I love this game! :) This is the kind of wizardry I truly envy and that makes me love the whole pico-8 community. Great job!

Definitely one of the best games I've ever played on PICO-8!
Loved the wide variety of special conditions for footballers. You could add some sound/music!

I am loving this.
Question: How to bring up the tutorial again?

>I am loving this.
>Question: How to bring up the tutorial again?

Glad you like it!
You can open an Incognito tab, that should do it.

I have this downloaded and i was curious is there a way to reset the progress without resorting to going into the host OS file system and deleting save data? I want to start again rather than play with the handicap since I went through the first 5 teams without fully understanding the mechanics and how to realy play the game. Now that I understand the rules, I want to restart the season but even in the pause menu there seems to be no way to reset the season in progress.

Thanks, though, the game is pretty nice. Gave me some vibes of SNK vs Capcom Card Fighter's Clash in terms of being simple but moderately deep and definitely addictive.

If I understand you correctly, you just want to start a new run. You can do so in the menu (start). Enjoy!