The Remains of El Dorado is a roguelike game for PICO-8. You're seeking The Amulet of the Sun which will bring you great fame and fortune... if you survive.

Press C to charge a shot, press a direction while charged to shoot. Press X to enter the potion menu. Select a potion by pressing left and right, and press C to confirm. Aim your throw with the direction keys, and press C to throw the potion. Careful! Potions will explode on contact with a wall.

Remains is turn based. When you're in a tough situation don't forget to slow down and think about all of your options. Don't die with a potion in your pocket!

Potions are thrown around like grenades! On impact they will affect everything standing in the square they hit plus the 8 squares surrounding it.

Three types of enemies inhabit the dungeon and will defend their turf.

I like the cultist teleport power making you get into the thick of things.

Generation glitch? I spent a while looking for the secret passage. Very good game although the balance isn't as tight-feeling as 868-HACK. 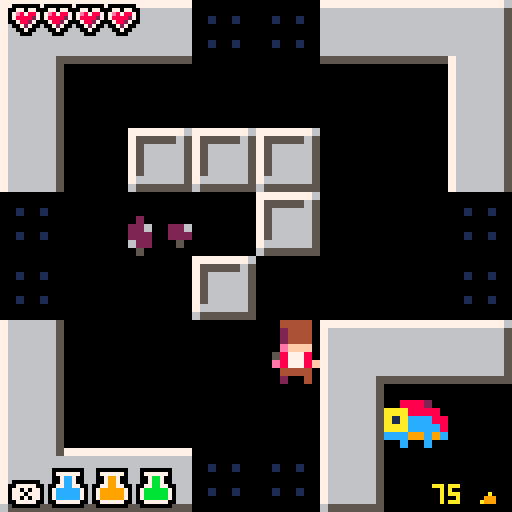 Happy to see you've finished this; I hope you're happy with the result, because I certainly am. :)
The new environments add a new feel to the game, too.

EDIT: After playing around with it a little more, I noticed that charging a shot uses a turn... whilst canceling one, does not. This creates the effect of being able to easily wait a single turn, which is pretty much the most OP thing possible in a turn-based game. :P
I'm not sure if this easiness was your intention or not, but personally I would suggest either making canceling a shot use a turn, or perhaps adding a hard mode which removes the ability to cancel.

In the long run though, it's your game obviously, so do what you think is best. :)

Hey thanks for playing! I tested the game quite a bit without allowing you to cancel moves and ended up deciding that while it was a better challenge it made the game less fun. It's not perfect but I'm definitely happy with it!

@TheTomster is meant to be both realtime (like the fire coming at you from the fire ants) and turn based (nearly everything else, except maybe the cultists attacks sometimes) ?

It's all turn based. Even the fire will only spread and deal damage when you make a move. You can always stop and think about your next move!

Beat it! That was really quite fun. You really captured the rogue-like experience for me - learning how to play, complaining about cheapness, figuring out the little details, and then feeling very satisfied.

I agree with Jeremy that canceling a shot feels a little over-powered. What if you could cancel a shot only by using a potion? This gives potions a secondary function as a get-out-of-a-jam move, but also means you will run through them faster. I kind of like the cancel-move when I am in a tight spot, but it is sometimes tempting to just sit at the entrance to a room and cancel until I can frag the ants one-by-one. By costing you a potion, you can still keep this technique for tight-spots but discourage rampant abuse.

Completed it after 4 tries