I am interested in purchasing the Next Thing's PocketCHIP which says it comes with PICO-8.

What I'd like to know is - does the PocketCHIP's PICO-8 come with access to DRM-free downloads for Windows, Linux and OSX, along with all future updates ?

To show some of my own 8x8 pixel work (which I've actually done now for several years), here is a sample. 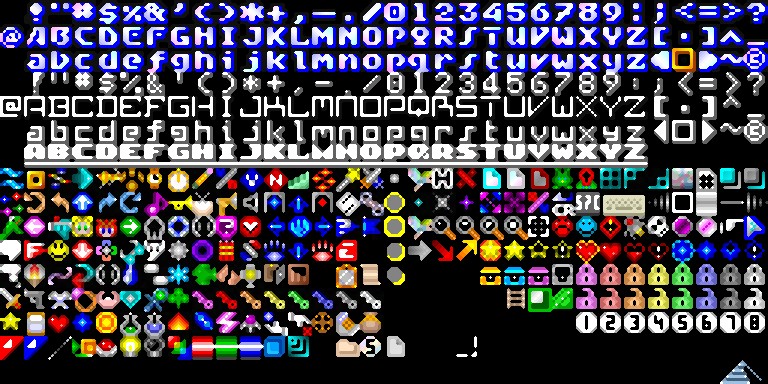 From what i understand, PocketCHIP owners do not get a license to PICO-8's desktop version.

Yeah, thanks, that's what I needed to know. I'll get both.

If I may make a few suggestions on the OS as I have seen it so far.

I'm a bit of an old-timer myself and not terribly fond of using the mouse except for hidden picture games.

Running ANY project, the user has the ability of designing a 256x256 splash picture for their game. A forced menu appears at either the top, middle, or bottom, programmer choice:

If Author's Website is chosen, provided Internet ability is available, Pico will quite simply inject a user-defined URL into the default browser.

If Credits are chosen, while the author has the ability of putting their name in a field that scrolls, ANY libraries they used during development would ALSO show that person's name - no choice. This would ensure giving credit where credit is due. Clicking on a field during credits would go to a user's website of choice (Inject URL to default browser).

Also, this splash and credit page will only appear in final run-time, so as not to hinder the programmer from debugging by having to press "Z" or ENTER every time they run.

I know this is considered cheating but consider the advantages of it. Not only will it force game developers to create CHALLENGING games but let the players explore a game to its full content.

The advantage is the ability to build complex tables read from massive data statements that can be accessed as easily as a database or spreadsheet.

KUDOS on pressing "P" to pause the system.

It would also allow me to write applications on the go for the projected PocketCHIP without having to be forced to use 3 buttons to enter in values or names for any small business-applications I might design in Pico for myself.

** I have noticed that in playing some carts online they slow down and speed up at times. I am going to guess that the main server which is running ALL the games for everyone is getting stacked with work, is that what is happening here ?

That's all I can think of for now.

I'm pretty sure that games run locally on your browser and not from any server.

There are a lot of keyboard shortcuts for the editing tools, so I don't think you do need the mouse. You should take a look in the manual for more info. Alt-Left and Alt-Right move you between tool modes, for example.

I wouldn't expect zep to follow most of your recommendations because the limitations on the PICO are chosen very intentionally to encourage development in a certain way.

The variable editor would be kind of useful.

Saving of game data is handled on a per game basis. A game can choose to save, either to the cartridge itself, or to the user's PICO8.

Its so simple to upload a cartridge that sharing code with others isn't difficult. Including other peoples code is an organisational challenge, but it forces you to think about whether you really need this piece of code or not.

Hmm ... Well, if nothing else, priority with me would be.

INPUT A$
PRINT A$

If this is impossible on the hardware, have an overlay appear that uses the arrow keys and (A) (B) to enter text.

Hopefully ZEP will consider the first one as it might well be the easiest.

Mimick, I saw that yesterday. I like your program. It would certainly be a good addition to be a permanent part of PICO's ability to input text.

Minju, I still want to be able to use a real QWERTY keyboard myself especially if the hardware has it, like PocketCHIP does. Perhaps have an option of either.

Some of what you've asked about sounds like a (non-existant) "desktop edition" of pico-8.

Hi Tyrone. I'm looking but not seeing IMMEDIATE ways of getting right into LOVE nor seeing immediate online games you can play in it.

Having explored most of this site (Lexaloffle - Pica), I am certain PICA is the way to go and support.

And as for it being a desktop, no. The PocketCHIP has a real keyboard so PICA could be used in that.

Additionally PICA could also use the native resolution of the PocketCHIP if it were added in options so you yield 480x272 instead of just 128x128.

And minju, these are just suggestions. Purists can still use the limitations if they so choose - however always have an option to change configuration to take full advantage of the hardware medium used, especially if it is a portable one like PocketCHIP.

Now if someone did go crazy in it and say build a game in it with a resolution of 1920x1080 or something, naturally it would only work on specific hardware then.

I like the concept of the small screen, but would also like to get an option for at least a wide 4x3 in there somewhere, say anything custom so you could even make a 32x32 pixel game or one that is 800x600 for PC or 480x272 for the PCHIP.

That last resolution of 480x272 would still run on all platforms, including the PSP 1000 which has the same resolution as PCHIP.

There's a function in it called "Splore," it'll take you to a little GUI that lets you choose between recent uploads, popular uploads, personal favorites, downloaded/saved local "carts," etc.

Once you have one of those loaded up - and some are indeed, simple engines or repositories - all of it's code is loaded into PICO's internal editor; so you can simply press Escape to go to the code editor, and copy whatever it is you need right to your clipboard.

And yes, of course, this lets you play other people's games, of course!! You can also save a copy locally once you have it loaded in source, just type "SAVE %filename%" - you don't even need the extensions, really.

It does show the title, forum account page (which shows you all that the person's made as well), kind of like you describe there; but it also lets you "star up" (like) a game, as well as add it to a list of personalized favorites; so you can get back to it easier. It's all integrated with the forums here, as well! So if you star/favorite a game on the site, it'll reflect this in Splore, and vice versa.

All of the games, while not EXEs, can be run in most Web Browsers. It's because, while LUA coded, they're essentially PNG images using LUA scripts in a kind of creative recursion, and web browsers interpret that data, whereas ordinary image editing programs do not. You can also edit code via text editors, once you've saved one as well; but be aware that it doesn't give you token counts.

Variable editor: This just takes place in the code editor, under the _INIT() function, really. It's usually one of the first things you make, honestly; to set up your variables, arrays, etc. I can see how recoloring variables could be a thing, and maybe having a keystroke you can use that looks up the current variable names to ensure consistency would be good, though.

I know for sure there IS a command that allows you to remap gameplay keys; because I've already used it. Being a bit of a touch typist/arcade player, I basically set mine up to ESDF (directions), JK (OX), shift and space (select and start).

I want to say it's CONFIGKEY or something along those lines, but I really only used it the once. CONFIGPAD (or the equivalent, replacing KEY with PAD) lets you add controller mappings as well, in case you have a USB gamepad. Which from what I hear, is pretty essential to playing games with a PocketCHIP.

A lot of the preselected colors in PICO do tend to have two shades - there's three blues/grays, and the only iffy stuff is Red/Pink/Orange/Yellow; but I can tell from your work above, you're creative enough to make that work. I think there is a way to edit the preselected colors to a scheme of your choice; but so far I don't think it does interlacing internally (I could be wrong!). But judging from your fine work above? You'll manage just fine, either way.

Finally, I don't know if you're into this sort of thing, but the downloadable license does contain versions for Windows, Mac, Linux, and Raspberry Pi. It's a little more work to get a Pi set up, but if you're inclined to, you can craft a portable system using one of those, and it will be covered within THAT particular license. Personally, I'm going for a CHIP for on-the-go code/art stuff (I work too much otherwise, projects moving like a snail in a super glue race); and then a Picade setup for playing (since I can connect to the internet over my phone, with Plus/3's internal WiFi).

Also the ability to not just play a game but to look at it glean its wisdom from the source - and also on the go.

I'm also understanding PCHIP can do many other things, including emulation.

I have a mega-hacked PSP 1000 at this time that runs all emulators from PSP all the way down to Atari 2600 and I experiment playing those games constantly.

I developed a complete RPG Maker about 15-years ago for Windows XP (Not Windows 7, Vista, or 8 compatible, however). Some of the 8x8 tiles you are seeing are the direct results of a programming language I developed using icons solely as the language. I dubbed it, "The Sprite Messenger."

I called the game maker that uses it, "Scenario RPGMaker 2"

Since then I have been dabbling working, drawing, and sketching out ideas for a game maker of my own in BlitzMAX.

It seems someone has done a branch of this before me (Pico-8) and I'm good with that.

I just know some of the features I wanted in it - and hopefully if nothing else INPUT will be added so true QWERTY strings and numbers can be put in like any normal BASIC language.

Would be great to code some text-based adventures where you can type out "Climb Tree" and "Go North."

Load State and Save State is something I have always seen in emulators and thought it would be awesome to have in a game building language. Not just for deep level debugging for the programmer but for players to get the chance to fully explore a game a written game to its conclusion.

I understand the 'nostalgia' in building this language to work with small parameters, but I don't know if ZEP realizes how neatly he has cornered the idea on miniature game-making, and by that I mean using pixeled graphics, which I've always been a part of.

If it won't be Pico-8, perhaps it will be Pico-16 with everything Pico has except unlimited color and size for pixels, and unlimited tile, mapping, sound, music, and code for space.

Yet still keep a friendly editor for 8x8 pixels, of which I have drawn many many tiles.

One game I would like to write in PICA would be rogue-based. Not only to get my feet wet in the language but provide a great game for others to play.

Thanks for the welcome ! :)