The original ROM is hard to come across on the web nowadays. They started mysteriously self-destructing sometime around 2003, and the ones that are still intact seem to have a lot of data missing... Forgive me if this replica isn't exactly how you remember it, I don't have a good reference for most of this.

Alpha 12
I'm in the middle of an engine rewrite to simplify things and compact the data and stuff.

Noticed some issues in the music, that'll fixed for the next version but I'm in the middle of major sprite compacting that requires lots of code rewrites right now...

was running right, pressed z and got this: 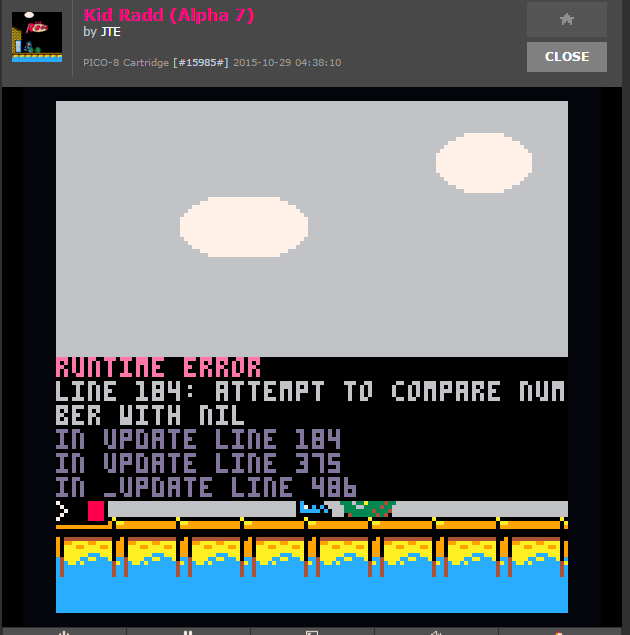 Starting to think I should be writing blog posts about developing this instead of having put it in the WIP section...

im so glad someone else remembers kid radd :3

I'm getting distracted and making a lot of other little things on the side, but if I could bring Kid Radd to the Pico-8, it would truly be my magnum opus.

Kid Radd was almost definitely a real game for a real console in the real world and not at all a collective fever dream we had 10 years ago of which remains little to no proof that it ever even existed in the first place. I'm almost 27% certain!

The dream isn't dead, but it's actually really ambitious to try and cram all of this in here without cutting corners... Kid Radd is just full of so many giant sprites and animations and music... The music..! I barely even have enough sfx slots left over for the basics.

Will have to look into compressing and swapping the soundtrack out like sprite banks so that more general sfx can have the legroom they need.

And the gameplay itself is only fractionally there, with no object to object collisions still... Still so much to do! When I run out of code space it'll all be over, I probably won't even have enough room to implement the final boss even if it's the only boss in the game.

Too bad about the space limitations. Have you considered using multiple carts? The original game made good use of bank switching if I remember correctly.

(I really want to see an RPG level now)

I would, but then it wouldn't work on the BBS. It seems like that would be better to use that for development purposes, eg. load uncompressed sprite banks from other carts to begin with but compress everything and replace the loader with decompression later.

Is this related tot he NES game Totally Rad? I loved that game when I was younger. I remember being in Toys R Us and pleading with my parents to get it for me (which they did not, I got it months later from a relative as a christmas present). Fun game, hard though, never made it past level 3 or 4.

Anyway, sorry for the potentially off topic comment. Your game looks great! Good music too!

Good eye! It's sort of an alternate-universe mix-spoof of both Totally Rad and Kid Kool (hence the title.) It turns out this is a lot more apparent with Pico-8's limited palette making it appear similar to nes colors rather than the səu originals.

Or it's supposed to be like that, anyway. I personally only know anything about the former, and only recently learned how "MegaMan" games are supposed to work, so the physics miiight be a bit off. ^^;;

If you'd like to know more, you can read about it on a backup mirror webpage here.
https://www.bgreco.net/kidradd/index.htm

Updated to "Alpha 18" today. I am pleased to announce that the game is finally in a "playable" state, although it's not particularly "good".

I believe this is the last version I'll call "alpha", because the next thing to do is implement ninjas and maybe the apple projectile, then it's ready for "beta", where I start working on detailed level layouts.

Edit: aaand then I release a giant bugfixes patch the same day. heh.

How are things coming along?