Still a lot of work to do, the collisions seem a bit weird, the ball sometimes feels sticky when bouncing around.

I like the graphics a lot :P A few issues though (only trying to be helpful, not trying to crap on your game):

Thanks a lot for the comments! You're absolutely right about all of them, I was eager to release the cartridge early to see how all this work. I am vividly aware of all the problems with the game :)

I already made some enhancements (multi-levels, better collision with blocks, etc)

I didn't remember the sticky ball at the start, but that would be a really good thing to add of course (and the lasers!)

Not really the same, but it reminded me of http://www.jsbreakouts.org where people build the same breakout in different game frameworks to show how they work.

Thanks matt, that's great! This is exactly the kind of example I was looking for.

Thanks! I've already squeezed some really good times out of this one. Very well done, overall. The only super minor bug I encountered was, in very few instances, the ball would get caught sort of between the bouncer(?) and the bottom and burn up a bunch of lives quickly. I saw somethings similar in the pong game on here.

Oh crap, almost forgot to give mad lovin' on the font work! looks very correct and very nice. Thanks again, you massively improved my Thursday night.

So much tunneling. I think your ball is moving a little too far inside of other objects each frame, you can fix this in a couple different ways:

A. edit collision code to move the ball to the outer edge of the object it's colliding with, as well as making it bounce

B. Make the ball half as fast and do it's movement calculation twice per frame, so it won't go through stuff so far.

Yeah, great advice. I'm rewriting the whole game code from scratch to use the native map for levels. This will make collision checks a lot easier (i also stole a lot from the Wall Collision Example cartridge).

And as an added bonus, the 16 game levels will be easily customizable! 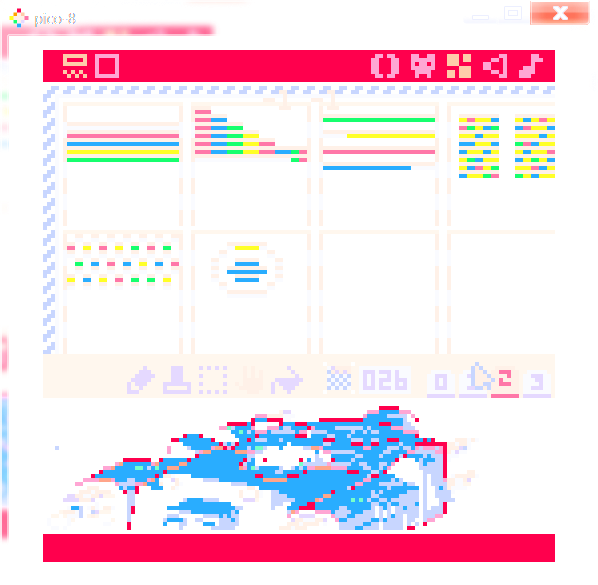 The new graphics look epic! I still saw a couple issues where the ball would bounce the wrong direction and I swear it went through my paddle once... But you're doing good stuff here. :L

when it starts if you press left hold and then fire, it goes back thru the paddle and you lose a life.
it will do this every time.

Maybe you could add an extra screen at the end of the animation that says, START NOW or similar, i waited at the last piece of dialogue for ages incase there was more. :D

Oh my gosh, this is lovely. I love that Arkanoid is a simple enough game in terms of graphical assets that you can get away with spending spritesheet on that mothership, makes the nostalgia trip all that more powerful.

Also funny to me how much square tiles feel weird. I guess the wide bricks of Breakout-type games really were a pervasive standard.

Another simple approach for collision, which is potentially too expensive if you're doing a lot every frame but for just a few specific objects isn't too bad: literally move the ball by one pixel and then check, and repeat, all along it's per-frame movement vector, and when you do get a collision, jump back to the previous position, alter movement vector accordingly (i.e. reverse vx or vy), do any collision-triggered events, and continue stepping forward again along the new vector looking for further collisions or for the exhaustion of the frame's worth of movement.