This is a PICO-8 game, which I made during Basic Shmup Showcase event organised by Lazy Devs Academy.

You can play it here and on https://beetrootpaul.itch.io/dart-07 .

⚠️ Please be aware this game is under development. Mission 1 is complete and ready to play, but you enter missions 2 and 3 on your own risk 😄

If you want to take a look at the codebase, please visit https://github.com/beetrootpaul/dart-07 (the code inside PICO-8 carts of this game is minified, therefore not suitable for reading).

Virtual controller (in browser, on a mobile device):

Physical game controllers are supposed to work as well, even in a browser. Button mapping varies between models.

Your task is to pilot Dart-07 unit in a set of secret missions of increasing difficulty:

Destroy enemies along the way to increase your score, grab power-ups left by them and survive a boss fight in order to complete a mission.

There are 5 types of power-ups you can grab, each of them either makes your life easier or, if cannot improve further, increases your score:

In your HUD you see: 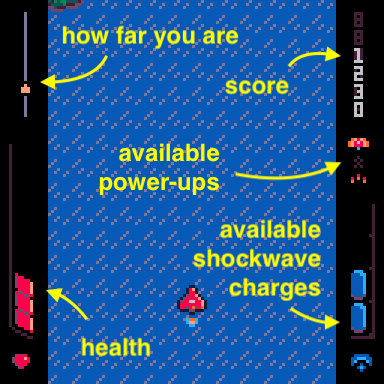 Technical Challenges Tackled In This Game

In this game I focused on learning various bits of PICO-8 API.

Some of the topics I tackled in this game are:

I implemented this game on my own, as well as drew all sprites and composed all SFXs and music. But there are some resources I found super useful and used some of them I used in the codebase as well. With huge thanks, here are those:

This game is incredibly good. Difficult but well made and polished.

I luv luv luv the UI. It's the best I've seen so far in the PICO SHMUP Jam. Even without the explanation image, it's extremely intuitive. The only thing I'd even try to suggest is some more screen shake or something to make the guns feel less like pellet-guns and more like cannons. Other than that I really like it.

I am happy to see you love the UI, since this is the area I put a lot of thought into 😄 And thanks for the feedback!