Arrows to move, Z to confirm, Enter for menu.

Don't crash into turtles and avoid starfish and sea urchins!

To score points, stay behind turtles for as long as you can, but don't forget to dodge them at the last moment!

The score multiplier decreases if you are too far away from the next turtle. Keep the multiplier high to score more points!

Are you fast enough to keep up?

You don't need to hold the arrow keys. Just tap the direction of the lane you want to switch to and you'll be moved there automatically.

If your fingers are fast enough, it is possible to stay in the space between lanes for a short while. That will help you avoid seemingly impossible obstacles:

You can often squeeze through very tight gaps. Take note of the size of the character's hitboxes: 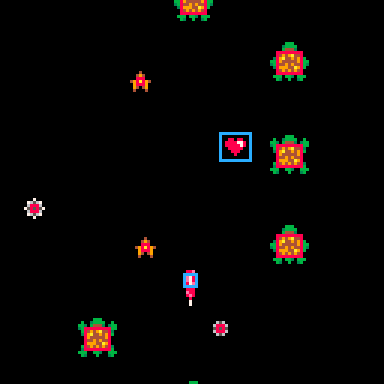 In the first stages of the game, a heart spawns whenever you get 1000 points. Don't forget to collect these extra lives, as their spawn rate decreases in the later stages.

I made this game by myself during July 2022. What inspired me was @Krystman Shmup tutorials on the Lazy Devs YouTube channel (https://www.youtube.com/c/LazyDevs), especially when he demonstrated how to create a parallax scrolling star field. You can see that I implemented that sort of thing with the bubbles in this game. I ended up not making a Shmup, though, but I think I'll try it out someday in the future.

The main song of the game is a rendition of Misirlou, a folk song from Eastern Mediterranean countries. I wanted it to sound more like Dick Dale's arrangement of it, which is quintessentially surf rock, but I don't think I've succeeded in capturing that impression. The song is still catchy, though, but some people may feel like it doesn't really fit a marine setting.

Thank you so much for playing! I made this game for the fun of it, but consider making a donation if you enjoyed this little toy I've put together for you: https://ko-fi.com/profpatonildo70266

This game is released under CC BY-NC-SA 4.0. Here's a link to a summary of the license: https://creativecommons.org/licenses/by-nc-sa/4.0/

Thanks! :D I had a lot of fun adding small details here and there to make the game more interesting and balanced.

I love it! Very well made, fun to play, good visuals, and great animations!

Thanks! I'm glad you enjoyed it! :D