OVERVIEW
This cart is a bit of a demo of a few shadow methods I've given some thought to. The first two techniques work best at 60fps, but the final technique I think is suitable at any speed.

UPDATE
The original cart had an issue where the "peek/poke merge" technique could not draw starting at odd numbered X coordinates. This has been fixed (but made things a bit more complicated)

1 ON/OFF SPRITE:
This method uses a solid shadow sprite that cycles between on/off every frame

2 ALTERNATE PATTERNED SPRITE:
This method uses two sprites with an alternating pattern that is cycled every frame

3 PEEK/POKE MERGE:
This is what I really wanted to get to :) This method uses a defined palette of darker colours. Each PICO-8 colour is given a darker alternative. For some, that is full black, but for 8 (red), it is given dark purple (2).

Mark as Spam
Freecell 1.13
by brent

Welcome to exciting world of Freecell! Oft overlooked for the also-bundled-with-Windows Solitaire, Freecell is the thinking man's card game. Reorganize your eight cascades from King to Ace by making use of your free cells and return them to foundations to clear the board.

As an aside, this is the first game I've written. I wanted to take on something relatively simple to get a handle on PICO-8 and learn a little bit about organizing a game. If you encounter any bugs, let me know. I'm on twitter too - @somebrent

The goal is to fill your four foundations with each suit starting with the Ace and ending with its King.

The board consists of

I took some time to rewrite things so that a more deliberate architecture was in place before moving forward with more changes. I wouldn't exactly call it "clean" at this point, but it's better. I'd happily listen to feedback on architecture once I've released it.

For now, a screenshot of my first finished game in Freecell for PICO-8. Lots to do still! I'd like to strike a balance that saves button presses without turning the game too much into "autopilot." As it stands right now, it requires far too much input though. 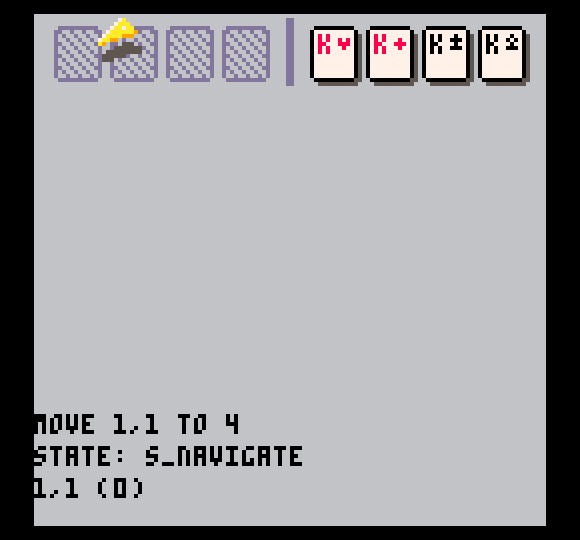 Had a little bit of time last night to add in moving cards around as well as selection animation. Anything can be moved anywhere right now, but with that out of the way I think it's time for logic next

Just got my PocketC.H.I.P. and figured it was time to dive in and give creating something a shot. Figured a card game would be within my skillset to create, so here it goes

Have the deck randomization, board dealing and cursor working so far. Cards can be moved (in code), but I think it's time to start working on a bit of the logic that makes Freecell well, Freecell.