And you have been summoned to kill it!

But first, you have to find it!

Welcome to this forsaken land...

There is a lot of ground to cover... 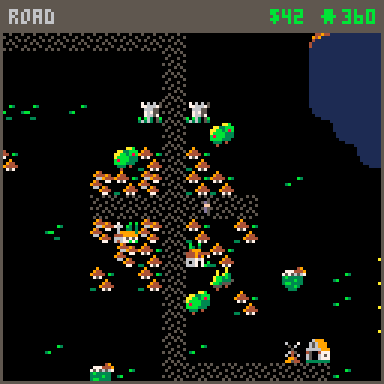 Every part of the map can be visited. Explore different locations, such as villages... 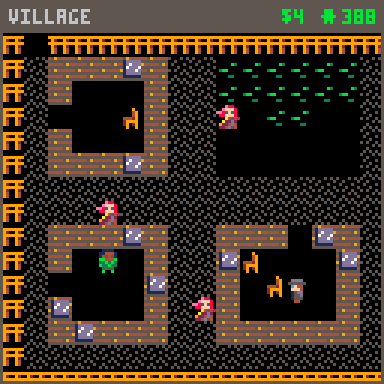 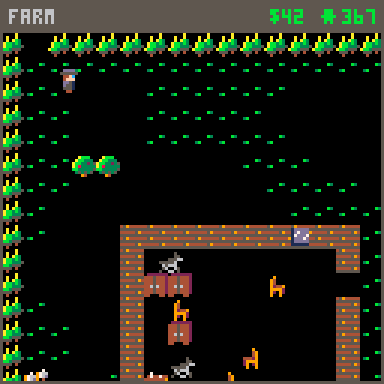 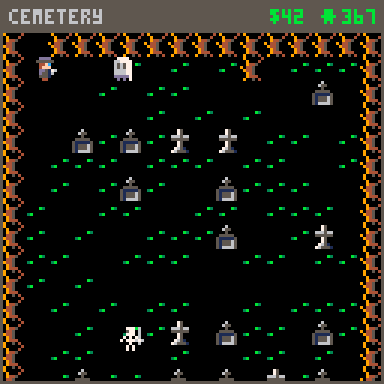 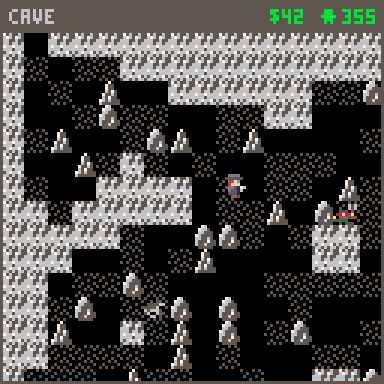 But beware! There are creatures everywhere! You have a pistol to defend yourself. It can be useful for simpler animals, such as snakes and wolves... but can it handle more dangerous creatures?

The monster is somewhere. No one knows exactly where... but maybe someone has a clue?

Perhaps it is hiding somewhere... in the deep secrets of this land...

Hurry! Time is against us!

You control the hunter. Depending on where you are, controls are different:

In the overworld, move with the arrows. Every tile except for roads and open areas can be entered by pressing X. Look at the top of the screen. A quick description of the location is shown there. You can move everywhere except for water and rocks. But try to stay in the road. The hunter moves faster in roads.

When inside some area, you can move with the arrows, and use X to shoot your weapon. Use Z to select a different weapon (if you have one). Keeping X pressed makes the hunter shoot continuously. But different weapons have different shooting rates, beware. You can walk (and shoot) diagonally too!

The game starts with you (the hunter) in the top left corner of the map, in the docks. The ship that brought you here can still be seen there.

There is one monster in the map, somewhere. But you can't see where it is. You can only find out its location by asking people in villages, farms and churches. Normally, people will tell you a general direction where it was last seen (if it has been seen). If the monster is really close, a villager will warn you to hurry. Go outside to the overworld and look for a question mark. It will pinpoint the monster's last known location. Be fast, though! If you take too long, it will move. If you enter the location where the monster is, you will have the opportunity to confront it!

But beware! You start with a simple pistol. You cannot defeat the monster with it! It is suicide! In fact, it is only effective with weaker creatures such as snakes and bats. For other creatures, you must acquire a better weapon. Look for a store. But you will need money... I am afraid you will have to use your hunting skills to earn some cash! Each time you kill a creature you earn some money. Of course, weaker creatures drop less cash. To get the best weapons you will need to kill strong creatures. Psst: I heard dwarves living in keeps and caves have a lot of money...

The monster will not stay still, waiting for you. No! It is constantly moving. And every time it enters a village, it kills everyone in it! Look for the top right number in the screen. This shows the number of people still alive. If the population reaches zero... well... let's hope you can defeat the monster before that, right?

While hunting, try not to be injured by creatures. If you let some creature touch you, you will be injured! You will not die immediately, though, but you will need some time to heal. Try not to lose your mind to madness while the monster rapidly decimates the population during this time!

These are the basic rules! Investigate! Hunt! Earn cash! Buy a weapon that you feel strong enough to kill the monster! And track it down! If you are lucky enough to hurt him, it will try to escape! Do not let it escape! Kill it immediately, otherwise... it will hide! It will heal! And it will come back for you... stronger as before!

Oh, one last thing... every playthrough is different. The overworld is the same, but each individual location is different. Different enemies, different people... and a different monster every time! Some are more difficult than others. Can you discover all monsters? Can you defeat them all? Keep playing until you have mastered the game!

Thank you for being interested in my little game. This is my first game in PICO-8. I am not a professional game developer, but I loved playing with PICO-8 and its limitations! And I have to tell you... I had a really hard time squeezing everything into a single cartridge!

This is what I implemented:

I think this is a good overview of the challenges. Please, take a look at my code. If you have any ideas about how to reduce it, I appreciate it! There was a lot of cut content because of the code and sprite limitations:

But of course, I couldn't do all of this. Perhaps when Picotron is out I might be able to do it!

Finally, I think this game is HARD! I like it, though (I am an old-time gamer!)! But new players might find it too hard! Sorry about that!

My name is Daniel Lucrédio, I am a hobbyst game developer, and a teacher. You can find more about me in my website: dlucredio.com (it's in portuguese, sorry about that). But you can e-mail me (find the email at the bottom of the site).

Cool little game. I keep getting wounded and losing all the people long before I have a good weapon, so I don't think I'm ever going to finish it. But it's a fun and engaging idea.

Very impressive!! I found a bug though: when entering one of the farms, I spawned inside some other object and couldn't move, neither could the enemies reach me.

Thanks for the feedback! It is really hard, I still need to try and balance things a little better. And thanks for the bug report profpatonildo, I will look into it!

Fine but there are few rewards, @dlucredio. Conversation is random. It appears as if there is no "quest" something to spurn the player onward.

@dw817 yes you are correct! I had quests planned, and items to fetch in specific areas of the map! Specific monsters would require special magic items, and you had to figure out what kind of monster you are dealing with, before trying to attack it, fully prepared! But I ran out of memory code! I just don't know how to squeeze more logic into the game. As I mentioned, this is my first game!

Phew, after some tries, I found best place to farm gold, bought shotgun and tracked the monster.
I'm surprised the monster has one last trick in its hides before I could finish it for good!