I'm pretty sure somebody already tried this, but I didn't want to spoil the fun for myself by seeing somebody else's great work before having my own go at it.

I replayed some Fallout in the last weeks(that I spent without the internet(damn you, internet providers)) and fell in love with their take on the retro-styled terminal.
I also thought it would be a nice exercise to get comfortable with string manipulation. And then I had to stop myself before it got too messy.
This is really just a small demo thing showcasing my take on the terminal with some lame jokes.
I wrote a neat function for comparing strings, if somebody needs one you may copy it. The rest of the code is a mess because I did it all in a day around work. 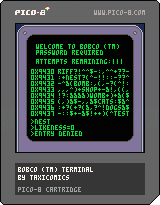 I split() two strings and then iterate through that new dictionary in a for loop. Each turn I check whether the two dictionaries have the same letter in the same place and, if they do, I add 1 to a score. In the end I return that score.

The part that is much more interesting is mixing the words and some other nonsensical special characters for that "hacky" look. There is a dictionary with random characters and a dictionary with the chosen words. The table you see in-game is itself another table consisting of 8 lines. Each of those lines gets filled character by character. There is a set gap between words that gets filled with nonsense. The chosen words dictionary gets chopped up again and sprinkled into the mix. Et voila! A "hacky" block of text.

I'm playing Fallout 4 right now for the first time. I've always loved the hacking and lockpicking in the Fallout games, so I'm happy to see this translated so nicely to PICO-8! I like that you put actual content behind the hacks too :). I don't know of any other versions of this in PICO-8 (though I've never looked) but I think yours is very nicely done!

@2bitchuck thank you very much for the kind words! And i hope you have a ton of fun on your playthrough :)

I ... personally seem to be figured into this cart, @taxicomics. o.O

@dw817
Hehe... Yes, thank you for your work and continued support of other peoples work! Thx for keeping this community alive.

You are very welcome, @taxicomics. If I see positive works I will support them.

And I am not the only one. There are some veterans in here who also do a good job of supporting others in their works and education - especially in producing demos and Youtube tutorials for Pico-8 - you know who you are.