32m very fun and makes me think with my peanut head

@loadandcode all levels are possible, i have tested them. Some may need knowledge of speed tech.

I got to the top section of 24m like 6 times but can't get over to the second section I always run into the down facing spikes if I up-right dash. Any tips to get passed that section?

@Raptite there isn't really a trick for that, you just need to dash later and hope you don't run into the spikes

@coolelectronics is there a way of doing the wj in red ? Or do you have to somehow keep your dash ? 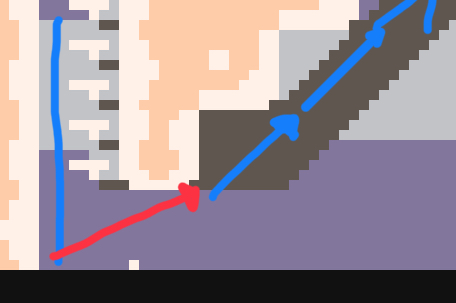 @Cadaeib65
no, you need to keep your dash

While neutral, jump dash, wall jump, fall through the spikes. Do some wall jumps, and stall where the balloon is until you have a dash and it has respawned. Dash up in the ballon to elevate with another dash ready and while holding left to place yourself correctly, and dash up as close as possible to the block while managing your height to end up just at the same height as the top of the block. Hold right when next to the block, get your dash back, and jump immediately left. Dash up to walljump one last time.

Start by hugging the left wall, then jump and dash horizontally right. Drop down, dash up on the frame you get the balloon, and wall jump off the spikes right to land back in the hole. You should be green. Jump out of the wall and wall jump off the spikes, then dash twice up left to reach the left part, where you can stall by just pressing jump. Land on the ice, drop down a step, and hug the left wall. Run right, and dash frame perfectly up right. Jump dash right very quickly, if you get back where you were, you can try again with a little later dash. If you get out, press jump twice without moving after the balloon to get you back to safety. You should be green again. Hold up right for the rest of the screen, press the jump key above the second spike, this should make you wall jump off a spike-covered corner, and now dash twice, the second being as close as possible to the final spikes.

Die if needed, and buffer an up-right dash (start holding the dash key while respawning). You only have about half a second in the spike to prepare, but hug the right wall, then hold left, jump a frame later and continue going left until you are two frames away from dying to the spikes. Now, dash up-right and jump as soon as you can to start wall sliding on the right. This whole movement has more than one frame for margin of error, but this combination works. Wait a tiny bit on the right wall, and hold left to wall slide down. At the bottom, wall jump, dash up-right and spam jump as fast as you can while holding right until you bounce off the right spikes where you can hold left to land safely. Jump left and aim for the left part of the ceiling to bonk your head on, placing you just above the spring. Bonk too much right and you will inconsistently land on the side of spring, jump too late and you will die to the spikes. Dash up 2 or 3 frames (I think) after bouncing, and hold left to get in the springs. Dash down-left 4 times in a row while waiting each time until you don’t move anymore, and you be in the first or second spring from the left, if not, dash one more time. Your next down-left dash will push you out, so prepare to dash straight down whenever you see yourself sliding on the ground. Jump up, and stay more than one tile away from the spike. Run right, and jump-dash-right when you are in between the first and second tiles (half a block away from the spike). Jump-dash-right once again as soon as you land. Then, do some walljumps until the end, and dash up-right to wj off of the spiked corner.

Hope this helps, ask if needed

I can not figure out how to keep my dash for the corner boosts on the jank level, please help

@NatNatNJG you need to do 2 clips

32M is possible. It need Frame perfect inputs and Pixel perfect positionings though

@NatNatNJG
kinda tricky, you have to cornerboost on that last bit of ceiling
you might need to have parity for the spike? i'm not sure, it's been a while since i made this cart

this is the hardest level i think, the next ones are slightly easier