As you know, a new palette method was discovered. Now while you can't use all 32-colors in one screen (which is what I had hoped), you CAN tweak individual palettes of the 16 to use the new set.

This means for those of you who want to make games that use only one HUE, then you might find this program useful.

It shows 6-squares going from darkest but not black to each color of purple, red, orange, yellow, green, and blue, using the (O) key to change between, and the coding involved to produce it.

I have since added a picture of Hopalong Cassidy. This was not easy. First I converted a square picture of him to 128x128 B&W. Then manually created a palette based on the 7-colors that comprise of (Gray). Then reissue the image using that palette.

Then manually modify the palette only to default PICO-8 standard. Import. Re-hue, done. He looks best in the GRAY hue because that is the picture he was originally, B&W.

Would be keen to have optional 16-shades of B&W. :D Maybe next PICO-8 release.

Note, the color bars and squares are still there, change value HOPALONG=0 in the program and re-run.

I haven't tried the "new" color palette yet, and I don't know much about how pico-8 renders things, but I assumed that you could just poke the address, draw something, then poke it again to revert back to the old color. Why cant all 32 colors be used at once? what does changing that address do exactly?

Can't use all 32-colors at once because each pixel is limited to 16-colors and two-pixels take one-byte of memory.

Changing that memory address flips to use original color set or new color set. And no, to my knowledge there is no way to set any of the 16-colors to a custom true custom RGB ($000000-$ffffff) rrggbb hue.

NOW if ZEP wants to really experiment, he COULD give us a tweaked and optional resolution of 64x128 where each single pixel is double-width in appearance and then we could have a true 256-colors possible without having to rearrange or use any more memory.

The palette would appear as so: 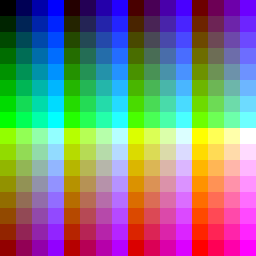 The Commodore Amiga used an interesting method to get more colors too. Called HAM meaning Hold-And-Modify.

In it, you could change RG, GB, or RB but not all three at the same time. So minimal it counted two-pixels to be able to go from black to white.

The Apple ][ computer used an interesting method to generate color as well.

You could plot 7-pixels across with a number from $00-$ff and you could have 6-colors too, counting BLACK and WHITE.

Without looking up the answer, do any of you Piconians out there think you can figure out how that was accomplished ? :)

Hi david, Again another modified post, this one less than modification than the last. but I saw a yeehaw man and added a yeehaw noise

Not sure what you're saying here, Scrub. Can you solve the Piconian problem above ?

Mark as Abuse
yehaw
by ScrubSandwich

Copy and paste the snippet below into your HTML.
Note: This cartridge's settings do not allow embedded playback. A [Play at lexaloffle] link will be included instead.
wait oops
P#67309 2019-09-05 23:12

It is the next day and no-one has solved the question ?

The answer is: TRICKY

Steve Wozniak made the Apple ][ computer years ago.

Color was a very real and desirable thing to have in computers back then, so he developed the video hardware to act as follows.

This does have the disadvantage of getting color when you don't want it (as seen above), for instance in developing and drawing a 7x8 pixeled font. The only way to remedy this would be to have your font minimal have 2-pixels across for either white or black. Here each character has a minimum of 2-pixels across to form the strokes of the letters.