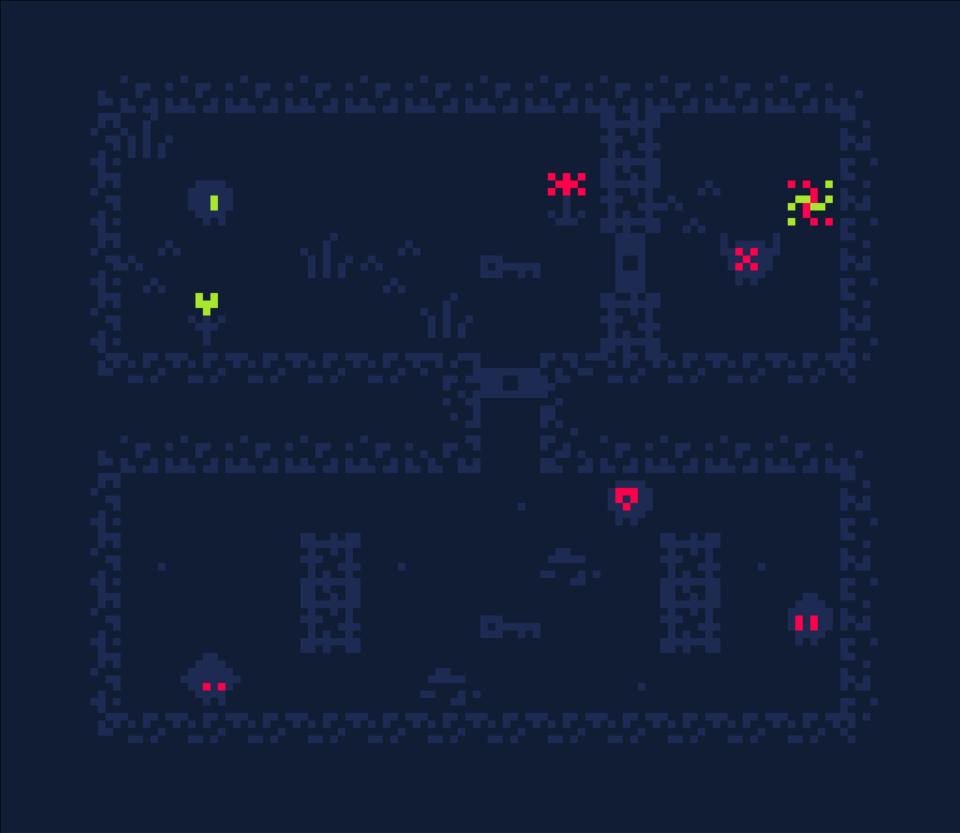 I'm not much of an artist, but here are the sprites for my jam submission (working title Ghostflame). I think I've decided to do a roguelike but I'm not 100% sure. However, I do know that I wanted to use the expanded palette for my sprites. I chose some colors that I really like but I'm not sure how well they work together. Since we can only use 4 colors for the jam, I've been constantly thinking about the best colors to use. I think that maybe I should get rid of either red or green and use black to make things darker, but I also wanted the enemies to be a different color from the player. I would like to hear some of your thoughts about it.

Here is a piece of quick concept art I made that i patterned the rest of the sprites after. The idea popped into my head while I was brainstorming game ideas. 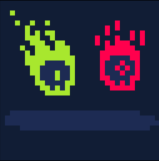 Here is what I have so far. I finished the basic game mechanics a few weeks ago and now I'm starting to expand beyond a normal space invaders clone. I just finished adding the particle effects and screen shake effect. I've never done anything like this before so this game is full of firsts for me. I'm planning to refactor the code and make it more organized before I add more features. I'm sure that you all have some advice for ways to improve the code and make it more efficient. I'm open to any suggestions you may have. After I'm done reorganizing the program I have several decisions to make. I'm trying to decide if I should add a health mechanic for the basic aliens or reserve it for bosses only.

below is the beginnings of my new enemy movement system that will make use of parametric equations as well as lerp and waypoints probably to make transitions smoother. In the carts below, the enemies are moving along a Lissajous curves. I think it looks pretty good for a swarm of aliens.

Another type of movement using lissajous curves
by Firebird

I decided to make a space invaders clone in pico-8 over the weekend. I've been having a bit of trouble with a weird collision glitch that only happens when my Alien entities react to colliding with the right side of the screen. I've Worked through the logic in my head and my code should work. I've tried numerous variations of what I currently have in my cart thinking that maybe there is something with the code execution that is causing it to be off.

I'm pretty sure that the problem is related to the bit of code below. However, I'm not 100% sure since I haven't been able to fix it yet :-)

Please direct me towards a solution if you can. This type of collision detection is usually pretty straightforward to do, but I've spent more time trying to fix this bug than I've spent making everything else.

[Edit]
I was able to fix the problem by moving the collision detection into a different loop to separate it from the position update so that the direction wouldn't be changed before all the entities had finished updating.

Have any of you used the Pyxel fantasy console? I just found out about it this week and I think it could possibly be made to work on the adafruit pybadge. It was designed to be a python substitute for Pico-8 and the creator cites pico-8 as his main inspiration for making it. It’s open source and could probably be made to run on the adafruit pybadge. There are a few developers working on a pybadge port of Celeste/pico-8 carts, but I haven’t found any more information about that project except for a few social media pictures and a GitHub repo. If the Pico-8 port to pybadge never happens then pyxel could be a possible substitute.

Here is the link to the Pyxel fantasy console: https://github.com/kitao/pyxel

Pico-8 is always my first choice for a fantasy console, but if it won’t be available on the pybadge then pyxel may be an acceptable substitute.

Pin To Profile
:: Unfold ::
Points Within A Square Domain
by Firebird

I figured out how to use distance formulas to determine if a point lies within a non-orthogonal rectangular region. I can see many possible applications of this and thought I would share my solution. I'm sure there is a more efficient way to do this, but this is the best solution I could come up with at the time that didn't involve vector math. I tried to comment my code to help people understand it better, but I didn't go into great detail with explaining the math. Anyway, It only took me about an hour to come up with this demo but I hope someone can find it useful.
test domain rotation square distance math
P#64361 2019-05-13 07:50

I wanted to do something new and interesting. After searching around the BBS, I found that nobody had published any strange attractors(I love strange attractors) so I decided I would be the first. I created a Lorenz attractor visualizer in java a few months ago so I decided to port it to pico-8. Then this week just as I started working on my Lorenz attractor I saw this. I can't believe It. Anyway, since Mattias beat me to a Lorenz, I will make a Rössler attractor.

I'm still pretty new to pseudo 3D, pico-8, and Lua in general so I will use the 3D plotting engine Mattias made until I can finish porting mine :P