And you thought the ArduBoy sounded neat.

https://www.adafruit.com/product/4200
They're working on porting NES emulation, and it comes with CircuitPython, so maybe a pico8 implementation wouldn't be out of the question.

That said, I might just pick one up and get busy. Who needs only 128 horizontal resolution and a static color palette? 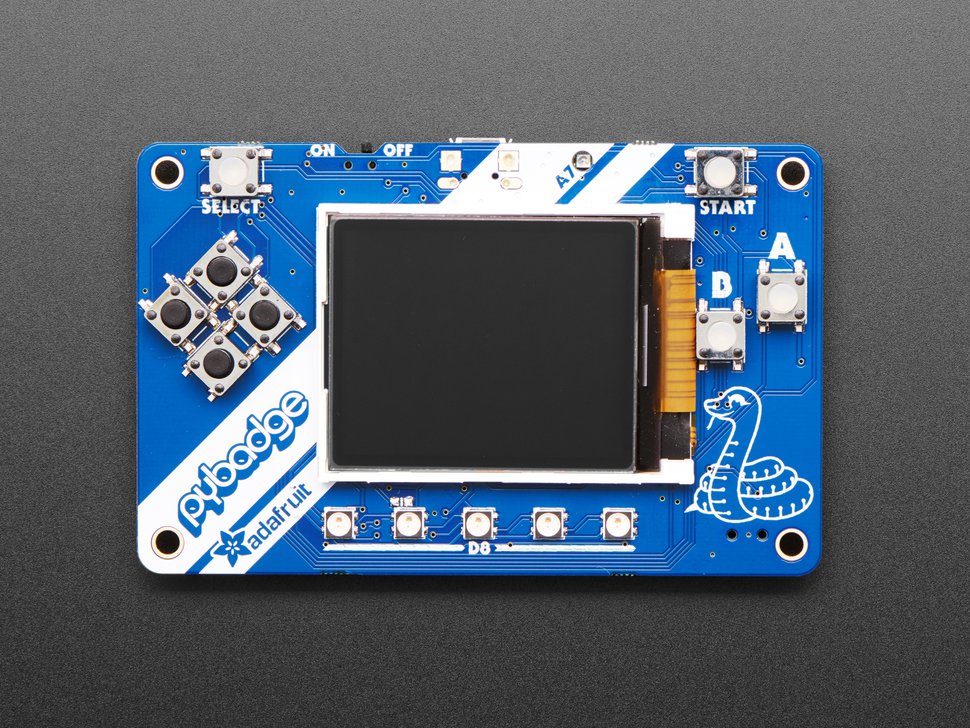 This is extremely cool!

I just bought one of these a week or two ago. I'm actually a little disappointed with it. The Hardware is fine but there are very little resources available for learning to make games with it unless you use MakeCode. I prefer to use Arduino or CircuitPython but currently, I can't find any tutorials for using either of those methods.

I feel like it could be good but It wouldn't be my first choice for making and sharing small games. I'm actually hoping to begin working on designing my own mini-console similar to the Arduboy over the summer. It would be so much fun to have pico-8 on the pyBadge but I don't think that will happen.

Honestly, I still think pocketCHIP and Arduboy are the best. The Arduboy is wonderful despite not having color. You really can't go wrong with its wonderful simplicity. There is also the pocketCHIP. Pico-8 and the pockeCHIP are perfect for each other. The pocketCHIP would be the physical embodiment of pico-8 if it weren't a fantasy console. I'm hoping that another Linux powered CHIP-like device will come along in the next few years to take the pocketCHIP's place. If not then I may start designing one for my capstone project ;)

PyBadge is a really new thing, you need to wait a bit for learning resources to be prepared. Adafruit is known from their excellent customer support, just look at all this guides at https://learn.adafruit.com/
Moreover, there will be a modification of PyBadge more focused on playing games (https://www.youtube.com/watch?v=YZzS7CwrE6w, https://www.youtube.com/watch?v=fAZNtn2E-NY).

Huh, a 160x128 screen. It's nice to see something that could fit PICO-8's resolution right to the edge.

@dobra-dobra, I understand that it's new and resources are still being written :) I'm hoping to start playing with it more and dive into circuit Python.

I'm glad to hear about the modified version. It looks a little more like what I was expecting from the PyBadge. The Celeste screenshots look promising. I'm trying not to get my hopes up though.

P.S. I'm still planning to begin work on my mini development platform/console over the summer. It's going to be very exciting for me. I'm only a little more than halfway through my degree but I won't let that get in my way :)

I just found this repository: https://github.com/tannewt/celeste.py

It's on the account of Scott Shawcroft, CircuitPython developer from Adafruit. They are on it.

Wow, you are really being a detective about all of this :-) I just saw yesterday that they will be releasing the new device soon. It's meant to be similar to the pyBadge but its more of a dedicated gaming device, with what looks like an analog joystick, instead of an actual badge. It's going to be called PyGamer. Who would have guessed that name :p

@dobra-dobra, HMM that repository looks more like they are just porting the celeste game directly to python. there was one file where they just converted the pico-8 API to python. I can't tell for sure, and I don't have the time to spend studying the code right now, but it seems like maybe they are just working on a parser to convert pico-8 carts to python?! Or maybe something that can run pico-8 carts almost like an emulator by just dynamically porting to python?! I'm really not sure but I can't spend any more time looking right now. This is all very mysterious and exciting. Argghh! If only I didn't have finals next week! I will have a really hard time not digging around in that repository :-)

I read books about Sherlock Holmes lately, so I'm on the peak of my detective skills.

Maybe better focus on your exams for now, but I think that you can take a shortcut and ask Scott Shawcroft abut details on the Discord channel of Adafruit. If I'm not mistaken he uses the same nick there as on the GitHub.