I'm just wondering which of the handheld machines currently on the market are able to run Pico-8 and its games. I just saw that a couple of recent threads are already active about this topic (I'm referring to the ones about Gameshell and PocketCHIP) but I couldn't find any list.

Since I'm very interested in development for handheld consoles and I would like to start with something related to Pico-8, I'm asking you which are all of the known portable devices capable of running our fantasy console!

Thank you in advance for the answers :)

GameShell (review), my favorite so far

8bcraft's RetroStone is not yet released. As soon as I get mine, running Pico-8 will be the first thing I try. :)

PocketCHIP is no longer available from Next Thing Co., but I see a few on eBay.

Anything based on a stock Raspberry Pi should work. PiGrrl 2 and PiGrrl Zero are do-it-yourself projects. Adafruit sells the individual parts except for the case, which you can either make yourself with a 3D printer or order from someone else's 3D printer via 3DHubs. These require patience and tools (soldering). The end result uses stock Raspian Linux which runs Pico-8 just fine. See the RetroPie/EmulationStation how-to for instructions on adding Pico-8 to those launchers, which people tend to run on RaspPi Linux gaming systems.

See also Pi0cket TinyPi, a RaspPi Zero-based DIY project inspired directly by Pico-8 (but runs RetroPie etc.). The kits are not yet available but you can read the TinyPi build guide. It looks obnoxiously small but I might get one anyway. :)

I've seen some other portable "retro gaming" handhelds as commercial products based on the Android operating system. These will probably not run Pico-8. I say "probably" because I've seen chatter about some of these things being able to host ARM Linux with hacks, but I don't have any experience with these.

The comprehensive but not helpful answer is "anything that runs a supported host operating system," e.g. anything based on ARM Linux or Windows. Pretty much every one I've tried so far has needed a bit of tweaking to configure controls and display options. PocketCHIP was the only portable so far to officially include and support Pico-8 preconfigured.

Off topic, but it would be great to have a PICO-8 device like the Pi0cket, which could actually pass as a "real" PICO-8, ie. with just a joystick/d-pad, two buttons and a menu button and booting directly into PICO-8 on startup. 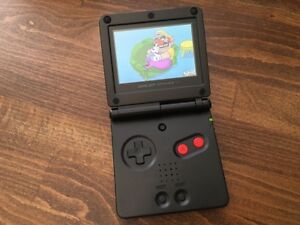 Perhaps use the shell of the GBA-SP which is nice in that it closes over like a makeup compact to protect both the keyboard and screen ?

Can we keep the handmade dedicated PICO-8 handheld chat in the other thread? This thread started with a question of what's available for purchase today, which is a useful reference topic. Thanks!

Sorry, D. I guess the real question is (in line with your question) I'd like to add which of those you listed can be PURCHASED mainstream today ? Not just what is homebrew one shot made by hardware gurus. :p

GameShell shipped their Kickstarter and they're taking sign-ups for the next batch.

You can buy a GPD-WIN on Amazon for $335. (There's a newer much more expensive GPD-WIN 2 that doesn't look worth it for this purpose.)

And of course you can buy all the parts for the PiGrrl kits, including the 3D printed case, with the links I provided. I don't think that answers the original question but it's an alternative that some might consider.

As far as I know Pi0cket kits are not yet available for purchase. And we all know what happened to PocketCHIP. :P