PICO EMPIRES
This is a SPLIT-SCREEN, 1-VERSUS-1, 4X - similar to Civilization or Europa Universalis. 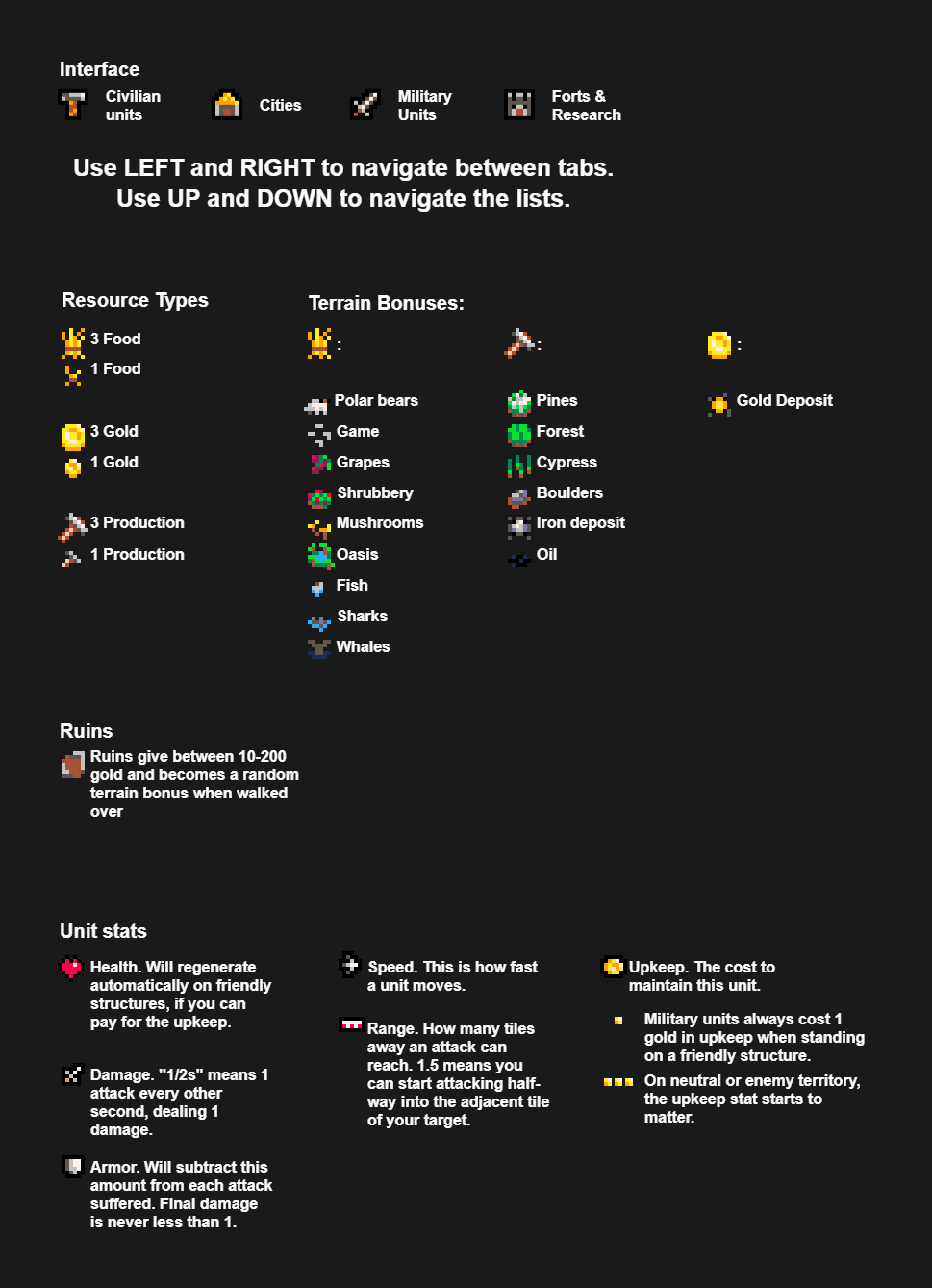 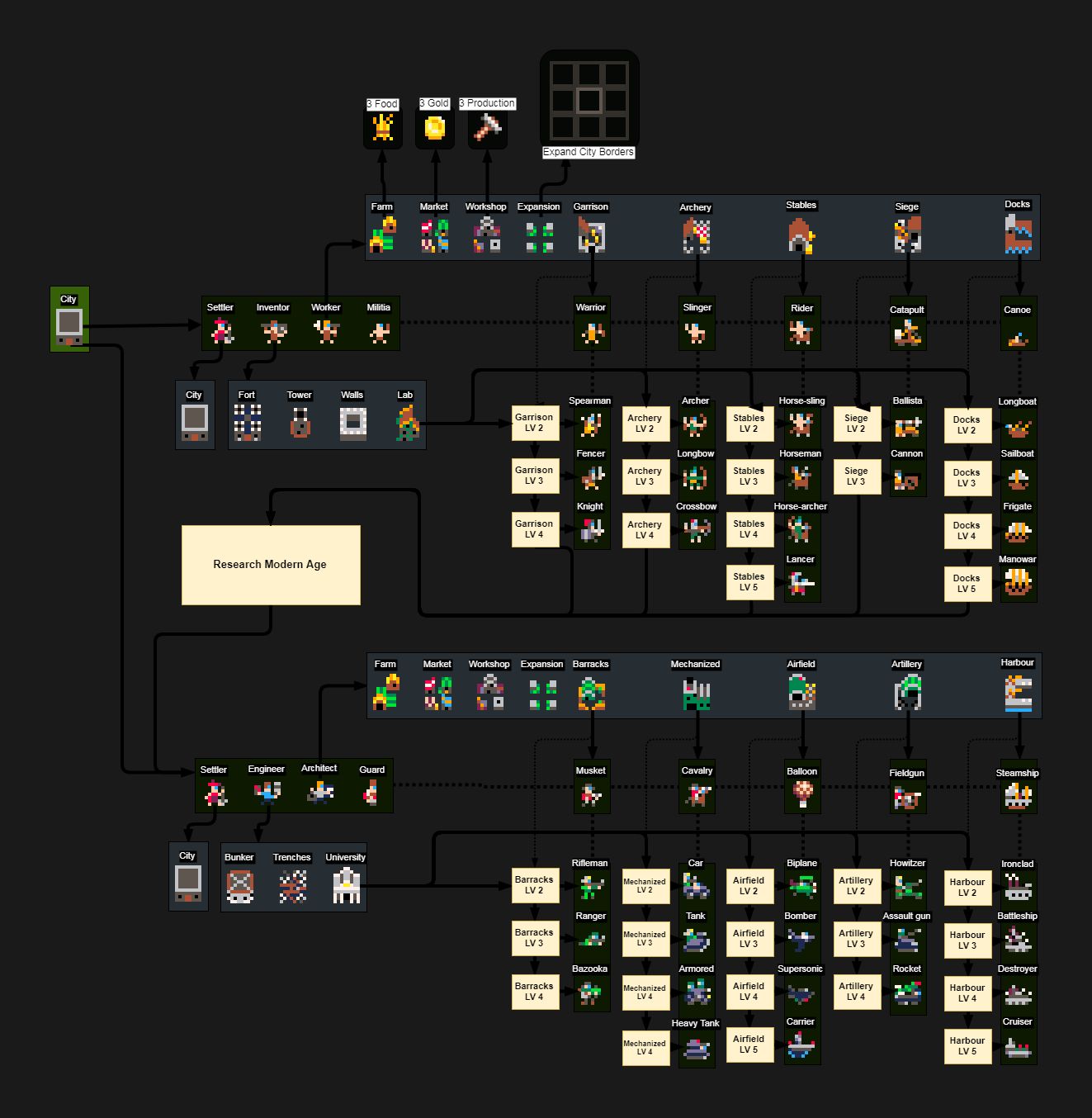 How to play
Use your Scout to uncover the surrounding area and explore ruins to gain gold and resources.
Use your Settler to find a resource rich strategic location for your first city.
Use your City to build, workers improve cities and build military buildings, inventors for defense and research.

When placing your first city, what it covers is important, but also the surrounding tiles since you can expand your city later.

When a building is placed, it must first complete construction (brown bar). This is automatic and simply takes a couple of seconds.

Every 'turn', each city harvests a number of surrounding tiles matching its population. Cities will additionally always generate 3 production from the center tile.

When a city has harvested enough food (yellow bar), it will grow 1 population. The bigger the city, the slower the growth. If the city is starving, it will eventually loose population.

When producing something, the city will collect production (white bar). When enough production has been collected, the selected unit will be created (if no other unit is blocking the city tile).

If nothing is being produced by the city, it defaults to "tax", which automatically converts all generated production into gold.

You can build settlers to establish new cities, but keep in mind each settler built will reduce your city population by 1.

To build new types of units, your worker will need to build one of the military tech buildings (garrison, archery, stables, siege, docks...).

To build even more advanced units, you will need to 'research' by first building the 'lab' which can be built by the 'Inventor'. The lab can once built be found under the "forts & research" tab.

The lab, as well as any building built by the inventor, can be placed anywhere and does not need to be in range of a city.

Military units cost upkeep, but if they are standing on a completed friendly structure, they will always cost 1 gold in upkeep.

If you cannot pay for upkeep, your military units will start to lose health.

Destroyed city improvement and city tech buildings never die, but simply become disabled for 180 seconds. They will automatically rebuild themselves as the war dies down.

Movement into a tile can never be canceled.

All units can walk in shallow water, but much more slowly.

Boats and ships can move on land, as long as there is a friendly structure present. This means that you can build canals by placing any type of structure to connect the bodies of water.

Damage dealt causes a knock-back on moving units. If your close combat unit is moving towards multiple ranged units, the knock-back can significantly hinder your chances of ever getting in range yourself!

You only need to research the final level of one type to access "Research Industry" (Modern age unlock).

If you no longer need a unit, you can disband it.

The Scout is a unique fast upkeep-free unit. It can't be built. Take care of it!

Walls and Trenches slow the movement of enemy units.

Artillery and siege units can attack 2 tiles away, but their health and speed is not that great!

Rocket can even attack 3 tiles away!

Horses are fast! But not in forests...

Mechanized units are generally more expensive to build and cost between 4-5 upkeep!

Airfield units are the most expensive to build and cost up to 6 upkeep!

Balloon range is less than 1 which means it cannot attack other units (units cannot occupy the same tile!). Only the buildings and tiles directly under it.

Man-o-war is a very powerful ship, but it mainly gets its power from more attacks per second, this means its attacks are less effective vs very armored ships like the modern Ironclad or armored units like knights

Tank and Heavy Tank have lots of armor!

Destroyer can shoot up to 2 tiles and Cruiser can attack up to 3 tiles away!

This is absolutely incredible. The amount of thought that went into this is... just wow. Nice work. I need to find more time to play this.

Incredible! What sorcery is this?

Note: I had to use a code minifier to get the compressed png size down within limits. If you would like the readable code, let me know

This is black magic. Vodoo territory. I suggest we grab the pitchforks and burn this sorcerer at the stakes!

Hi thewreck, this is my absolute favorite Pico-8 game, well done on creating such an amazing game.

I have found a bug that occurs when you try to access a lab when it is in the process of enhancing a building. the game crashes and is very disappointing for the winning player. As the code is very dense (and I'm new to coding) I cannot give suggestions on how to edit this to kill the bug but I will can give you the errror message.

The error message comes up as this:

Thank you W_Rabbit! The released code is of course extra hard to understand because it is minified, (and the reason is likely the minification).

When I get the time I will check out the bug report and upload a corrected version! Thanks!

Updated the cart to 0.85! Research bug crash fixed. It was due to the minifier.

I have tested research up to modern age with modern barracks, all working!

I am still crashing when trying to upgrade. Do you have an unminified version available?

Hello! Is the pre-minified code for this posted anywhere?

FYI, If you encounter the error with the lab, RESUME works just fine in Pico8.