After I don't know how many months, this is finally "finished", bang on the token limit (that part was easy and fun), but staying under the compression limit was a literal impossibility, and I had to run it through PicoTool to get it under. For that reason, I've made the un-garbled code available in a Google doc at this link. But that is exactly at the token limit! No room for edits... so I've also provided this version, which gives you a bit of breathing room if you want to experiment, it's missing some tweaks that the final game has, which are bug fixes and extra minor features like the level intro.

What made it in:

What's cut to fit into Pico-8:

One of the things I had to do was crunch down the music into fewer channels, to make room for all the music in the game, making use of the arpeggio feature to simulate multiple note harmonies. Here is a version of the game before I did this - Alternate version of main theme and water theme - the main theme and water music have 4 channels of music (no arpeggio effect). Just play through till you fall into the water, you'll get to hear both songs. Also this version features moving water surface and a smooth transition into the water, which was removed to save tokens (amongst other things!).

If you're a developer and you want to know more about how this was put together and the hurdles I overcame, I'm currently blogging about this on my site. I've only made one post so far, but please use the "subscribe" feature and I'll do an email to let you know when I make a blog update - I'm looking forward to writing about how I crammed the levels into more than the map area can actually fit!

Oh wow! I have spent many an hour playing this on my master system! It was baked in, always there. I need to get me some of this!

Yeah I used to play it at my friend's house, Master System II, it was built in! It was brutally unfair difficulty for young kids I think, but that added to the mystery at the time...

wow! this is amazing! so much in one little cartridge! kudos

Thank you! That's what I was aiming for... could I fit a whole, traditional platform game in a Pico-8 cartridge, the way the Jelpi demo promises, but never delivers...

Looks really cool! I got a crash while going through the cave-door thingy in the first water section. 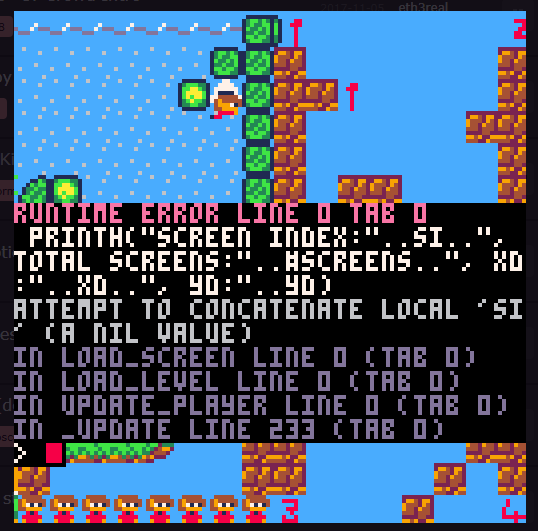 @wonderingmonster - there are no crashes in the final version - you were playing the JUKEBOX version. I've worked out how to not make that show up on the main page and updated the post. I've also updated the cart itself with a warning that it's not the full game!

@Domarius BTW, observed a slight difference in behavior compared to the original game (if memory serves). In the first level, if you break the second [?] block to reveal the black ghost, the third [?] block at the end of the map would give you a ring instead. As far as I remember, that was the trade-off: dodge a ghost from one block to get a prize in the next.

@bumper314 thanks, I was hoping someone would be dedicated enough to nit pick the differences!

Actually I didn't know about that logic, thanks for the heads up :)

Basically I went with; if you have a ring (either wearing it, or in your inventory) you get a ghost for a ? block. Since you can't have more than one ring in your inventory, that makes sense anyway.

@Domarius Just fired up an emulator to confirm, and I was slightly incorrect. The prize for the second [?] (after a ghost) is an extra life. Only tested on the first level though.

@bumper314 - Ahh that would make sense, a life, not a ring. I never knew about that behaviour! It's good to know... though at this point there's no code tokens left to do anything else, hahah.

It's not bad, but...the controls feel very awkward; hard to work with. Even compared to the older titles, to the series.

The controls could use some work.

Other than that? Not bad.