9HOLE is a platformer where you are also golfing! Hit the ball to the hole (under par!) and then get to the hole yourself!

WHEN THE BALL IS AIRBORN:
Arrows: Move the ball (a little bit!)
C,Z: releas ball control and control the character again.

SECRET: if you find the game a little easy, try pressing "Up" repeatedly on the title screen!

I will be doing more of a post-mortem in a bit, but I wanted to get this game online. Happy playing!

This is a great cart, I just keep FORGETTING I can move the golf-ball while it's in flight.

Truly a unique and original gem of a game. Thanks much, PBG !

I have had a MAJOR problem with communicating to the player that you can move the ball mid-flight. I didn't want to do any sort of tutorial (if your game needs a tutorial it is probably a bit too complex for Pico-8!), but it does not seem to obvious unless the game comes out and says it. I wanted the golfing part of the game to be less about timing the perfect shot and more about navigating a tough environment, which is why I added the movement. Still, if you have any tips on how I can visualize that aspect better, I am all ears.

I dig it. Couldn't get past the 5th hole, I think it was. Those were some tricky bubble jumps. There's a bit of a difficulty cliff in that regard, otherwise I would have kept playing. It's really fun though, and I like the ball control; it feels like I'm actually putting spin on it. How many levels are there?

One thing I've noticed is that your ball will repeatedly collide with obstacles producing a spray of particles if your ball is 1 pixel away from something to the left or right.

I love this game, i came here to golf and i found a very funny game! congrats.

Regarding the tutorial on start up i don't think that it will annoy the user, you can do a for example a small tutorial page accessible pressing "o" in the game menu, so if one wants to skip it he just press "x".
Personally i like having instruction to read somewhere, in case i have a feeling of forgetting something :)

This is really nice, great concept and all and I like that it has its own unique style to it.

Currently stuck on hole 8, it's really brutal (but fun!).
Edit: finally beat it, got a lot easier once I figured out you could not only give your ball a push to the left/right but also up and down.

Thanks for the feedback, all! @qbicfeet - I am impressed you beat it! You should give the hidden hard mode a shot (mash UP on the title screen).

I am working on some bug fixes and balance tweaks that I hope to update before the end of the day - some of these include:

Thanks everyone so much for playing! Overall, I am fairly happy with the game - I just wanted to make something that exercised all of the basic capabilities of Pico-8. I've never actually completely written game code before (all of my previous game experience is with GameMaker) so this was a fun learning experiment! In my next game, I will probably use an object-oriented approach rather than list-keeping for tracking all of the objects in-game.

The list-keeping appraoch (I pulled it from the Jelpi demo) is a really clean way to program a platformer, but once you hit a certain level of complexity it becomes difficult to add new features and have different objects, since your list needs to handle every variable and every movement possibility for every object in the game. The result is that your code becomes very 'rigid' - it becomes difficult to use your code to experiment outside of your levels.

Anyways, I have a lot more thoughts on working with Pico8, but I will probably write them up more formally on a blog. Thanks again for playing, everyone! I am an engineer at a major computing company, but my proudest technical achievements as of late are getting people to try my games, which I never thought I would be able to make. 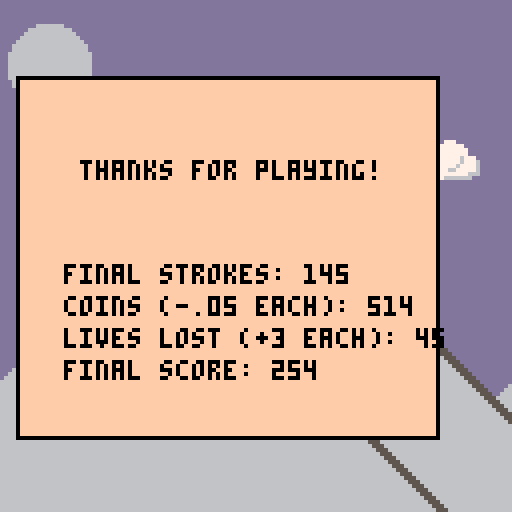 That final level was rough.

Very fun game, probably one of my favorites ever posted on this site. Platforming + golf is such a genius combination.

That spraying ball! I think I nailed it in v1.1, but it's been a major thorn in my side.

I can't believe I forgot that jump in level 2! I made last-minute edits to level 2 when making my hidden "hard-mode," and I must have missed that one.

@qbicfeet - I am flattered beyond belief that you not only beat the game, but you died 45 times doing so! In your honor I decided to not give a game-over condition, but rather to just let the stroke penalty be punishment enough.

Thanks again to everyone playing! I think I might add a top-score feature, since this game kind of lends itself to that. Just gotta figure out how to use the memory features...

I like how you've mixed platforming with golf here, especially in Hole 5 where you are required to switch between the ball and the player to get both of the characters to the goal, very nice!