Just frolicking in my brother's new fandangled lexbook network & thought I'd introduce myself. For quite some time I've been a frequent Tigsource snooper and am looking forward to hanging out on this BBS.

If anyone is a fan of BBC Micro, Amiga & arcade games, I'm looking forward to reminisce & critique with you. There's a lot to be expanded on in the good old masterpieces interms of new game design. I noticed last time I was in America all the arcade games (with the exception of Tron(!)) are the same here in New Zealand. Ghosts 'n' Goblins was really the earth-shatterer for me. It's nice seeing that magic come back to life, Arvoesine for example.

Currently I'm making an Asteroids clone called Gromulus which will be ready by the end of the year, & there's lots of GFX I want to share on Pip of other works in the pipeline. The Dark Moon of Arcalon especially, which is a new Jasper's Journeys type collaboration with Joseph.

Anywayz, nice to get that out of the way. This is the first thread I have ever started - perhaps it could be a "hello world" type thread.

Hello Jumps and welcome to the BBS ;)

Aha! I see you've been trying the file uploader, Jumps.
What is THIS? 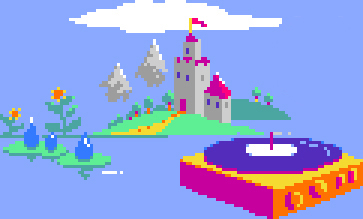 Thanks Grey! I remember you from the 2.0 BBS, nice to see you here

Zepstar - the record player is for the mp3 site, forever in production (yerrk)
I love that file uploader, I'm going to upload all kinds of weird crap I can just tell!

hello jumps and lexaloffle! here in anticipation of some amazing game developments in the near future and feeling lucky to be one of the few people to play voxatron before its release! thats one awesome game! it makes me get all tingly like it was back in the old days when i played batman on a amstrad64 (ocean 1986)....

seeing as i share a studio with jumps i guess ill be one of the first playing the completed game...anyways its nice to be here in lexaloffle land!

p.s. my niece loves playing cat cat watermelon and smashing the balance/tower with the next object if it starts to collapse