In “Jodorowsky’s Sandmaster”, you play the role of a titular “Sandmaster” on Arrakis, the desert planet in Frank Herbert’s “Dune” universe. I imagined this game many years ago. I first implemented it in TurboPascal in the 1990’s, and have since then created a Java version. The obvious next step was to do it in Pico-8.

I called it “Jodorowsky’s Sandmaster” in tribute to this visionary director’s failed attempt at making a motion picture out of Herbert’s landmark Sci-Fi novel in the 1970’s (an epic story recounted in Frank Pavich’s 2014 documentary “Jodorowsky’s Dune”, which I all-heartedly recommend). I drew inspiration from Jodorowsky’s work in redesigning my game, for instance by making the spice a pulsating, organic, psychedelic blue instead of the more conventional cinnamon brown. The patterns in the sand are also meant to be reminiscent of Chris Foss’s “fishskin” spaceship designs. Of course, none of the great artists who were involved in this ill-fated movie project were involved in my modest game. Should Mr Jodorowsky become aware of it and not wish to be associated with it, I will of course remove his name…

In Frank Herbert’s universe, the Sandmaster is the person in charge of supervising spice mining operations. In the game, you pilot a “carryall”, an airborne vehicle tasked with transporting the spice-mining harvesters to extraction sites. The controls are very simple: the arrow keys set the direction of movement. Hitting the key pointing opposite to the current heading brings the carryall to a halt (hovering). Hitting the “Z” key will do one of 3 things: if above a spice-blow, it will lower a harvester (which immediately start collecting the precious substance), if above an already deployed harvester, it will lift it from the ground. Finally, if above open desert, it will drop a “thumper”.

The difficulty (as everyone familiar with the book will know) is that giant worms roam the desert of Arrakis and search and destroy any object producing a rhythmic noise, such as a thumper or a harvester. In the game, worms perceive vibration up to a distance of 16 sprites and will home into the nearest source. The game consists in finding spice (there’s quite a big patch of desert to explore!), then extracting it while luring worms away with thumpers so as to allow harvesters to complete mining operations. In the game, “wormsign” takes the form of a shifting disruption in the sand pattern. Worms cannot cross rocky areas and have to go around them. If a worm comes within 8 sprites of a harvester, the whole screen starts vibrating as a warning of imminent disaster.

You can deploy as many harvesters and thumpers as you like. Deploying a harvester costs 10 points, a thumper 1 point. Losing a harvester to a worm costs 100 points (this includes financial compensation to the workers’ bereaved families ;-), so look after them! Each spice-blow is worth 100 points if fully harvested, which takes some time: you will know that mining is complete when the harvester icon’s animation stops (it will still attract a worm though!) The load is only secure once safely inside the carryall, but you can lift a harvester out of harm’s way at any time (you only need to be right over it and press the “Z” key) and bank a partial load.

The game lasts for a 12 hours shift (countdown in the bottom left corner), after which the score (spice cargo minus costs) is computed. The game should keep track of high scores (enter your 4 letter/number identifier using the arrow keys). If there are harvesters still deployed at the end of the shift, the game will continue until you pick them up (or they are destroyed by a worm), but you cannot deploy new ones (you can still deploy thumpers though).

This is so cool. Love the implementation. As a huge fan of Dune, I love this addition to the PICO-8 universe. :D

Man, maybe I should look into making an El Topo or Holy Mountain game. El Topo would translate so well. I love me some Jodorowsky.

That title screen feels so Holy Mountain to me. Awesome.

I love how much time and thought you've put into this over the years. Pet projects FTW. :)

I just played 2 rounds and wanted to report 2 things

1 - I believe the game would be more challenging if it was not allowed to stop the carryall.
2 - the game froze while reaching the end of the round :/ 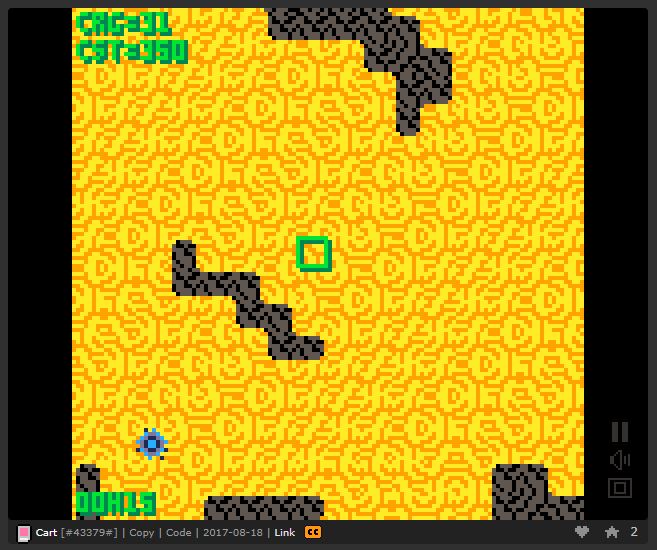 Hi Ionah, thanks for your comments.
I could of course easily remove the option to stop the carryall. I'm not sure that it would be to everyone's taste though. Anyone else care to comment?
Regarding the freeze bug, that never happened to me... Did you have any harvester deployed at the time?