It started a few days ago but it's running until the 17th so you haven't lost too much time yet. Lowrezjam games are 64x64 but you can get this in Pico-8 by doing a poke(0x5f2c,3).

I'm working on a pirate sailing adventure. I've got sailing around working ok, working on disembarking so you can walk around islands to look for treasure. Here's my progress so far: 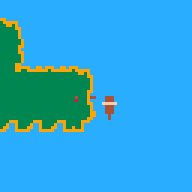 Good idea @mrh to start a thread - as this Jam is perfect for PICO-8! :D

Really like your idea and looking forward to playing it. Sounds like a mini "Pirate" GTA! :D

As for me, I'm creating (hopefully) a sort of mini-version of one of my favourite games, Another World (aka Out of this World).

Still lots to do yet, but reckon I'll start feeling the time pressure next week! :o/

I thought I'd throw my thing in here and help with getting the momentum going.

Minified Pirates and minified Another World. I feel like I went back in time. Feels totally summer to me with those selections. Very cool.

Well, my submission is attempting to recreate the Lost Woods type of puzzle in the Zelda games. Real simple. I do have a bunch of ideas to add to it. Not sure how many will make it in and how many will work. For now I am just generating the maze, the length, and the difficulty then sending the player out into it. I am still thinking about how to make it really fun rather than an exercise in finding the correct algorithm by recognizing the incorrect moves.

@Liquidream that screenshot looks amazing, I wish I could draw (/pixel) like that.

@Rahrahrah Sounds fun, that's a really iconic puzzle and I'm interested to see where you go with that.

I've made a decent amount of progress. You can now walk around islands as a 2px man with collisions working properly, and there's the beginnings of dialog/interactions. I also came up with a neat way to draw a zoomed out world map without using any graphics resources, so here's a picture of the map and a full scale island. The final map will actually be 2x that width as that's how big the PICO-8 map is. Scaled down, it fits neatly onto two 64x64 screens. 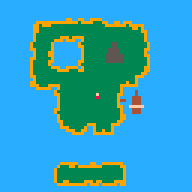 @mrh: Thanks! :D
Still totally looking forward to playing yours - I assume it's no coincidence that your island looks like a skull? :P

Here is my current progress:

I've finished my tutorial area ("Tutorial Cove"). This is a big milestone because it means all the core gameplay systems (ship movement, land movement, dialog/shops, digging for treasure) are at least functional. 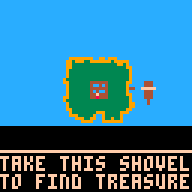 @mhr, thanks :D It's Pixel-dungeon kind of RPG
Your game also looks cool :D I wonder, how did you fit all those dialogs into 64x64? Great job!
For me, 15 days is too much. If on the second day of Ludum Dare I run out of things to fix / ideas, can you imagine, what happens now? :D My game's core mechanics are also done, I'm just adding enemies/items.

I've made a fair amount of progress this week. A lot of it has been stuff that doesn't show up in screenshots, lots of aspects of the gameply have been polished up. I have changed the art style too though, and started on some graphical effects. The world is starting to get fleshed out too. It's all coming along well. I'm hoping to have the game complete this weekend, so I can have a short beta test phase before the jam ends. 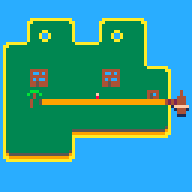 Haven't had as much time to work on it as I wanted, but I have a little bit of an action puzzler on my hands. Just needs some balancing and sprucing up.