River Raid was my favourite game growing up with an Atari 2600, so I've tried to do my best to honour the original (quite tough with only 10x11 pixels!).
All levels are procedurally-generated, just like the original. So in theory, the game is endless!

INSTRUCTIONS
• Fly as far as you can down the endless river (don't forget to shoot bridges to enter new areas!)
• Look out for ships, helicopters, jets and oh... hitting land!
• Push forward if you wanna go faster (or pull back if you're scared) ;o)
• Finally... don't forget to COLLECT FUEL by flying over Fuel Depots before you run out and crash!

This is really fun! I found a small bug where I was able to shoot through the bridge just before slamming into it though :-(

I really like the old school TV model and Atari!

Oops! :o/ Thanks for the bug report TheTomster.
I think I'll have to wait until the voting period is over before I fix it thought (or else might be disqualified?)
Thanks again.

Very nice game! I included it in my compilation video series of the Tiny TV Jam games, if you’d like to take a look :)

OMG I'm so excited you did this. River Raid is one of the best games ever made. But are you sure the original was procedurally generated? The levels were the same every time.

@Jupiter_Hadley:
WOW! That's awesome! Thank you so much for featuring my game on your channel.
By the way, the reason you heard the "siren" sound was because your fuel was low... 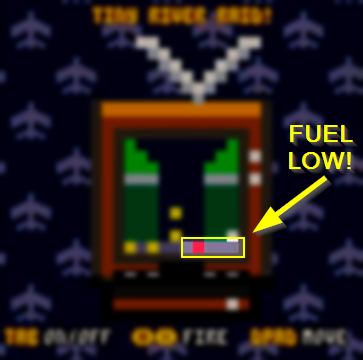 ...to avoid this, just fly over a fuel depots now & then to collect fuel:

...otherwise you will eventually run out and crash! ;o)

@EatMoreCheese:
Thanks! I'm so glad you feel the same; River Raid is still such an underappreciated game.

Yep, both the original and my "tiny" remake use procedural level generations, but the key to both games not being completely random every time is to always uses the same "seed" when creating a particular level. The seed forces the random number generation to always spit out the same sequence of random numbers, which results in the same "random looking" levels every time you play. :o)

If anyone is at all interested, Carol Shaw (the legendary developer the the original Activision game) explains in this interview how she achieved a similar result with only 4k of memory to play with! #bonkers

Hey @liquidDream just wanted to say I really like this one. Love the use of color and it's a blast to play. Great job!