You're a submarine of a worn-out article.
When ballast isn't taken, you don't sink.
You'll collect all treasures!

I made a simple game for friend who begun to learn Pico-8
foreach isn't used, 306 lines.

What an interesting and challenging puzzle ! Could find no problems. Game and interface are slick and accurate. Might have an option to save game level via CARTDATA.

Also, instead of a constant clicking you might have intermittent and sparsely spaced sound like a sonar: 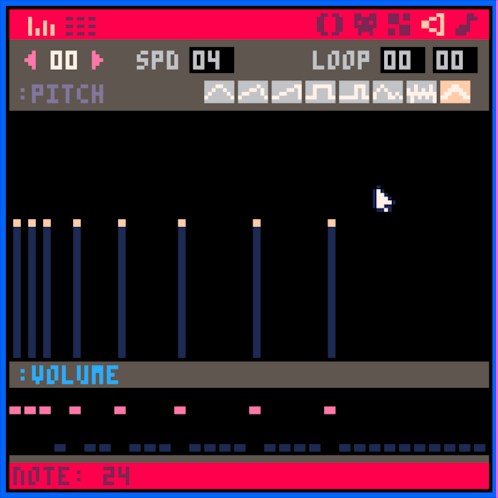 Once you get the basics down though, it'd be nice if something were to move in the later levels, like a shark or something. I made it to level 11 and there's just more mines.

I made a mod that ramps up the challenge much faster than the original.

Pretty neat mod, Tactics. But doesn't the original start without the ballast ?

It sure does! I switched it in the mod so that the user has a little bit more options.

Wow, you really made that fool proof. Nice job ! Will have to play it to see how far I can get now.

I'm running into areas where I just cannot get all the coins at that high speed.

Okay, here is a SONAR sound I put together. I also changed the key from DOWN to (Z) to release your ballast. Removed increasing the speed of the submarine with each level as it quickly became too hard to navigate - at least for me.

I love it! The sound is excellent, and moving the drop key to z makes more sense than down.

The speed increase is pretty harsh, I was aiming for an arcade-like feel where you play for 1-3 min before you have to dig out another quarter.

I like your mod a lot, you can play it longer and see more levels, and once there are tons of mines on the field it gets pretty interesting even with the slower speed!

Real credit of course should be given to MACOP for providing the initial code. I don't know if he realizes how great his code is to inspire such changes for increased playability.

Thought I would give this game a bump as I am in fact working on a submarine type of game right now. Not Battleship though. Yep, a real action game.