Ha! That seems like a really neat idea, I look forward to seeing where you go with it.

Importing graphics shouldn't be too bad; the sprite sheet is a specific and well-behaved chunk of contiguous memory, and there a few different folks have written one or another tool that reads from and/or writes to the sprite sheet, so you may be able to find some reference material there even.

I'm getting close with this, but I'm trying to figure out if there's a way to change sprite memory in real-time using the javascript Module interface.

Does anyone know where the runtime memory is stored in the JS Module?

I haven't tried writing directly into the the heap that emscripten generates called HEAPU8 (that contain's PICO-8's entire memory), but I guess it would be possible. You'd have to figure out where in HEAPU8 that data is -- perhaps by setting a magic value in the sprite data and searching for it.

Another method, if you can wait for 0.1.7 next week, would be to use the new GPIO (data transfer) pins that will also have a web implementation. Each frame, you can read and/or write up to 128 bytes of data, so around 120 8x8 sprites per second. Would that be fast enough?

Thanks for the swift reply!

1) Great idea! I'll write some sweet magic right now to figure it out!!!

2) I actually want to show this on Monday. I'm doing it at school (for my Master's) and I need it for a class demo haha. XD So I'll try 1) first, but with 0.1.7 definitely take advantage of official support. I'll only need to call it every time the user changes a pixel in the external editor, so it sounds like it will be plenty. 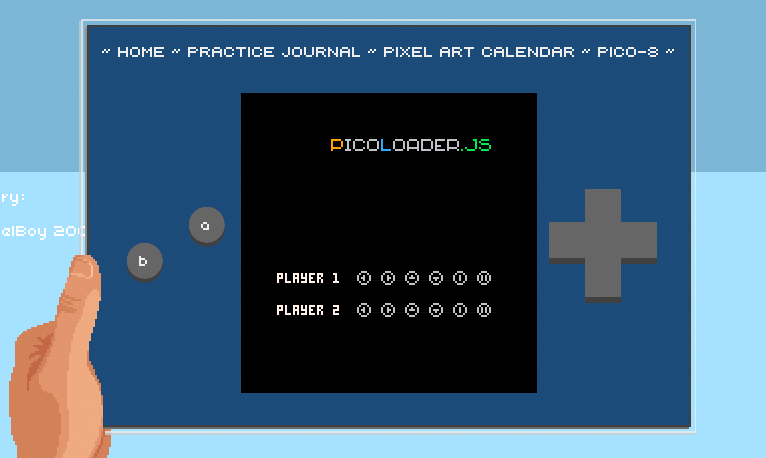 But the buttons work … which kind of means you'll be able to use a real touch screen to play on mobile? Has anyone done a mobile player/embed yet?

I didn't have time to come up with a more original design, but here's the working Pico-8 integration into Pixel Art Academy. (Menu is obviously placeholder WIP. Also the GIF recording somehow produced weird blurry pixels. It's pixel perfect in reality.)

In the storyline, you'll work in a student game dev club and do art for the team. Here's a prototype of the drawing app.

After you've drawn your art, when you go back to Pico-8, the sprites are magically updated!

Of course this is just the very first step in this storyline. Later on you would get to work on bigger games, work with an art director, maybe even vote in game design decisions. The idea is to have a context for learning pixel art and the game presents you with both challenges and also resources from which to learn.

I would love to hear your thoughts. Maybe we could even get some kind of official collaboration going? I would love for Lexaloffle to be kind of Nintendo/Sony of Retropolis (the city Pixel Art Academy is set in) and Pico-8 would be the DS/PSP equivalent with Voxatron as the more powerful Wii/Playstation. I would love to have in-game commercials around the city for the two machines and make Lexallofle HQ or virtual Pico Pico Cafe one of the locations in the city with Zep as an NPC (or PC if/when you log into the game!). In any case, I love Pico-8 and will do whatever I can to promote it.

Hey Retro,
Only just found this post of yours - looks awesome! :D
As a pending "freshman" of Pixel Art Academy, I'm certainly all for PICO-8 being represented

That would be awesome to have Pico8 in Pixel Art Academy (or at least the color palette and restrictions). I'm looking forward to it even more now!

It's not mine, but the game 'Pico Monsters' (A Pokemon Clone) might be a good one to change the sprites for as you'd be able to change what the different monsters look like quite easily.

Wow! What a nice idea. And I simply love the art style in presented pictures. Good luck with your project!

Hello everyone! It's been a while since I made that prototype in 2016. I've been working on Pixel Art Academy full time since then and after many other parts of the game got done, I'm finally in position to bring this prototype into the game itself.

I wanted to have the PICO-8 screen bigger, so I changed the device to a horizontal orientation. Here are a couple mockups of the new form factor: And the snake game in action:

I also recently started a YouTube series to explain more about Pixel Art Academy. Next episode will be about PICO-8 integration. I will post it here when it's out.

incredible! and such a awesome addition to the community