Mark as Spam
Aegypt
by Oldow 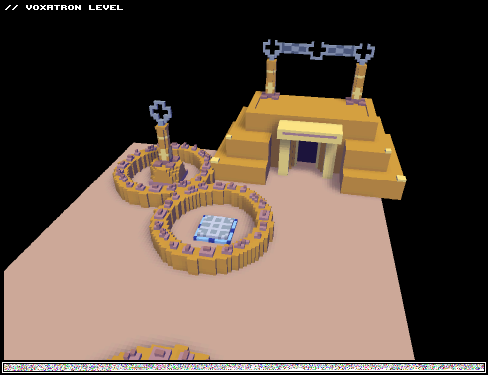 I am excited about Voxatron, checking blog everyday, looking forward to alpha and I have a question regarding that matter.
But firstly, let me note that I am from Czech republic, have learned my english at school and on the internets, so sry if I hurt you language sensibilities.

Voxatron is undoubtably a game with potential. I think that the difference between it being a great and godly game could be in the approach to user content.
You see, the posibility to create your own worlds is probably the reason many of us are here, but this function has two problems, that are usually not widely acknowledged.
First is, that there are not that many people, that are willing to create a thing so big and devote so much time to it, that it is really worth downloading by others. The second problem is, that there usually is still so many of these people and their great mods, worthy of playing, that the field is very fragmented and orientation is difficult, more so because some of the mods are the wishes fulfilling kind, that are not making the game anymore challenging or interesting.

I saw this situation in the Fallout 3 and vegas modding communities and I think that it is a expression of a general function. The problem here is preciselly in the fact, that each modder is there on his own and can only pull off a project of certain size. Also ordinary people would love to make a few maps, but are not going to finish big projects. And I see that the biggest loss are the people, that would love to devote themselves to a certain element - lets say map building, but are not interested in others, scripting and vice versa.

I do not think this is necessary. I think we are by our human nature able to work in communities, I think many of us like more to take part on a huge work, than doing ourselves something mediocre. Why did we not than already, unite in any way, on other occasions? The problem is in distribution of authority. Basically, there is a need for somebody that would make this happen, take care of the project and responsibility, manage the people, someone to become the authority on this.
The feeling of entitlement to authority comes from two things. Either from your certainty of ability, earned by experience in the field, that makes you someone who knows what he talks about, or by being a bit naive and submitting to your ambitions, blind to the problems and responsibilities. But people who have the first kind of authority do not usually aspire to lead, because it is really not worth it in the end.

And even if they wanted to lead a bigger project, they still feel to be on the same level as others with same amounts of experience and so the field is still a ecosystem of competing works.

Words like authority and management sure sound lifeless and no fun at all, but they do not have to be. In this instance I think there could exist a hierarchical system of management, that would be fun for everyone and would allow even a guy that wants to devout fed dozens hours to playing with the editor a chance to be a part in a big work, widely played, a small part, but still a meaningfull one.

Because playing with editors is fun, but in the end it feels a bit meaningless, if you do not reach the level of complexity, that makes it interesting for others.

The solution of the problem lies in an act, performed by the creator of the game, the highest authority, that would divide the responsibilities between people that want them and give them official support. Only by this act, there could be an effort, to make something that stands alone above others, even if wacky and chaotic and strange. the point should be moving the competition into the work and limit it, instead between projects. The point should be making one chaotic user created project, instead of users creating singular projects in chaotic unregulated environment.

The only challenge is to invent such regulating frame, so that it ensures maximall efficiency of integration of user submitted work, while leaving maximum freedom to imagination and intentions of the user.

I in no way suggest, that people should be dettered from working on their own project. The whole point is creating a environment of work on singular project, very helpful and open to newbies, so there would be a chance to make your work count and supported from official authority, so it would grow quickly and could become a leader and growing project.

The idea of freedom in creating has its limits, it can be a misleading one. We are never fully free, we are humans limited by our abilities and time and other things. We can only feel the joy of accomplisment only if our work is meaningfull. The intention of leaving maximum freedom to the users is noble, but would be a waste not to give a meaningfull alternative to those, who do not need really that much freedom, that need help but can also help others. It would be a waste not to send a message that if you want, your work of any kind is welcome in an official project under the management of experienced people, for a price of abandoning a bit of freedom you can not really use.

There are numerous question about how this structure of work would be best organized, but there is something that has to be made clear first.
The official support is necessary. I do not think, that I am a person that could pull this off even with it. So the problem has to be understood, acknowledged and dealt with, or judged as unimportant and forgotten about. The responsibility/authority is held by the author of the game.

And so, this is my question. How will the user submitted content work? Completelly free of organization? Is it a good idea?