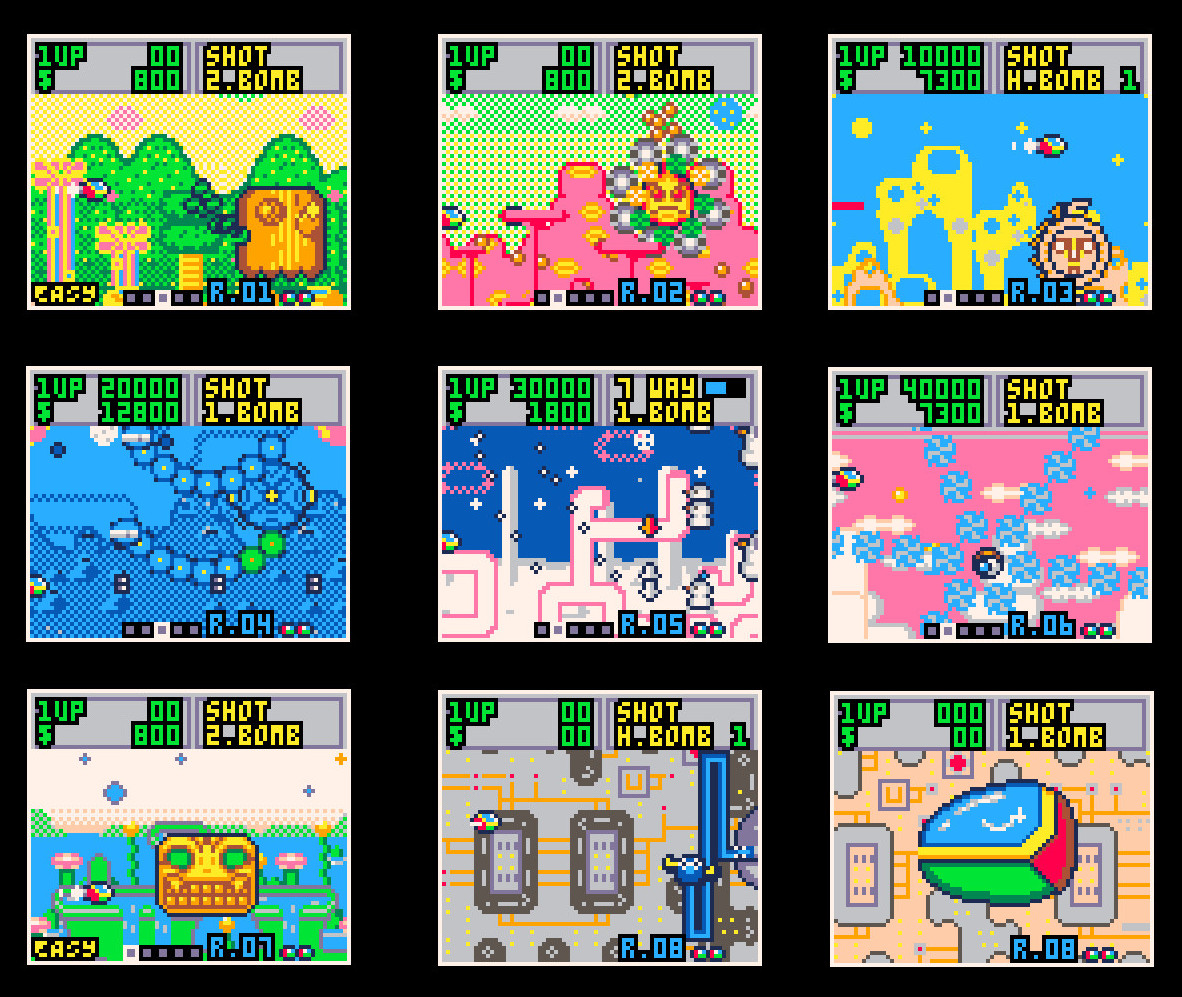 This is a demake of Fantasy Zone, SEGA. Boss rush mode is available and you can fight all of 8 bosses.
I made this game to feel "Wow, looks like the legendary game Fantasy Zone when seen from a distance!".
I never made this as a perfect clone. There are many differences from the original game. If you select EASY, player doesn't get damaged. In this mode, you can enjoy tour of all bosses of Fantasy Zone and "EASY" is displayed at the bottom of the screen. If you select HARD, collision detection of the player is enabled.

Some stages need loading next cartridge when defeating the bosses. If it fails, the game cannot be continued. Please play this game with line connected well.

Could the shots from the boss number 4 be a different color from the background?

I have seen the ending in easy mode, but I'm not sure how to properly defeat the later stages of the final boss in hard mode. I have never played the original Fantasy Zone on any platform, which might help. Watching some videos has given me some ideas to try.

That was insanely intricate even if I had no idea what was going on sometimes.
At the end the melon bug didn't hurt me? despite touching me? in fact I didn't get hit at all so not sure if I was just good or the hitbox was small or what.
but ya fun stuff! never played the original but the graphics and all are nice here even if a smidge crampped.

@SmellyFishstiks : Did you change the difficulty to "hard" at the start? By default it is "easy," where you don't collide with anything. This means it's possible to be in easy mode and not be sure if that's why everything is missing.

@Cowirrie Oh dang no collision on easy? ya I was.

@Cowirrie Thank you for playing! Color of shots from the 4th boss is as same as the original game so I'm not going to change it. The shots brink and I think you might see them...
Yes you can see videos of the original game and know how to defeat the final boss. You can defeat 5 insects using shot only and the 6th insect can be defeated by "Heavy bomb". Enjoy!

@SmellyFishstiks Thank you for playing! I'm glad that you've enjoyed! The original game is a masterpiece of shooting game history (released in 1986) and the graphics are very nice.
@Cowirrie Thank you for the explanation about easy mode.

@marcydog : Thank you for the advice. With it I was able to play through all of the bosses in Hard mode. Things I bought:

@Cowirrie Good! You did it!