This game took about a month to make. It's similar to my last game, EGGHUNT, in terms of the layout and walking, but is much more complex as this game has enemy AI, weapons, and crate pushing.

I thought I saw this game earlier. No ? Well, I love games like this which always have neat RPG elements in 'em !

@dw817 - yeah, you did. I had uploaded it in WIP a few weeks ago. The WIP covered the first dungeon, no weapons, and only 1 enemy type. This is the full game with more dungeons and enemies and items.

Full game ? Well now I simply must play it to conclusion. :)

... running into a few problems. I lost the first game, started over, had strange player placement. Decided to run the game from reboot to see if it happened normally.

Still had still strange placement. Let me show you. 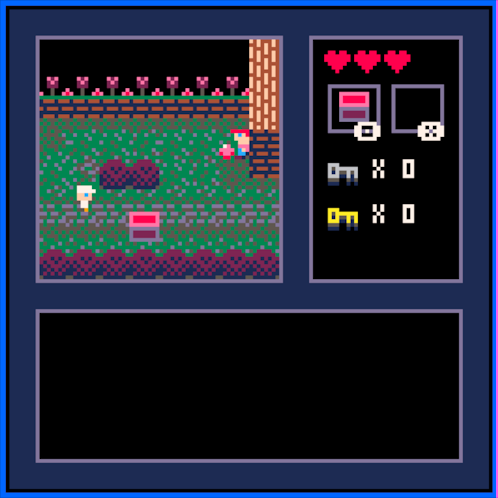 From here I cannot move right despite there being no obstacle. 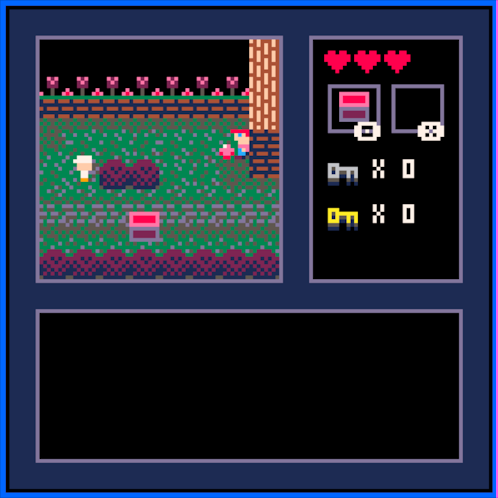 From here I can move right, directly onto a bush, and I shouldn't be able to. 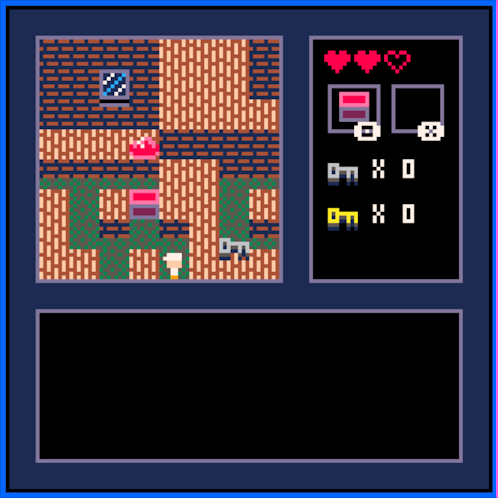 Check this out, a slime walking directly on top of the wall.

Something is getting messed up I think when you are dragging the crate from one screen to the next.

I've had problems like this myself when making 'sliding' grid type games. The easiest solution I found is to ensure the player or object is locked onto a grid square before allowing controls.

So if the player is at horizontal 8, and they move to the right, controls will not be released until player is at the next step, in this case 16, then 24, then 32, etc.

Objects too. They are not free to choose a different direction until they have arrived at their grid locked position.

Also, I might recommend enemies that are defeated stay gone. It can be unfair to walk out one particular door and immediately the slime is directly upon you or blocks you from continuing your quest with no way to run around or use your box weapon because of the unique door you entered.

** CORRECTION: I found the Pizza Cutter, this made it a lot easier.

A simple way to do this might be that if the player is one square away from the box (but not diagonally), even if they are not facing the box, pressing (Z) will immediately make them grab the box and pull it one step behind them.

As placing the box over a switch is silent, you might have a sound occur to let the player know they have done something good. Also when you unlock a door with a key which is also currently silent.

Boss music continues to play after player has died and resurrected and teleported to last checkpoint.

You've made a lot of corrections ! It's definitely looking better.

When you start the game, on the first map, if you go to the far LEFT and then UP or DOWN one and then press LEFT again, the player faces to the right.

Minor - but may answer some questions you had about your code.

oh wow! Ok...now that's just weird. You can do it too in the dungeons. Something is firing off weirdly. You can only do it when going LEFT, you can't do it going RIGHT. Aieeee. At least most everything else is stabilized.

I did figure out tho the original problems you pointed out were't a frame rate issue, it was an ordering issue, which 1 little line of code fixed thankfully. So hopefully this will be the case too.

dw817 - I fixed the left-facing bug. thanks for pointing that out. The problem was that I forgot to add the variable to tell it to flip the graphic. d'oh. I had it flip in the walk cycle and not in the initial direction change.