I'm almost done with a bullet storm game called "Mini Mech: Final Assualt" and I need some help. I attached a file with the three bosses in the game along with the main character. If you have the time I need help making attacks for the bosses to make a fully functional boss. I have done some work on them as you will see, I made all of their animations and made some for warnings as well. The file contains three folders: one for the Mars boss (normal difficulty), which I completed (feel free to make adjustments), one for the Hydra boss (hard difficulty), and one for Janus (the final boss). Whatever you make I will use and possibly make some minor changes, for instance the color of the attack. I will also make the final adjustments for the boss difficulty. I trust both of your creativity and talent. If you need me to make any more animations please let me know, and thats if you even what to help me out. I can make some animations or models for some of your projects if you like.

I also need help with the plasma grenade pickup, I can't get it working right. 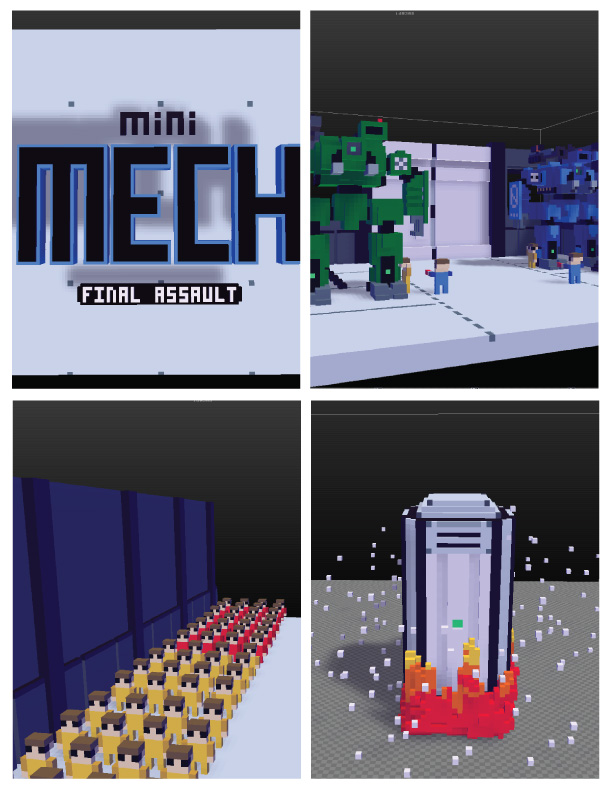 Wow, I'd love to help with this. It looks like you've done some really great work so far. I'll see if I can work on some attacks/ boss behaviors.

I'd like to help. The concept seems really cool with the mech robots

I can't do much more than this:

I have too much stuff to do! I hate time for being so short to do so much!
all I did was fixing the first two mechas attacks, I positioned the black one's bullets so it is interesting (thou I wish I could do more for the attack on the lower part) and for the blue one I replaced his attack (it was made of only one bullet) to a two part attack each side with one bullet, and another one in case the player stays in the middle of the mecha all the time.

also, I would recomend you to make those monsters (which are very big) 8 directional, the animations are nice (thou the red robot walks weirdly) but they turn in a strange way, it doesn't make sense, so it would be beautiful if it had 8 directions.

I couldn't do anything with the red bot because it doesn't makes sense.

all I can do for now, maybe next weekend I'll have time to do some more.

All right, so I've made one pretty cool new attack for blue that almost works how I need it to. But I think he needs a pretty big rework to be a solid boss. I'm gonna give him a lot of slow moving bullets to make dodging his attacks possible yet not too easy, and I'll be adding some animations.

Unfortunately I can't figure out what the problem is with the grenade. Everything seems like it should work, but it doesn't..?

Also, what do you think of the blue robot being able to hover?

Okay, here's what I have so far. It's only changes to the blue mech:

Let me know what you guys think of it.

A few problems I encountered:

-I couldn't figure out a way for the homing missiles to explode on impact with the player. For now, they just softly nuzzle mini mech to death.

-When he shoots missiles into the air and they come down, I couldn't figure out a way for the missiles to detonate into a ring on impact with the ground. As of now, the ring is triggered periodically, but the problem is that a ring also triggers when the missiles spawn (at a random x,y,47 position). I have the magnitude of the first ring set to 0, so they just appear as floating dots.

-Not sure of the difficulty. Is it too hard? I'm concerned it's too easy to kill him by just standing between his lasers, at least until he shoots the first homing missile.

Feel free to make any changes that might be necessary, aesthetic or otherwise.

Great works guys. I will use any ideas you have. I really trust your judgment on this stuff. I can't thank you enough for this. I got to the point in this project that I just wasn't motivated to complete it. I really had trouble with the bosses and then realized that maybe someone would like to help. Thank you.

Should I just start over completely for the final red boss. It's really ok if I do. Or should I just change some animations. I placed the animation outside of the boss because I didn't know how to avoid them overlapping. I can always start over.

Your work on the blue mech is great. If you can't figure out the problems you mentioned I'm ok with what you made so far. It you would like to make a hovering attacking you can, but I know this stuff takes time and I don't want you to get a headache over any of this. The difficulty I will adjust, but other than that I'm very happy with your work.

I love what you did with the first boss, thank you so much. I understand the time issue, so don't worry about the red mech. Either I will make a completely different boss or bugglesman can help me with it if he has the time.

Okay, great! In that case, I'll keep at it without worrying too much about the small details that I mentioned.

I can help with the red mech, too. Did you have any sort of idea as a theme for him? If not, I'm just gonna kind of go crazy and hope it fits.

Thank you for offering your help, but I just wanted a few people to help me. I did this to avoid making anyone feel left out if I choose someones work over an others. If I need your help in the future I will let you know. You do great work, and I have some other projects that I could use your help with in the future.

I don't have any ideas for the red mech, except that maybe when he transforms that a shield goes around him.

ok d, I'm sorry for wasting your time. I don't feel left out, I just think that the mini mech cart will be amazing

Ah as being good with boss behaviors I would gladly help and be of alot of support, but the game keep and keep crashing T_T

What you coukd do tough is take my nautilus robot (a boss I made a while ago) and modify some attacks, he's flawless in his movements and doesn't lagg ! :)