Ack. :( The starting room bug got me, so this can't be played from the BBS list. I'm sorry.

I'm sooowwy for stealin your voxels zep, but they're just so cute!

I want a mage & fox duo game where you have to indirectly guide fox around to solve puzzles while stuck on the other side of a wall somehow... And ride around on a platform that chases you while you're standing on it (letting you guide it anywhere like a magic carpet!)... And there's sooo many other things to do...! If you make the platform jump too, riding it's like a pogo stick!

Even with these so very limited radio buttons and checkboxes, you can already imagine an amazing number of interesting uses if you put your mind to it. :3 And it'll only get better, right? <3

Please do use/modify my characters for whatever. I'll make more after the vital editing tools are finished.

The monster behaviours will start to get a lot more flexible from the next update with the addition of modifiers. Just to give you a quick preview of how they work, here's the current interface for triggering a modifier (although there won't be so many event options in 0.2.6) 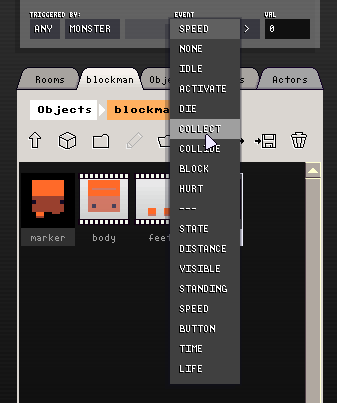 An alternative monster definition ('modifier') can be triggered by some condition. The example you gave of riding a monster around like a magic carpet could be achieved by triggering a modifier that switches movement mode to 'follow player', only when that player is standing on the monster (triggered by: ANY PLAYER event: COLLIDE TOP).