"Oh My Blob!" is a turn-based puzzle action game where you play a knight fighting against a horde of different kinds of blobs.

Arrow keys: Move/Attack
Z/X: Skip a turn (or "start game" in the menu)

Levels 1-28 are complete, 29 needs a bit of adjusting, after that it just ends unceremoniously with a glitchy screen.

I'd love to get some feedback on how it feels, if you get stuck anywhere, if you feel like you're learning how the different blobs work and so on.

It's a puzzle alright. I'm - not very good at it I guess. There are parts where you MUST receive damage in order to progress.

If it's possible to win a level without damage by sheer cunning of the player, that might make it more interesting.

Professional layout, music, and sound effects. Giving this my STAR.

Part of the challenge on most levels is to take as little damage as possible, but yes, in some cases it is unavoidable. On some levels, like level 19, you start with very little health and have to figure out how to complete the level while taking almost no damage: 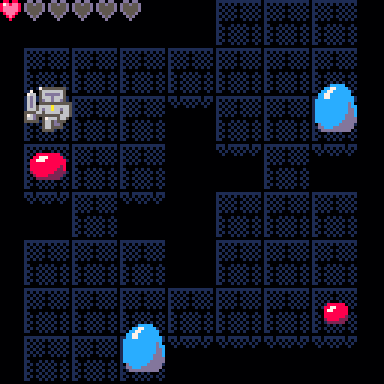 Oh and thanks for playing! =) And thank you so much for the critique and the star!

Update! There are 29 levels now and I've changed the UI around so the hearts don't block the view, and there's a meter showing how much blobbage you're up against: 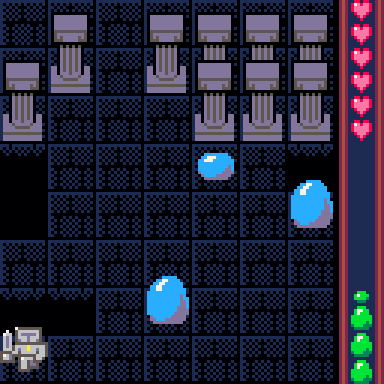 Maybe have the smallest ones move first as the big ones are fat and sluggish ? That might let the player get a whack at the smaller ones first.

A nicely put together puzzle game. Maybe half the levels a player can walk through without needing to work out the best moves, perhaps dying a few times before an okay sequence of moves is found. Occasional levels require a little puzzling out and a few attempts before the routes the blobs will take can be controlled enough - by where you move to on the grid - to allow completion, which makes it a good puzzle game in my opinion.

In the previous version I think I got through all the completed levels except for level 26. With the updates and another play-through, the movement and melding algorithm of the white blobs became clearer to me and this time - with a few level restarts for the trickier levels - I was able to complete levels 1 through 29.

The music is great, it has a good beat and is atmospheric, and the changes for certain levels sound excellent.

Graphically the game is pleasing; the end of level portal and transition are particularly good.

The levels seem to progress in a way that introduces new types of blobs to the player in small encounters. This allows the player to get a feel for how they will react, so when they are encountered with other blobs the player has a fair chance of working out how their moves will complement one another. This gives a nice learning curve to the levels.

There's enough variety of the blobs' actions that it could give replayability value for a while without feeling stale.

Thanks for posting this.

@dw817 Thanks for the suggestion. Changing the movement patterns at this point would probably break most of the puzzles though.

@remcode Thank you so much for your incredible feedback, this is like a professional review! And awesome that you played all the way through twice. =) I was worried about the learning curve, it's such a hard thing to gauge, especially since this is the first game I've made, so I'm very relieved that you commented on it and also just the fact that you completed all the levels.

Thanks again for your comments, you've boosted my confidence quite a bit. =)