This tutorial is part 3 of a series. View part 1 here.

And the end of part 2 we had roadside objects drawn using scaled sprites and sections of the map. 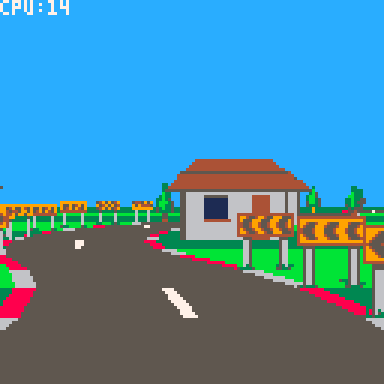 Everything so far has been flat, so in this tutorial we will add some hills and valleys.
This will require solving some overlap issues which we will solve using a clip rectangle "trick", which will in turn set us up nicely for implementing tunnels - so we'll do that too.

First we'll define the pitch of each corner with a field called "pi" (not to be mistaken for the Greek letter and mathematical constant).

This will define the gradient at the start of each corner. So a "pitch" of 1 means the ground rises 1 unit for every unit it advances forward - a 45 degree incline. Likewise -1 would be a 45 degree decline. And 0 is of course level.

For brevity we've made the pitch optional - it will default to 0 if not supplied.

To make the hills and valleys smooth the pitch will smoothly interpolate between values across each corner. We will calculate the delta to add to the pitch for each segment in the _init() method:

The pitch delta is stored in field "dpi" (not to be confused with "dots per inch" - naming stuff is hard).

The pitch affects the vertical direction of the road as it is drawn. We actually already have a "yd" variable which is added to the y coordinate after each segment is drawn. It's just that until now the yd has always been 0, so the ground has always been flat. Now we can use it to create the hills and valleys.

First we calculate the initial value at the start of _draw()

This is the start value "pi" plus the delta "dpi" added for every segment the camera has traversed along the corner.

Then we add "dpi" to the "yd" after each segment is drawn, similar to how we've added the turn "tu" to "xd":

This is all we need to give the road a smooth rising and falling effect.

A note on camera movement

It's worth pointing out that the camera automatically follows the shape of the hills and valleys smoothly, without us having to write any specific code.

This works, because the camera position is skewed in the direction of the segment it is on. Back in tutorial one we implemented the skew function like this:

In particular the "y+z*yd" ensures the camera moves up and down with the shape of the road.

Storing positions "unskewed" and skewing them at draw time has some advantages. Regardless of how the road turns or pitches:

The hills and valleys introduce some obvious overlap issues - sprites visible through hills, far away ground being drawn in front instead of behind.

One approach to fixing this would be to change the road drawing order so that it is back-to-front as well.
This would be a perfectly valid approach (although it would require careful management to incorporate the sprites and road/ground at the same time). 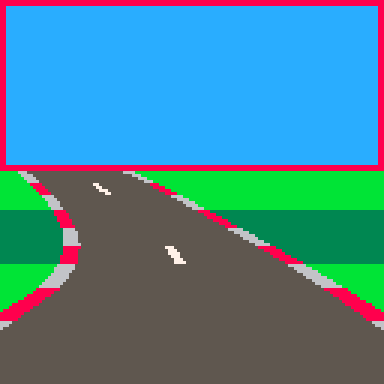 The advantage of this method is that we can continue drawing the road as we walk forward along it. We don't have to change the algorithm too much.
It also reduces overdraw, which was important back-in-the-day on platforms that were fill-rate limited. Pico-8 drawing is fast enough that it doesn't really matter though.

To start with we define the initial clip region before the main drawing loop:

The "clp" array defines the left, top, right and bottom values in that order.

We reduce the clip region after drawing each segment, immediately after adding the background sprites (for reasons we'll see later):

The "min" function ensures that the bottom of the rectangle only ever moves up, which is important for drawing crests of hills correctly.

"setclip" is simply a helper function that sets the Pico-8 clip region for drawing:

Putting this together we get:

The hills are no longer see through, but now the background sprites are not being drawn correctly. The problem is the sprites are being drawn after the road, when the clipping rectangle has been reduced to cover just the sky. We could reset the clipping rectangle to cover the whole screen before drawing the sprites, which would improve things, but sprites would still be visible through the hills.

What we really need to do is draw each sprite using the clipping rectangle that was active when its segment was drawn, which we can do by storing a copy of the clip rectangle in the sprites array.

It's important that we create a new array and copy each of the "clp" fields individually, so that we get a snapshot of the "clp" array at that point. Referencing "clp" directly would not work, because "clp" changes as the road is drawn.

Now we update the calls in the main drawing loop to pass in the clipping rectangle:

Finally we apply the clipping rectangle in drawbgsprite:

With this in place we should have hills and valleys drawn correctly, including the background sprites.

For the last part of this tutorial we will implement basic tunnels. Tunnels give racing games a cool change of environment and they're just fun to drive through.

And with the clipping rectangle logic is in place they're reasonably straightforward to implement.

We'll start by defining the tunnel in our road:

Tunnel corners are denoted by "tnl=true".

I've placed the tunnel section towards the start of the road so that it's quicker to get to for testing and debugging. (It can be moved later once everything is working correctly).

We set the initial value of the previous tunnel flag before the main drawing loop:

Strictly speaking this should be set to the "tnl" property of the previous segment, but it doesn't actually make any noticeable difference for our purposes.

Inside the main loop we compare it with the current segment's tunnel flag, and draw the tunnel face at the start of the tunnel:

Note that the tunnel face will be drawn at the start of the current segment. This means we must use the previous cursor position (ppx, ppy, pscale), as cursor positions are for the end of their segment.

We also need to copy "tnl" to "ptnl" just before the loop ends, so that "ptnl" is set correctly for the next segment:

We will draw the tunnel face by drawing rectangles around the mouth of the tunnel.
We'll start by creating a helper function that takes the projected road position and calculates a rectangle describing the tunnel floor, ceiling and walls. 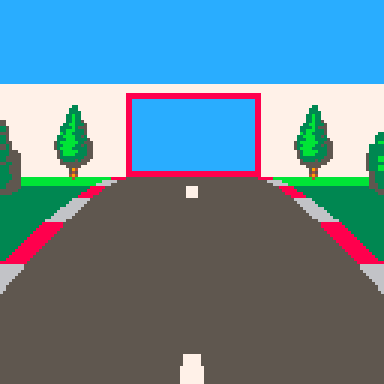 The red rectangle is the "tunnel rectangle". I.e. the mouth of the tunnel.

We're allowing 6.4 units of width for the road, rather than 6, because the red and white shoulder things stick out another 0.2 units each way.
The tunnel will be 4 units high, which is low enough to make the tunnel feel claustrophobic but high enough to be above the camera.

Using this we can implement drawtunnelface: 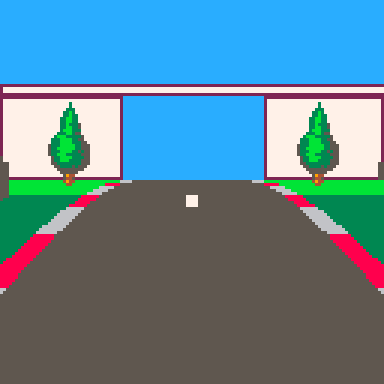 And update the tunnel face drawing code in the main drawing loop:

Now we should have a front facing tunnel wall:

Next we need to draw the tunnel interior. This will consist of the ceiling, walls and road.

And delete the "draw ground" lines from drawroad.

We'll update the drawing code in the main loop to draw the ground or tunnel interior as appropriate, then draw the road:

We draw the tunnel walls by comparing the tunnel rectangles at the start and end of the current segment. 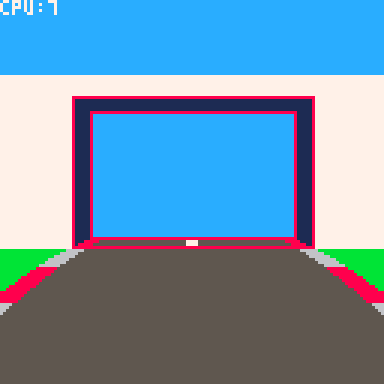 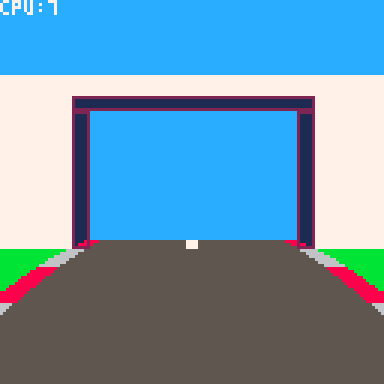 We'll use an alternating colour for effect.

The final step is to update the reduce-clip-region logic in the main drawing loop to handle tunnels.

And this completes our tunnel:

This is the end of part 3. In part 4 we'll add some cars to overtake.

You have really snapped on to this, @Mot. :D
Here is your first star for this incarnation.
Now all you need is an in-code road editor for both players and designers.

Thanks.
Actually an editor wouldn't be too difficult. The road data structure isn't that complex.

Let me know if part 4 onwards will be up and running. I am trying to learn Lua, even if my ADHD sees the learning process as too "herculean" to my current intellect.

You've picked a good platform to learn on.

I have the code changes all ready to go for a part 4. I just haven't done the write up yet - been a bit side-tracked by other projects.
Also I wasn't sure how much of a demand there was to go further.

Hey! I'm new with Lua but this will be one of my first projects when i feel more confident, really nice tutorial!

@equlsa I think I've seen somebody use spritestack sprites in Pico-8, but I don't know how much work it would be. I assume if you can get the sprites loaded in it's just about drawing the slices on top of each other. Drawing them scaled might complicate things a little, but should be doable.

@Mot when will there be part 4? I am anxious o/