PIco3e is a 3D collision engine written in PICO-8! As far with the alpha release, what it does is...

This was the alpha version, in wireframe. It does work with arbitrary rotated bodies and solve the forces correctly. It took me about 3 weeks of learning & coding, and below is the demo cart I've been using it for proof of work.

Token usage: 2873 (with current scene). Thus space is sufficient for some game logic. Unfortunately cpu usage is a bit high, with collision between each 2 bodies takes 5% cpu in 30 fps and doubled in 60 fps. Therefore it's assumed optimal number of bodies is <= 4.

And especially thanks so much to @freds72 without his help I couldn't make this happen.

Aug 13th, 2019. Update with a playable scene and fixed the edge to face collision bug.

Press Z to take a screenshot when the same color faces are aligned to camera.

It's giving me some oddly satisfying feels.

Got a bug at some point. Not sure what I did wrong? 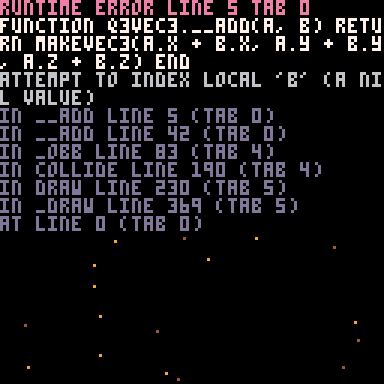 @a2 As of speaking the bug should be gone. If anything similar happened again, please let me know!

I held left for two seconds, then right for a few seconds, and got a crash in the Web player:

I tried to reproduce it inside PICO-8 itself via SPLORE and can't seem to trigger it. Still, this might be useful. Looks like an edge case.