I am trying to make an unmovable actor (for example, a turret). Ie, the actor collides with other actors, but it is not pushed around.

If I set the actor to not collide with anything, it will not move, but it will also not block other actor's path.

If I set the actor to collide with other actors, It will be pushed around. I tried setting the actor's Density, Gravity, and Friction at around 255, but then I have this weird behavior where if the player
touches the actor, the actor will move 1 voxel TOWARDS the player.

Am I missing something obvious?

You can use the lock axis checkboxes: 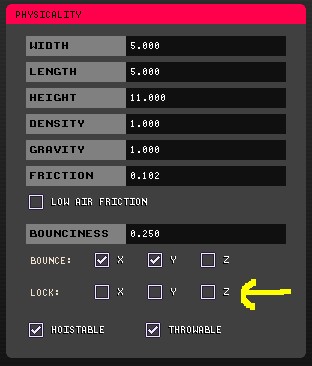 Turns out I WAS missing something obvious! Thanks @zep!