Some helpful excerpts from A WORKER'S GUIDE:

"Space Spiders...can be frozen or unfrozen with your Freeze Ray." (pg. 13)
"Space Larvae grow into Spiders instantaneously when frozen!" (pg. 17)
"...Larvae are scared, but Spiders are very curious." (pg. 18)

Made (way behind schedule) for #7DRL 2018
By Tom Brinton
@brintown

Nice gameplay - the music fits well with the theme!

Note: I found the "aliens" a bit difficult to identify at first glance (though it was a chip!)

Yeah, they do kind of give a Chip's challenge vibe. maybe i can tweak that sprite! glad you enjoyed it

My only true complaint is that, frankly, the aliens are jerks. If I had a dime for every time an alien moved into an area that caused that path to be inaccessible, I'd be rich.

@floman any ideas on how I could make it more engaging?

@MineRobber9000 to me that is part of the fun. You have to sort of lead the aliens around.

I think more alien types, one more power, and also making it harder as quickly as possible.

Maybe make a level 1 where you are forced to freeze/unfreeze and hatch a larva so we understand it immediately. Then straight into the challenge.

Also maybe a level selector to skip to harder levels?

The most fun I had was where I really had to think hard about each step, or risk getting trapped. I love when I'm forced to make a tough decision to freeze spiders who are about to surround me, even though it will mean converting a larva. There were also some really interesting scenarios where a doorway was blocked by a frozen spider, but unfreezing it had undesirable side effects.

These experiences only started to happen after a handful of levels, so I agree with floman that the levels could get harder much quicker. I almost quit after a few levels thinking I understood what the game was about, but I'm glad I persisted!

The levels are quite large and sprawling, but the gameplay doesn't seem to benefit much from that (the gameplay in most rooms seems like it could happen in any room). I wonder if having less levels, but making them smaller, and more environmental (obstacles, doors, widgets?) could be an improvement for a sequel? :) I understand this would be a fair bit of work!

Floman's suggestion of additional element(s) introduced later makes sense to me too: something that interacts with the other two enemy types in an interesting way.

Anyway, congrats. This is really great, thanks for sharing.

PS. I doubt you've played Daleks, but Alien Tamer's contracting, turn-based gameplay reminded me of it (although Daleks is not a very good game, to be honest!) 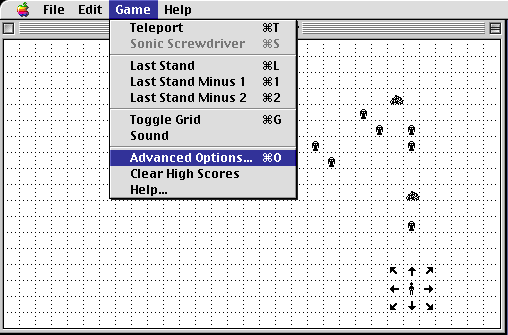 thanks for the feedback @aaaidan. those are great ideas that make me want to revisit this concept with some better skill ramping and a more interactive game world!