I want to add two more enemy types to 'Bobs Adventure' to add a bit of variety and a sense of progression to the game so that when you come across something tougher, you know you're getting closer to the end but I can't decide what these two types of enemies should be. 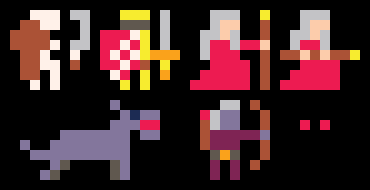 Option 1: Skeleton
A Skeleton. I guess the skeleton would be tougher and do more damage than a zombie. They could even keep getting up after you kill them which would be kind of cool in a room with difficult platforming

Option 2: Gold Knights
Prettymuch a copy of the player. These guys would be in the last section and would be pretty darn tough. I would have made them Black Knights but It would be too awkward to make them stand out against the background tiles.

Option 3: Zombie Archer
I like the idea of having a ranged enemy. Several ranged enemies in a room could become almost like a puzzle to avoid the shots and they would play so differently to the normal zombies that it would add some good variety.

Option 4: Pyromancer
These guys would be functionally identical to the zombie archers, really but I think the archers would be in large quantities and deal less damage whereas I feel a wizard should be really powerful but not that numerous

Option 5: Spectre
Having a ghosty floating around as just a pair of red eyes would be kind of cool, since my background environment has the red eyes shown, so the real spectres might be harder to see. These guys would basically be invisible and float around. Maybe acting like a Boo in Mario games, where they only move if you're not looking at them

Optiong 6: Zombie Doggo
My least favourite option. I'm not happy with how the sprite looks and I don't think I could animate it very well. It also takes up two sprites so there might be a memory concern...

I think roughly what I want is "projectile dude" and "tough dude" in some form.
So these are my ideas so far. If anyone has any thoughts on which of these might be better, or a suggestion of something different, that'd be great^^

Actually all these characters look great !

If you have the space, why not code them all ?

I'm doing okay for code memory but I've only got about 16 sprites left, if my boss (a 2x2 sprite) has no animations. which he might not, to be fair. I might just give him lots of magical attacks, or something.

I don't think a zombie archer would walk. I think he'd just flip to face your screen direction. He could use the death animation from a normal zombie too, I guess. So zombie archers would just be like, one sprite for him, one for his arrow...

spectre would just be one sprite...
I think the knight and skeleton might be an issue, sprite-wise though :(

Yeah, I've just drawn up some sprites for the skeleton animations, gold-guy animations and a zombie archer stood still. I will probably save a sprite by just using pset() for the spectre's eyes, too. No zombie dog though, probably.

8x8 for the most part. Stuff like death and attack animations for the player are 16x8

Where is your cart ? URL. Maybe I can look at it and see something that would help.

I think I've got it sussed now! :D I can do archers, knights and ghost, for sure. Probably skeletons, too