I made a retro style box art for the amazing game Mistigri in the free, open source application GIMP. I wanted to mimic the old school Nintendo black box games. You can view the large faux box art here:

I am considering making a few video tutorials to show other users how to do it. Is any interested?

If so, I could post a few videos in a couple of weeks. I would be curious to see what others design. Maybe someone could make a template, so it is easy for everyone to make consistent covers. 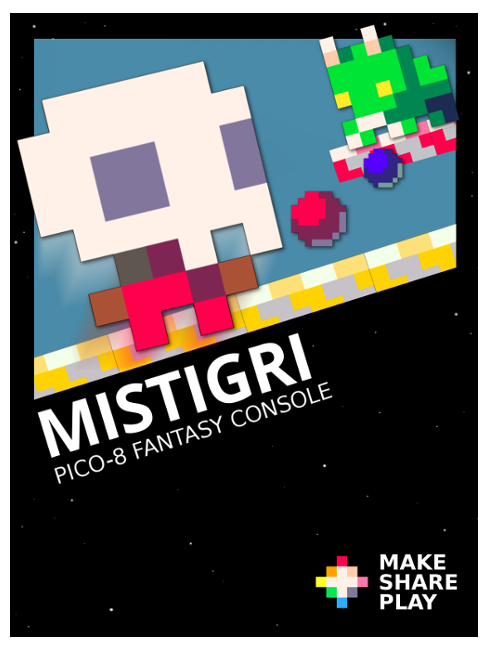 Go for it! The more cool stuff we share, the better. And honestly, this style of requires no extra artwork, which is great for people who want to spice up their cart releases, but for whatever reason can't get hold of traditional looking artwork.

I would however replace all the pure white in the cover, with Pico8 white(#FFF1E8) and maybe experiment with the font, as the game title looks really stretched vertically. Maybe find a different font, something more blocky and modern?

I plan on doing a template from the cover of the Kid Orion box art and sharing it with the community. The more stuff we make for Pico8, the merrier.

That Kid Orion cover is gorgeous! A great template to work from.

Yes, the pixel art style is simple. You can use your existing pixel sprites. Sticking to only colors from the PICO-8 color palate is also an interesting suggestion.

It would be cool to compile a nice catalogue of all the PICO-8 game covers. Something like the preview images from this:

If the cover initiative catches on, I would be happy to make a book like that and release it under Pico-8 Zine model (free pdf +limited print run).

Very cool! I dig it...that Kid Orion art is bitchin' - personally, the old Atari box art is the ultimate win and I can't wait to get that art book when it goes on sale in October.

I like the cover, but not sure about the drop shadows of font choice.

Maybe it could include a QR code to the URL of the cart?

QR code to the cart/place where you can play online is an awesome idea! I am stealing that ;)

this is an awesome idea! however i feel the pico 8 box art should be less NES and more it's own thing?

QR codes is a great idea as well!

Yes, Pico-8 should have its own look (not just mimic NES box art). That Arari box art book looks great too. I like Activision's Atari boxes the most.

I have been playing around with a new style. I will probably still make some changes. A large version is here. 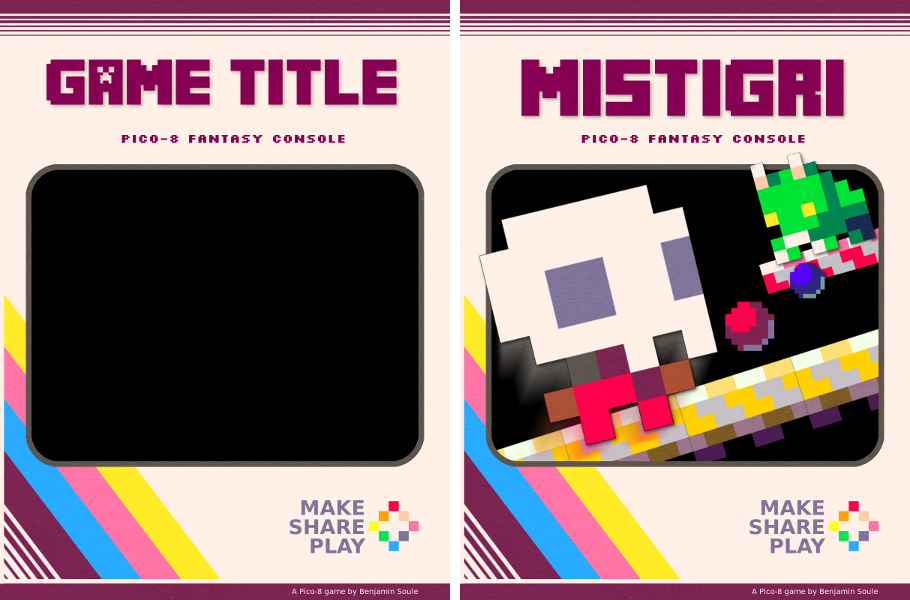 I like those a lot! Especially the "rainbow." I was planning doing something similar...borrowing heavily from activision as well ;)

BTW, what is the font you are using for the title?

It would be cool if the box art could be generated using sprites from the cart. User uploads or chooses cart and then chooses or customises a layout template. @colecobug

@Level27Geek, Thanks! Yes, the stripes are inspired by Activision's and the pixel art from Nintendo's black box series. Hopefully it still feels like its own design while maintaining a retro feel.

﻿The font is MineCrafter 3: http://www.fonts2u.com/minecrafter-3-regular.font

@matt, when I have a final template I will release it for everyone to use. Just drop in your pixels art and type a title.