-Arrow keys to move to the next room or navigate the shop.
-Z to block or purchase items.
-X to attack or exit the shop.
-Z+X to use special items.

You must delve into the endless dungeon whilst defeating monsters and collecting gold. Gold can be used to buy health, weapon upgrades, and special items. The shop will appear every 10 rooms.

When in combat you must choose to block or attack. After your turn, the enemy will attack and there will be a random chance you will be hit. The enemies' health and hit chance will increase after every shop.

You can also use a special item. You will start out with the 'run' item but other items can be purchased at the shop. Special items will have a cooldown after each usage. Here is a list of all the special items:

-'Run' allows you to escape an encounter.
-'Defence' gives you armour (indicated in the top right) and will protect you from the next hit.
-'Bomb' will give you a damage buff.
-'Full heal' will give you full health.

When you die your run will be over and you must start again from room 1.

This is an endless first-person dungeon-crawler made in Pico8. This is my first time making a game like this so feedback is much appreciated.

You find yourself in a seemingly endless dungeon. You are lost and have an urge to just keep going deeper. As you go deeper you start to encounter ghosts, skeletons, and other monsters. Maybe they're defending something? Maybe if you go deep enough there will be an exit?

After gathering some feedback I have made the following changes:

-There is now a small chance that you can encounter a friendly NPC that will either heal you or give you gold. This
will be influenced by the direction you have travelled in.
-To make the shield seem more useful I have changed the special item system to require you to block with your shield
before you use it.
-I have also changed the special item system so that you only use X instead of Z+X to use special items. This
addresses the issue of some people finding it difficult to press Z+X at the same time without accidentally
attacking or blocking.
-In the shop, you now have to navigate to the exit using the arrow keys instead of pressing X to leave.
-I have also fixed a bug where you could over-heal by purchasing more lives than you had max hp.

In the future, I would like to make the combat less luck based. Originally I had planned to give each enemy an attack pattern and so I might try to implement that in the future.

New music would also be nice to add as the current song isn't great and it gets repetitive fast. 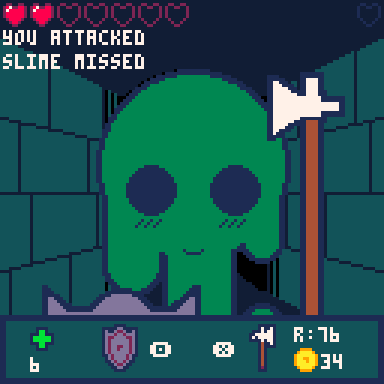 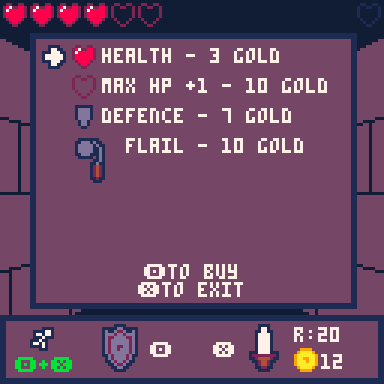 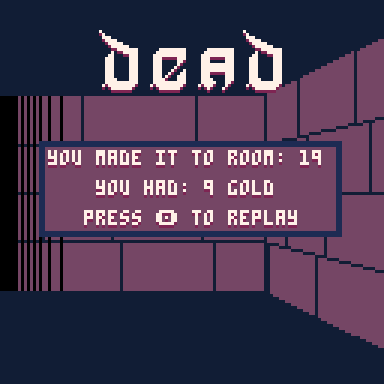 Very nice artstyle! I did read your instructions in the post,but the game did a good job explaining itself. Nice work! Made it to 115 with max hearts, a poleaxe and Full Heal before my luck ran out. Love the enemy sprites and the bit of decision-making with fights and shops was nice. Not sure what the purpose of defending was besides delaying fights so I ended up never using it.


It would be nice if there was a bigger time window to activate items cuz it seems you need to be frame-perfect, and maybe a Y/N confirmation box to prevent accidently leaving stores.

Cute graphics! Neat that you were able to do everything with draw commands.

Echoing what Verb said: I didn't really understand what the shield was supposed to do. As far as I can tell, it's no different than a "skip turn" button: it prevents the enemy from damaging you, but it also prevents you from damaging the enemy. I can't think of a scenario where deploying my shield would help me win an encounter.

I also wish the navigation directions mattered to the game. Right now they're just flavor because there's no meaningful choice (e.g. turn left to get to a shop sooner, turn right for more gold).

@Verb @cmounce thank you for the feedback! I agree the shield is kinda useless. Originally there were going to be attack patterns for each enemy but I couldn't get it working, unfortunately. Maybe I might tweak the special item system to work with the shields (maybe make it so that you can only use them after you have blocked).

For the shop, I might make it so that you have to navigate to the exit option via the cursor.

I did initially plan to have a very low chance of finding friendly NPCs that will heal you or give you money so maybe I could implement that and have it be affected by the direction you take.

Very cool game, it really shows the effort you have put in it. But it really depends on luck when it comes to battles. Maybe it would be better if you'd be able to beat enemies not by pure luck, but by wisely using your abilities (maybe some rng involved too, but not this much)

Made it to room 169 this time around, and rooms past 100 fairly consistently :)
My strategy:

Upgrade your weapon whenever possible, and buy health upgrades while they last instead of hearts as they restore your health to full. Get the Full Heal ability whenever it's most convenient.

Unless you're near full health, try to use the Full Heal ability every 5th floor's encounter (after the 1st strike at floors 100, or 2nd strike past 150) to let you (hopefully) reach the shops on every 0'th floor to heal up, and so the ability will be available for the next 5th floor. Also pray to the RNG gods for no double wizards.

Fun game: I do feel like there needs to be a more discernible strategy to combat, but this is a great start and very polished already!