bruh do i rlly need to buy pico-8 just to play this game?

Well, you can play the browser version on this thread without owning PICO-8, but to download it, yes, you'll need PICO-8.

What's this I wonder?

We have officially entered the realm of extreme token saving wizardry. (i.e. using incomplete compound variable assignment to set multiple values to nil, to be treated as false. Yeah. THAT far)

can i make a new version of this, just with split screen co op? but without the mouse support tho

@cubee i'm not sure if this would work well, but maybe for mouse mode have E be jump? i think rclick is a bit confusing (although that's probably cuz i have barely played with it) but also it doesn't really work on trackpad
not sure if changing E to jump would break anything that i can think of, since arrow keys still work

I did have E as jump at one point, but I think I removed it due to the token limit. I'll see what I can do to get it back, as the code to allow multiple jump buttons is already there.

Go for it, just obviously don't claim it as your own and all of that. It's got the Creative Commons licence for a reason.
Or are you going to rebuild it from scratch?
Either way, I'd like to see that.

This update is tied with 1.1b and 1.2.1b for the smallest update, with only one change note.

@cubee sorry, my parents said that i cant have pico 8, so you may have to do it, but all you have to do is make a new cart, copy the original, perform the token saving wizardry, remove mouse suppourt, and add 2 controller suppourt with two character import options and splitscreen

however i might be able to do this in scratch, and add cloud multiplayer, like the original terraria,

edit: nevermind the cloud multiplayer, that would ruin the "old timey" aspect of it, but i would also make the sprites in the game 16-bit instead of 8

Ah, well, in that case just give credit for what you use and link back to the game in the description.

I probably won't finish this, but it's been a cool experiment so far. I had to cut quite a few things to even get a second player to a barely working state, let alone with their own entire screen.
And then there's the problem of the second player not having a pause key.

It's hilariously broken too, though many of these should be easily fixable:

Alright, well, it's seeming to be more doable now, though saving still isn't a thing.

(By the way, this is NOT going to be part of the base cart, unless something major happens with PICO-8 and I can magically fit it in somehow. The base cart is right on the edge of possibility as it is.)

There's quite a few quirks as of now:

If this were to be released properly, I need a few things:

I may end up releasing it as a tech demo though.

edit, its fine if its a tech demo for now, but pls release it! ive been wanting to play with someone!

OK, do you plan to play by sharing a keyboard or with two controllers?
Because I have an idea for how to separate the pause keys using the keyboard and another idea for using controllers, though controllers would require the use of PInput which is a separate program you run to add support for more controller buttons.

I really don't want to release it if the two players have to share a single pause button, I tried it with my friend and it was really annoying.

It's still a little bit weird, but I've fixed a lot of the issues.

I've mapped player 2's inventory key to keyboard T. The way this is implemented means it'll break if caps lock is on, so make sure that's off.

i could do it either way, and i like the multiplayer update!
btw instead of making a scratch game, im just gonna make a book. :)

its been amazing seeing this game evolve into what might be the biggest single cart game in pico-8! if you're still looking to add some smaller "bonus" things, may I suggest an idea I had a while ago that I call 'expansion carts'

You can summon Ocram in the Corruption at night time.

Because of the block you're standing on changes the biome, you can add 1 corrupted grass near your base and summon him while standing on it. :-) I found this out a while ago and it is a quick way to boss rush Ocram and Plantera.

will you be adding anything else to this game I know you've compressed it basically to the max but do you think you can add one more boss/biome like eater of worlds or brain of cuthlue?

No, I don't think I can fit another boss or biome in. Sorry!

I added a section in the main post that tells what the mobs drop, also a trivia section as wall.

@cubee i created a discord server for you @cubee You think that's a good idea? link serve: https://discord.gg/qZ5yujrgMa

I don't mind, but please don't call it "official" without asking me first. Otherwise it's unofficial.

Also, the invite seems to be invalid. (expired?) 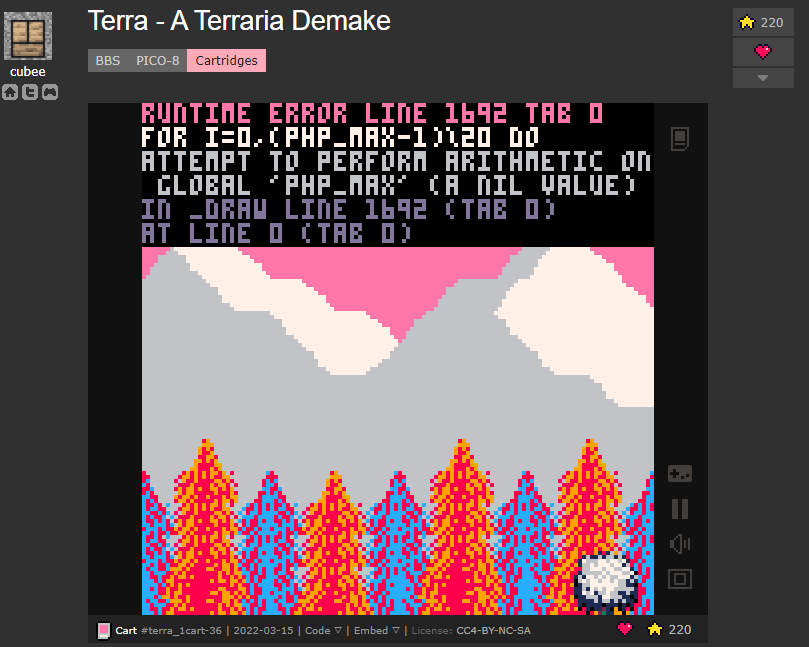 bro why :( i not can't drop word and player

@cubee you can't help me

@paulo_gamer
could you show me what the start of your player save file looks like?

Excuse me.
How to spin the weapons' sprite?

What do you mean by that? 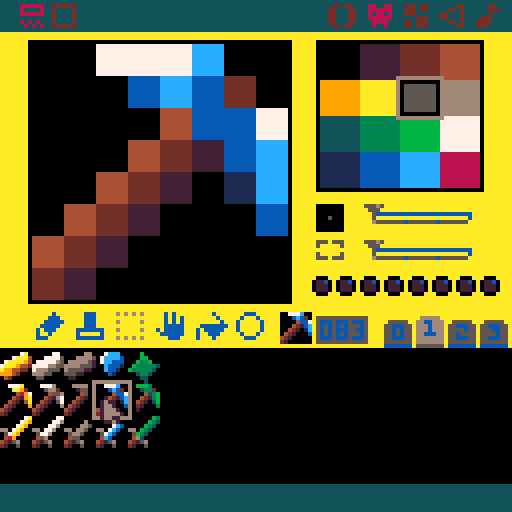 I drew some sprites about the weapon, but I don't know how to make it spin when attacking.

You can find the rotated sprite function I used here:
https://www.lexaloffle.com/bbs/?tid=38548
or copy my slightly modified version from tab 3 inside the cartridge if you like.
If you use the one from the top of the linked page, you'll have to find the rot_coord() function from the R-TYPE cart as well, or use a different one from further down.

What I did was set the map tile at position (1,1) to the sprite surrounded by empty tiles, then drew it using:

You can optionally provide flipx and flipy to flip horizontally or vertically, not sure if either of those work correctly but they at least worked for Terra.

@cubee can i have permission to se the terra items sprites??

also how can i find or craft a musket???

If you go to the recently released https://pico-8-edu.com and type load #terra_1cart you can look around as much as you like. The colours will be wrong though, because Terra changes them while running.

And to get the musket, it drops from the third Shadow Orb. There is an issue with saving where if you reload the world the Orbs will start again from the Shade Bow, so you can try loading your character in a new world to get it if that's the case.

@cubee can i make a game through pico-8-edu.com???

Yeah you can use pico-8-edu to make games. I'm not sure if they can be published on the BBS though.

And for getting the musket, you can load your character, and make a new world instead of loading a world save file.
Then just go break all 3 shadow orbs to get the musket and only save the player file.

If you run the game, pause, and type:

and pause again, than you can see the right color of sprites.

By the way, thanks a lot to @cubee for teaching.