I was checking a suspicion of a regression in version 0.2.0c and discovered this minor inconvenience. When a newer version cart is loaded into an older version PICO-8, it errors out with "Could not load $filename". Technically, it's correct, but the same error is shown when, say, a given cart file is missing. I find this messaging confusing: it took me a while to realise that the file is fine and it's the version mismatch that causes it.

Suggestion. Make it forward-compatible: error out with something like "cart version unsupported".

(FWIW, I was trying all this via command-line)

Bonus small bug: non-lower-cased message word "Could" is rendered in the puny font, while the rest of PICO-8 UI does not use it. 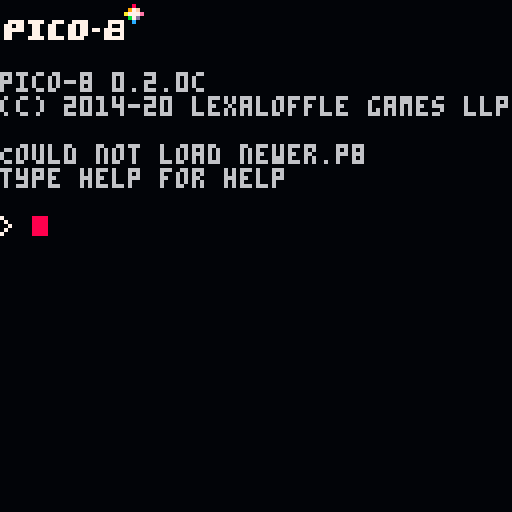 Changelog for version 0.2.0 lists, among other new operators, these three: "@ @@ $". However, I cannot find and mention or description of them in the pico-8.txt user manual, including manuals up to version 0.2.0c. Consider this a documentation "bug".

P.S. I cannot get single backticks to work here on BBS. Instead of formatting in-line code, they format the whole block (so act as if they were triple backticks).

I've found out that stop(nil) crashes PICO-8. Not that it's a particularly useful call, but it definitely must not crash the console.