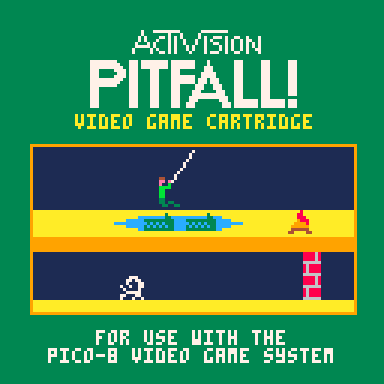 My third complete cart and most ambitious.
Wouldn't be possible without Pico-8.

Attempt at 2600 Pitfall. Tried to get graphics and timing as close to original as possible. All 255 screens are here with he exact same layout of ladders, pits, alligators, treasures, and so on.

The Game is missing ?!

Struggling with the post/upload system. Hmm.

Should be there now.

thanks for this! just as infuriating as the original, love it!

As someone who played Pitfall on an Activision classics plug-and-play system, this is so very close! The jump-air-land curve can use a bit of a change, as I remember the air time being a touch longer, but everything else is PERFECT! My experience may have been different since, y'know. Plug-and-Play system. But this is still really close to the original!

Thanks Snowfall. I had a 2600 emulator running and spent a lot of time tweaking timing and looks to try to nail it. I'm still think something is wrong with the player sprite movement. I captured every frame and kept working it but it still looks off and I can't figure it out.

Anyway, so glad you like it. I was hoping it would make the featured list but alas. ;)

This is surprisingly accurate! I hope you can do more Activision games like Spider Fighter, Plaque Attack and MegaMania. Let's not forget River Raid.

Thank you. Not familiar with Spider Fighter and Plaque Attack. MegaMania and River raid could be good ones to take a stab at. Currently working on Lode Runner which I think is coming along really really well.