However, not in Android. 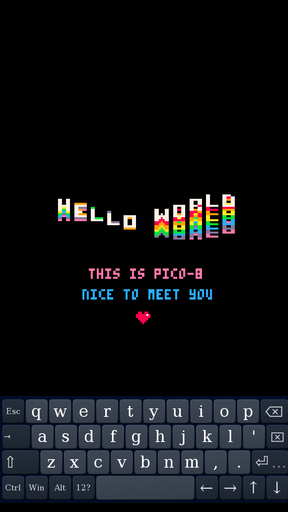 Keyboard is the linux 'onboard' program, set to run on top of all other windows.
(Screenshot is resized, otherwise it would be absurdly huge due to my DPI)

well done!
I tried to do the same on my phone, which is running an x86 version of linux + android. But when I start it, it just does nothing, no error, but no display. I wonder if it's not because I'm using a remote X11 server...

Hey thats cool.
Now wish there was a pico-8 app for android.

Yeah PICO-8 doesn't seem to run at all using X over VNC or XSDL, hence why I went to a full blown Xorg server

And also you really don't want PICO-8 for Android :P, atleast not for development. It's a bit annoying trying to use it with an on screen keyboard.

Hah, yea i was mostly thinking about playing some of the games :D
Coding on a touch screen is probably even worse than trying to play something fast paced.

@burymind it's not an apk, it's running a native Linux (probably in parallel with android), with the Arm binary of pico-8

And yeah it was running native Linux, I could get it working in parallel with Android but doing so basically involves killing Android's userland so that the chroot has full access to the screen.

Gamax, I would contact ZEP and let him distribute your version to other Android users who have purchased PICO already.

Not to sound like a government agent or anything but ...

"You would be doing this community and country a great service."

No. The thing about this thread is that I got it to run on my phone.

It doesn't run in Android however, couldn't get it to show up with XSDL or X VNC, barely works in half Android with no audio and wrong colors (kill zygote and SurfaceFlinger to free up /dev/fb0 so SDL can have direct screen access), and ended up resorting to a full blown Arch Linux ARM installation on the phone (no Android at all) which also has no sound but allows me to have an onscreen keyboard to make PICO-8 playable. Playing on that was awful.

Releasing this would be like telling someone that they need root, and to download a super huge archive containing PICO-8 and an entire debian chroot and telling others that they can't use it and other Android programs or anything Android at all at the same time.

So if you want PICO-8 on Android and an actually functional version that doesn't involve killing off all of Android, zep has to compile that himself. I don't see why though, unless you have a physical keyboard, using the onscreen keyboard is absolutely awful. It was hard to play anything using onboard and also hard to play anything when I forced Android keyboard in picolove. picolove's touch screen layout still is somewhat awful feeling.

(Also zep has never responded back to any emails, and I lack twitter)

As for the Android, not cut and dried then ? A shame ... Maybe someone else can get it working easily.

That keyboard you showed above doesn't seem so bad. I've been going pretty strong at it for the past 3-days and need to take a break, but I'm still working on this - hopefully finish it - now it seems, by Monday evening. 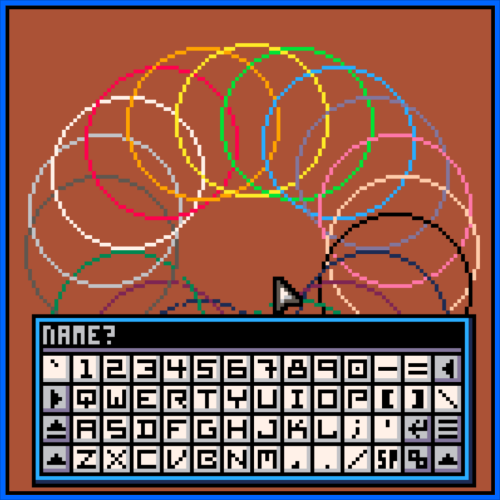 Has upper and lower-case, and yes, it returns strings with true lowercase letters. Try this program to see a few of them in standard output.

Sorry for the necromancy. At least the body is still lukewarm. What ARM Linux binary? The only one I've seen is for Raspberry Pi, which won't work on other devices because it's linked to the broadcom library.
If there was a generic ARM linux binary that used SDL or something that would be nice. Personally I'd like to run PICO 8 in Armbian on my Orange Pi PC. I have Raspberry Pis and it runs well, but being able to run it on more devices opens up more possibilities.

the raspberry pi version has a pico8_dyn that I can run since it links to system libraries instead of including everything, and this was done on an old version where it didn't link to libwiringpi or whatever it's called, though iirc you can easily just remove that dependency and then patch the gpio stuff

You may also find that if you try this it run like absolute garbage, to fix this I use: SDL_RENDER_DRIVER=software

Hi,
I have experience with building sdl2 apps for android 4 and 5 for several years, I maintain several tools that I use daily ;
I offer to help setup a dev environment, I can also do QA .
Since the source is closed we could agree on a simple test program that tests/runs all dependencies like lua and sdl 2, and the author could then drop his code in place when I pass the environment to him ( maybe as a big vm image through dropbox ).

Honestly I did cross compile some command line tools like ffmpeg and python2 to android, and I use the terminal emulator all the time; most people type with 2 fingers anyway.
Also I had lots of fun using AIDE to do small libgdx games on the tube , so I think development on android is viable and fun in some contexts.

I also have a couple of android 2.3 motorola fire that have a keyboard and that are on a level of performance equivalent to a pi 1B , I'm pretty curious to use that .

I see my kids having fun with pico 8 on pi and netbook, but android would make it even more attractive to them.