(I am very aware that this is almost certainly a very stupid question, but if you don't ask...)

Does anyone know if it is possible to take some string content and convert it to functional/executable code in PICO-8/Lua?

[BACKGROUND]
I have LOTS of objects (tables) that all have their own, unique functionality. So unfortunately, there's little potential for sharing data/functions.
For example, many objects like this:

But as I don't need all these objects to exist at the same time (and could REALLY do with saving some tokens!), I'd like to somehow store these objects + functionality, e.g. within strings.
Then at a later time, restore these back into true objects/tables again.
Something like...

I've seen similar potential methods of serialising/deserialising from strings - but at best it seems all I could store would be simple object properties (strings, numbers).
Whereas the real benefit for me would be if the whole object (or at least the object's functions) could be string-ified.

Again, I'm pretty sure I'm asking for the impossible, but if anyone has any suggestions that could help - I'd be very grateful to hear them!

There is no way to store Lua code in a string and have it interpreted directly by the Lua interpreter in Pico-8. (Full Lua has a loadstring() function but Pico-8 doesn't support it.)

If it must be a string, your only choice is to write an interpreter for the string format that executes some behavior encoded in the string. You probably don't need all of Lua to do this well when needed. For example, you could encode an enemy walk path with conditional branches using a simple sequence of characters.

You might benefit from other code organization techniques. Prototypical inheritance, closures, and coroutines are all ways of using and composing function objects for code reuse and describing behavior succinctly.

Thanks Dan, will certainly check out those links.

No, it doesn't have to be strings - I just figured that was the most optimal way to store it as a bulk of code would only take up one token (in theory).

Also, thanks a BUNCH for your PicoTool. It's been a complete LIFESAVER for my project.
For example, un-minified, my current code is nearly TWICE the compression limit and also near the char limit. After luamin, both of those values are almost halved.
(Would be even better, but I'm deliberately adding "exclusions" for public API functions and properties!) 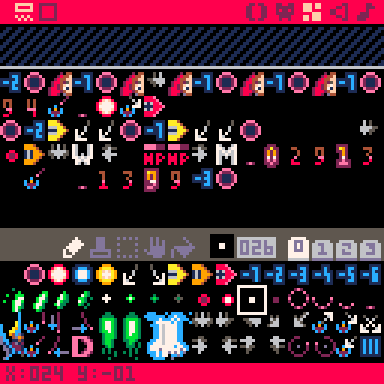 Hi,
May be this could help : search for "i_core" and "i_editor" in this forum.
Kind regards,
jihem