As a spinoff to TTF fonts by @RythmLynx, I created some bitmap fonts (in various typefaces) because I could map them to both OEM and Windows 1252 (which also includes ISO 8859-1) for use in text editors. I have FON font files for only Windows right now (until someone converts them to the Linux types and tests them).

UPDATE: DejaVu TrueType fonts have been added to the collection. 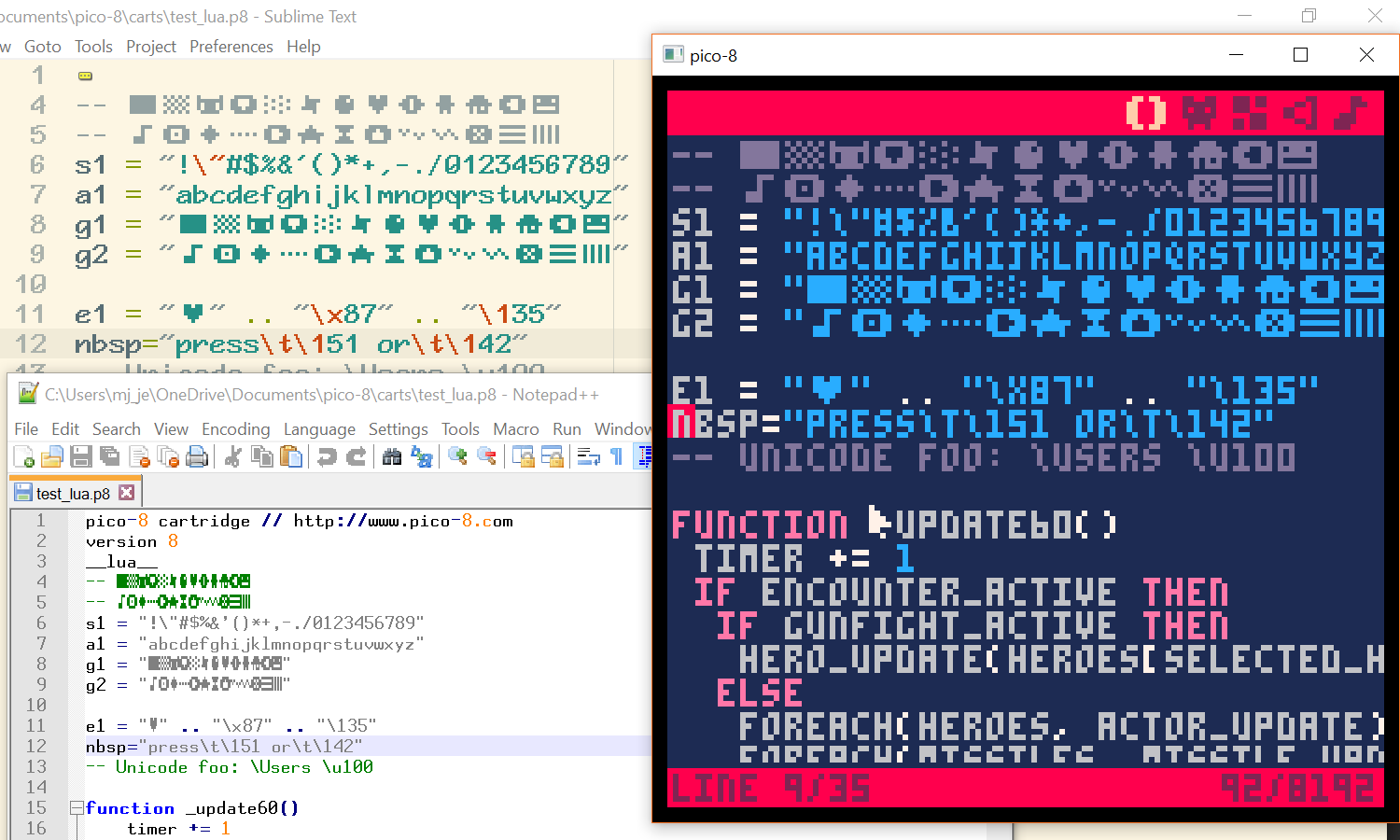 Screenshot of the same p8 file open in Sublime Text, Notepad++, and PICO-8.

Fonts and more details on the Github page:

is it possible to mix bitmap & regular font characters? (like using DejaVuSansMono + the pico8 pixel icons)

It is possible to modify DejaVu Sans Mono similar to what I've done here with bitmap fonts. That is, wipe out all other extended characters and put in PICO-8's extended characters. They could be drawn bitmap-like or fancier. Up to the artist.

This is something I mention doing on Github but I, personally, have no immediate plans to do it myself. This was a distraction from my other projects. Maybe after I finish one of those other projects... or get bored again.

I do like the idea of modifying DejaVu since it is open source and can be published directly (instead of via patch). Hmm.... Dangit. Trying to not get distracted again. Maybe just one TTF to show the way. We'll see.

Aaaargh! I had to do it. Bugger! Anyhow, the DejuVu TTFs are now done. No more good ideas to distract me please.

wow you edited all the variations of the font? o_O' great work! thx!

so if you used those special characters in pico, you will see them in your regular editor if you use those fonts, right? but how come there are capital version of the characters? Isn't R the right button icon in pico? i'm confused.

I edited only the four weight variations of DejaVu Sans Mono. Times the four variations needed by various editors (OEM vs not, monospace vs double-wide) and you get 16 fonts.

Yes, as the screenshot of the bitmap fonts shows, the same is also true with the TTFs. What you see in the PICO-8 editor, you should get in your other editors, as long as you set the file encoding correctly and choose the correct OEM/non-OEM version of the font. It's up to you to figure that balance out should you choose to use an external editor.

As far as Shift+R = Right Button in the pico editor, that's just the programming of the editor to change R (\x72) to Right Button (\x91) for you. Some other editors, I'm sure, could be programmed to do the same thing should you want to.