Short adventure game with unique talking mechanic with focus on exploring and talking to NPCs. Meant to be played several times to learn the world and find clues. Game have random elements to throw player off from obvious resolution.
As it was my first released game it isn't very player friendly and is very obtuse in what it requires from you.

INTRO:
You are one of many bounty hunters that is after Maggus, the royal mage, after you found King will pay handsomely for this task.
Allied mercenary lead you to enclosed, old, valley mine, where Maggus could hide.
This is your chance, there is only one exit from this place and your companion is guarding it.
There is only one catch, you have only two days - King will pay three times more if you deliver your bounty within specified time.

Any feedback or just sharing your experience is encouraged.

String data storage, and functions for those, based on this post.

This is excellent! The NPC interactions and dialogue are great, and the karma system is a nice touch. I've yet to beat the game, but there's some indication that there are multiple endings, which is awesome. I added it to my favorite games list. If you have any requests for changes/additions/removal on there, let me know via Twitter (@clowerweb).

Sad to say, there aren't multiple endings, only multiple variables that are taken into account when counting your score and showing summary. I was forced to cut several features, as I overestimated possible scope in Pico8... So you may encountered some loose ends of that.

Indeed I was planning different endings (more on that in post mortem), but as I was constantly fighting over having no space left for anything - this was one of the things I decided to short. (In non-minified version I am sitting at 8187/8192 token count and 65227/65536 char count. :o)

I am honored to be on same list as other great titles and I am relieved you find this title interesting and fun(?) as I wasn't sure until very end if anyone, who wasn't developing it, would be interested in that.

I really like the jarring colour combo and the character animations. The dialogue sometimes get cut off by the camera placement. Looking forward to playing some more.

Thanks. My top priority was to make graphics to be readable, with this color pallete, but nice to see someone appreciating it. :)
I think I pushed too hard with some of dialog lines where I should just cut them in two - as breaking to new line EDIT: wasn't looking good.

Be sure to write more about your experience as you play!

I really like this. The interface—and the sheer ambition of it—remind me of that old Psygnosis game, SENTIENT.

Wow, what a compliment. I didn't play Sentient, but as I read about it from your link I feel flattered by this comparison. Now I need to find a copy and play it, thank you for telling me about this!

Wow, this game is beautiful. The sound design is incredible, great music and I love the talking sound.

It's really cool that you've built a platformer around conversation. The dialog mechanic is very satisfying. It's interesting that with a relatively small set of phrases, I can get a sense of each character I'm talking to, and project motivations and feelings onto them. The world feels very alive, and this gives the characters a lot of depth.

I haven't beaten it yet, but I'm definitely looking forward to exploring this game more!

One quick note: at one point I fell off a ladder and got stuck in the ground. I'm not sure I can reproduce it, but I'll attach a screenshot just in case it helps... 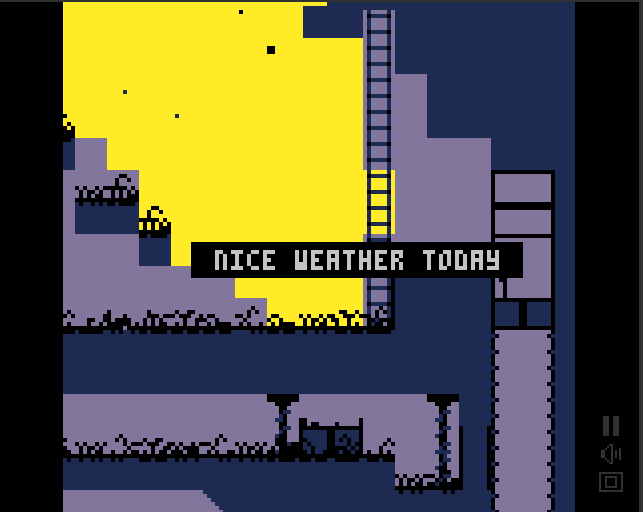 Thank you, I'm happy you had good time with it. Nice to see someone appreciating music, it was my first attempt at this type of composing, as I play guitar mostly.
Please, if you play more, be sure to share your experience.

Also thanks for bug report, screenshot was crucial to reproduce it. Looks like this happens if you gain enough speed, when falling, and start to climbing as you are about to hit the ground. I will fix this as I get free moment to do that, but I can't promise I manage to do this before new year eve. For now, if you use ladder to slow falling - just let it go sooner and everything will be working.

love the asthetic! Also, I'm having a bug, at the beginning if I try to go down the ladder, I go down about a pixel and get stuck, I eventually got around it by jumping off the cliff, but when I tried to go up the next ladder I couldn't get to the very top, seems like some collision bug with the top of ladders.

So I broke using ladders with this update. I am sorry I didn't catch this before uploading. Was very focused on fixing bug...

Thank you for telling me, will deploy HOTFIX asap.

EDIT: aaaand done! v1.0b is up...
EDIT2: Earlier bug is back (that 1.0a supposed to fix), sigh... hard day. Will try again tommorow. ;)
EDIT3: Found semi fix added in v1.0c. character will still stuck in the ground under certain circumstances, but now can climb back with ladder - un-stucking itself.

Personally I like most Day 2 music, do you have favourite track?