So you are saying you have =4= buttons in addition to 4 more with arrow keys ?

I don't see a problem.

Which item to use ? Use left and right arrow keys to select.

Z & X standard agree or disagree to queries. No more accidentally pressing Z and watching a healing potion get slurped up without a confirmation.

Press P to pause, you can create custom menus here too I am understanding.

And yes, the 60fps sounds interesting but if it doesn't work in browsers, likely I'd stick with what WILL run on browsers.

Rather have larger audience than greater ability.

the problem with using q/w is that people playing with anything other than a full keyboard (i.e. using a controller, or using a PocketCHIP) won't have access to the second player buttons, so you have to limit to up/down/left/right/z/x for compatibility

confirmation on potions probably a good idea though i have screwed that up more than once..

OK, how about this.

(A) use Item, must confirm to actually remove it from inventory, usage includes SAVE and LOAD.

Arrow keys move as normal. DOWN arrow backs up one step.

When you hit (A) you are presented with a menu and arrow pointing to it.

If you hit (B) from here it cancels out and returns back to the game. If not and you choose Scroll for instance, a new menu pops up.

And scrolls are entirely optional. I just think it would add to the game.

Fire shoots a fireball at the attacker. Chance for it to burn and continue to burn during combat for short while.

Ice shoots a snowball at the attacker. Chance for attacker to shiver during combat for short while.

Bolt shoots a Lightning bolt at the attacker. Chance for attacker to be immobile for short while.

You could also have a scroll called CRITICAL, which when used ups the critical hit ratio of the player.

As these scrolls are rare, it would be best for the player to save them for BOSS combat. The boss guards the stairs leading down to the next level.

What do you think of the small 16x16 pixeled critters ? Maybe could use so there are different monsters on each level ?

I have to ask what hardware players are using if not PocketCHIP or computer ?

even on pocketchip thats all thats available, you can't access the full keyboard

One program in PICO-8 I saw accessed the full keyboard (no arrow keys). I need to find this as I think you want it as much as I.

And the keystrokes above I mentioned only use 6-keys. Arrow keys (4), and (A) and (B). Nothing more.

In any case, what you've written so far is definitely playable, fun, interesting, and answers the age-old question. Does it have replay ability ?

Yes it does, and for that you definitely deserve congratulations ! :D

thanks! ive been getting the itch to make something again so we'll see where it goes

because i can't help myself, ive started working on a sequel in earnest.. 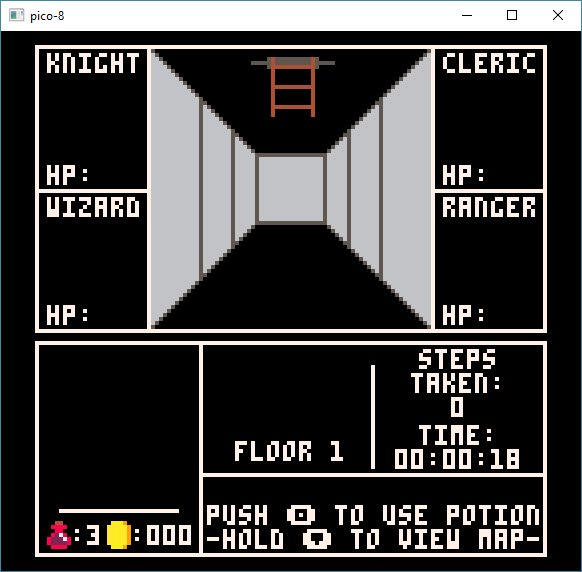 we'll see where it goes!

If you hold the map button and move, its like an actual map